I just had one of the most eventful weekends of my holiday *phewh* But alhamdulillah, everything went well. I have sooo much to tell you but for today I'll blog about Maher Zain's concert which my family and I attended on Friday night.
My family and I are major fans of Maher Zain. He has almost 2 million fans on Facebook and more than 1 million of them are Malaysians. Maher has a huge fanbase in Malaysia and as soon as they announced the concert dates we knew they'd sell like hot cakes. Good thing we bought them early because apparently the tickets were completely sold out. Imagine that... 9000 tickets for each night sold out! MashaAllah, he's very popular. We were absolutely excited and when we arrived we saw people of all ages attending the concert, from little kids to grandmas with walking canes! And the best part is we sat in the first few front rows.
Are you ready for the photos? 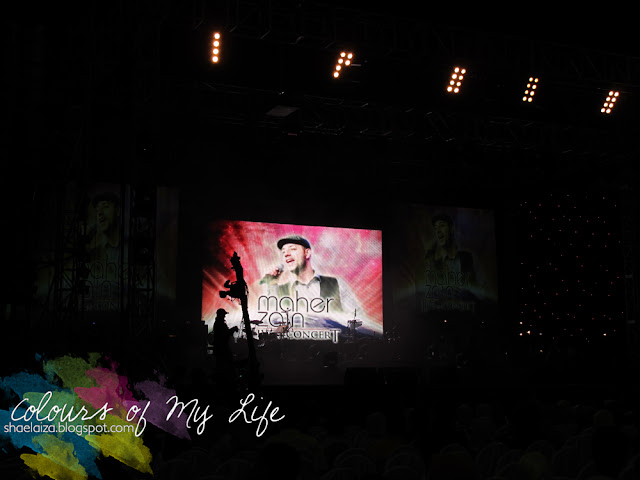 View of the stage from the back 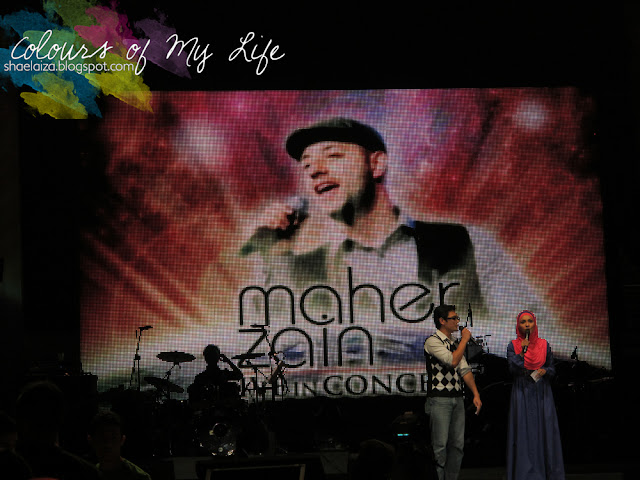 The emcees. I don't know who the guy is but Farah Adeeba is sooo pretty!
I met her once way back when I wasn't a hijabi or a blogger and she was the one who approached me and started a conversation with me while I was star-strucked. A real sweetheart who is beautiful inside out, mashaAllah. 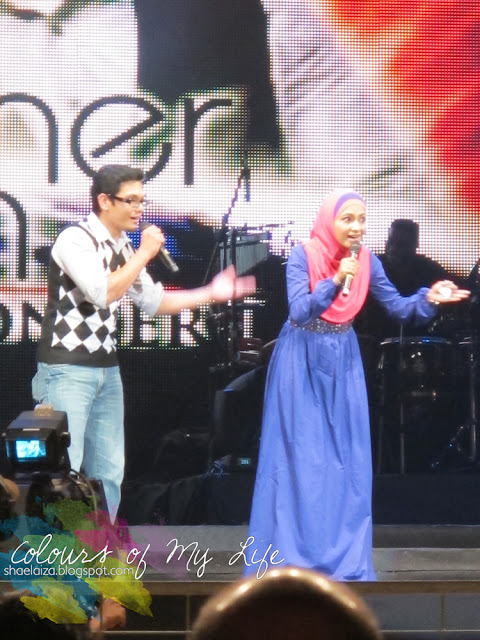 Emcees: Why are you here?
Audience: MAHER ZAIN!!!
Emcees: No, we're here because of Allah.... 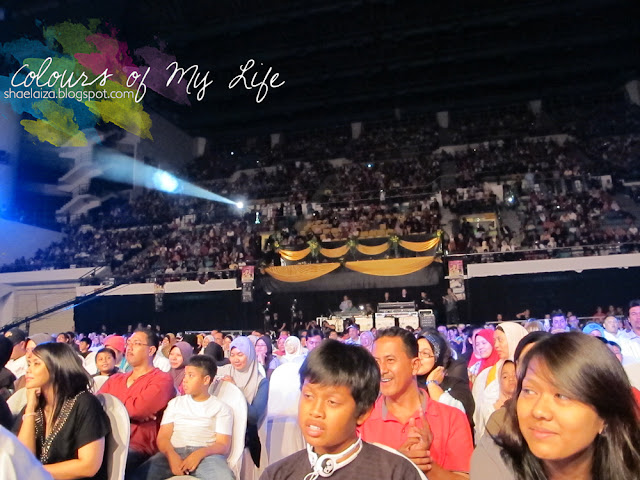 A portion of  the audience. The seats on the left and right hand side of the stadium were also filled up. 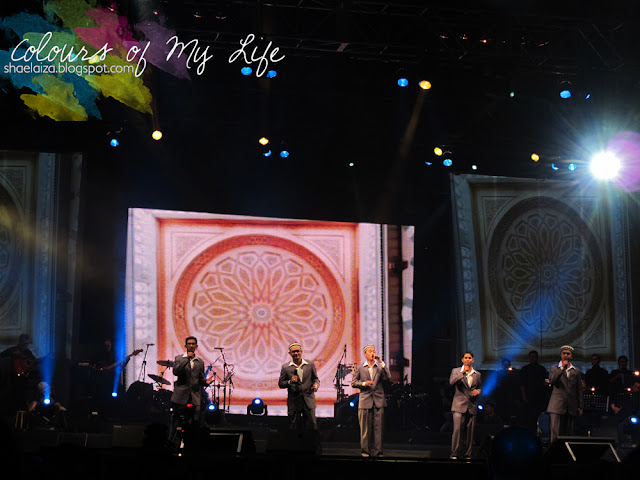 Malaysian nasheed group, InTeam, performed as one of the opening acts. 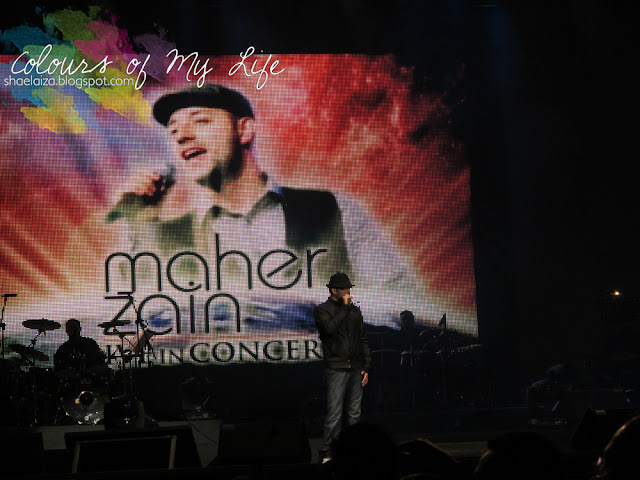 Irfan Makki also performed as an opening act with songs from his upcoming album.
He has a very soothing voice mashaAllah. 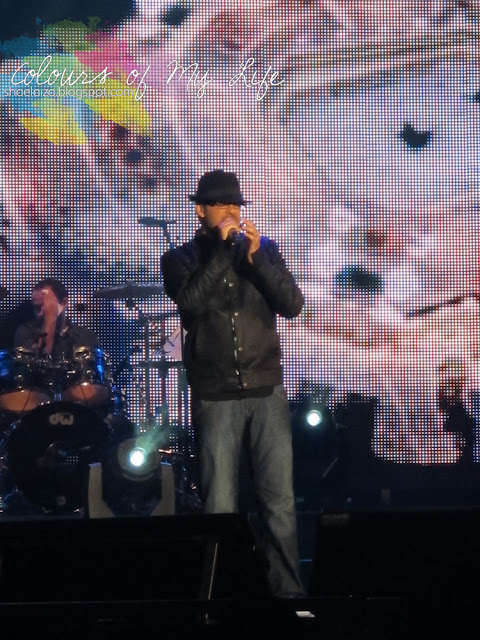 Come to think of it... he kinda resembles the late Michael Jackson, singing style-wise.
Aha,  I think a lot of people used to confuse his songs as Michael's. 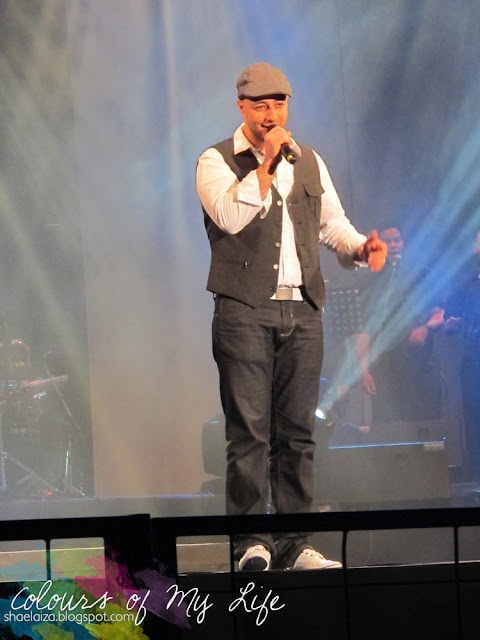 The moment we were waiting for. The one and only Maher Zain finally made an appearance!
He started the show with 'Always Be There'. 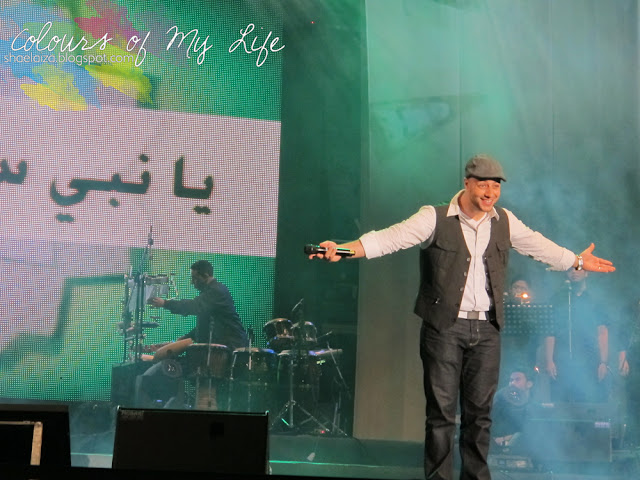 Funny shot! He sang 'Ya Nabi Salam Alayka' and asked the crowd to sing along with him.
He then performed a favourite of mine, 'Hold My Hand'. 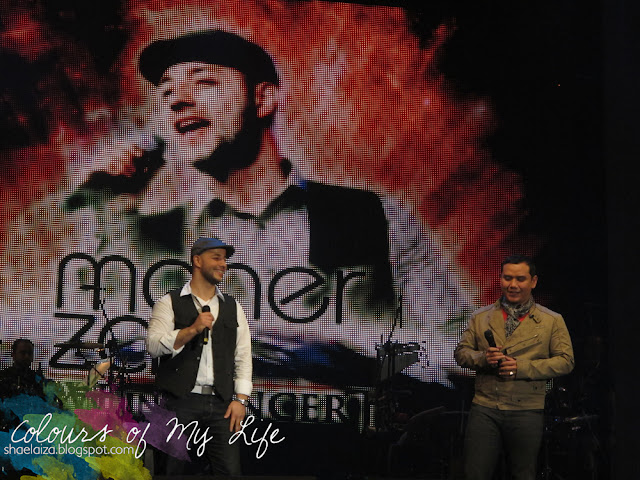 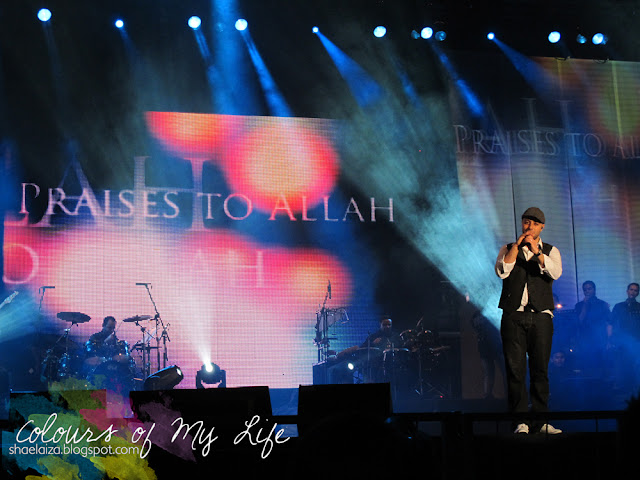 'Thank You Allah', is another one of my favourite songs from the album. Maher called it 'his song' and not because he wrote it. He described it as a song which very much reflects his personal life.
I think many of us can relate to it too. 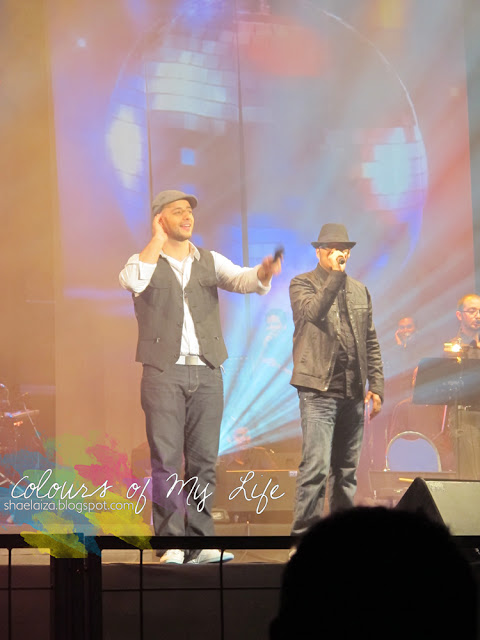 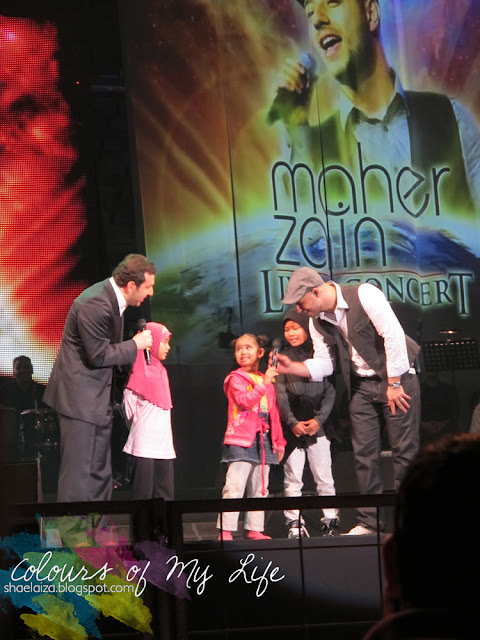 Another guest performer, Mesut Kurtis, serenaded the audience with Maher Zain by singing 'Never Forget' with the help of some children. 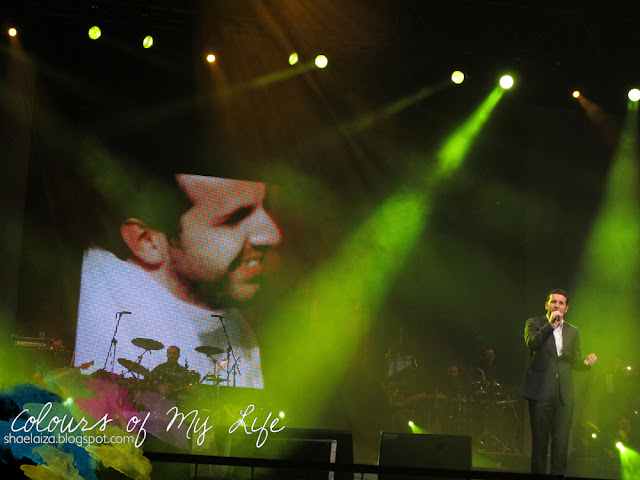 Mesut the Macedonian entertained us with his popular song, 'Burda'. I love it! 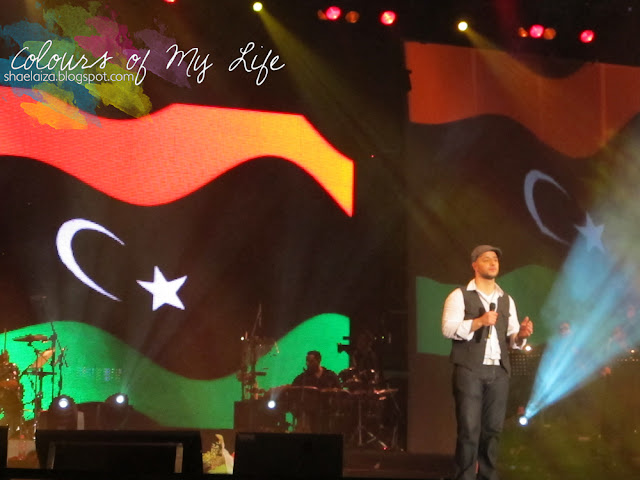 Maher surprised his fans with his latest single which he wrote only 1 and half weeks ago. It's called 'Freedom' and it was inspired by the recent  struggle for peace and justice in the Middle East and North Africa.
After singing 'For the Rest of My Life' and 'BarakaAllah Lakuma' the concert was almost over but the audience wanted more and he gave us exactly that. He didn't disappoint us by singing some of the songs again. The night got better when he belted out  the Malay-version of 'InshaAllah'! 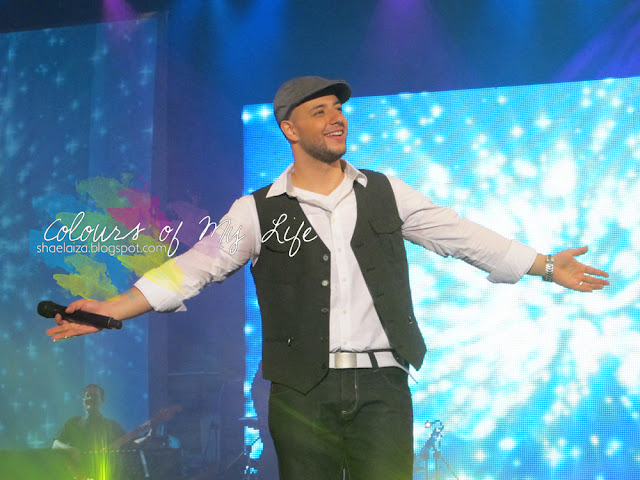 My favourite photo from the entire night!  This was taken at the end of the concert when lots of people with cameras including yours truly went to the front of the stage to get a closer look at the charming singer.
This shot perfectly portrays how we all felt at the end of the night!
Alhamdulillah a million times Friday's concert was amazing and a complete success. Although I do wish he had sung 'SubhanaAllah' featuring Mesut Kurtis. It's also a favourite of mine. I took heaps of HD videos with my camera but I don't think I'm allowed to post them online.  As much as my family and I enjoyed his concert  Vivy went on Saturday and told me she had a completely different experience. Apparently he forgot some  lyrics and he just wasn't in his element as much as he was on Friday. I don't know what went wrong. My guess? He was probably drained out. I heard he had been rehearsing for 5 consecutive days prior to the concert so it would make sense for him to be tired right? Allahu3alam. 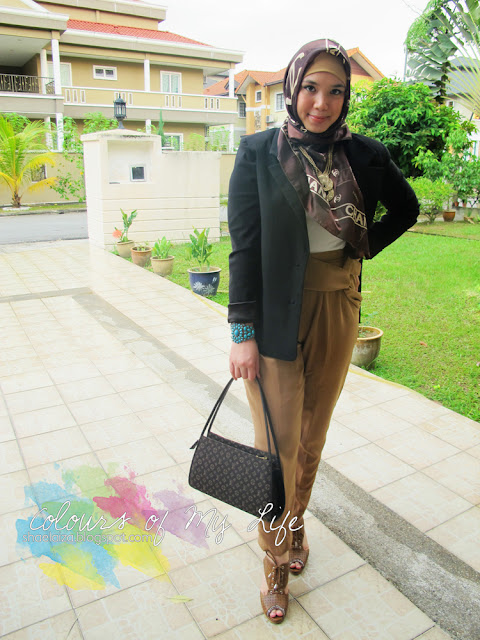 Before I forget, this is what I wore to the concert.
I wanted to look professional for some odd reason.
On a sad note, I'm leaving Malaysia tonight (it's already Monday as I type this). I feel all nostalgic right now. You know, like all of a sudden you look at your surroundings differently and just about anything can make you feel emotional and your thoughts seem to drift away so easily to all the fond memories. I'm going to miss Kuala Lumpur sooo much. I had my farewell lunch with Hana Tajima and the Scarflet girls on Saturday and with some of my girlfriends on Sunday. Thank you for making my weekend as beautiful as you all are! (will blog about the lunches next time)
Alright, I should probably go now. It's late and I need my rest before the long journey. Plus, I don't want to get all teary-eyed and emotional. Please make dua for me to have a safe trip to Australia and then New Zealand. Blog soon, inshaAllah.
Email Post
Labels: malaysia

amirahms said…
MashaAllah..u look beautiful sha.. have a safe trip back to NZ and take good care of yourself n iman =)
12:21 PM

Nurul Izz said…
My my! I envy u so much! I wanted to go the concert, tp all of my friends/family semua xmau temankan - and I didn't wanna go alone! So sad :( Hope Maher will come again to Msia. Anyway, have a safe flight, sis! :)
12:31 PM

daisy said…
There are scholars who said that music is generally haram.

With very little Islamic background, I can confidently say that I am in no position to comment whether its otherwise.

But one thing I know, in this modern cyber world, its really easy to get carried away. Any attempts in helping the 'ummah' to remember Allah is 'heroic' to me. So well done Maher!

RS said…
this is very random but I LOVE YOUR HANDBAG!

I've the same LV bag but different style and BIGGER. but it's the same material and print =D
12:56 PM

washi said…
Thank you so much for sharing your gorgeous pics...I love Maher Zain's music!

Making dua for a safe journey to you all the way to NZ inshaAllah...and looking forward to more posts..
4:45 PM

Zara A said…
Aww, its nice to know that you've had a lovely time there. Insha'Allah I hope you have a safe trip back!
Xx
6:09 PM

Chloe said…
Oh lucky girl!! I love his music :D I hope you've had an awesome holiday, and we get to see each other again soon! P.S do you have those photos from eid? Can you email them to me? xox
7:00 PM

Fitri Aulia said…
Love your shoes!!!
Anw, Maher Zain is my favorite singer. when he concert in Indonesia ya?

Emmy Z said…
Have a safe trip to NZ Sha..it was realllly nice to meet you and the other scarflets ladies x Hana T at Alexis.. good luck & all the best to you :)
3:38 AM

Anonymous said…
What a wonderful life you are living, I am so happy for you! :) Have a safe journey back to NZ.
10:44 AM

Magicfairy said…
Masha Allah, you look wonderful Sha. As always! :) Wish I had seen you at the concert. I also wish that they sing Subhanallah which is my fav song too!! Luckily he sang Palestine, which is also my fav hehe. Take care sweetheart!!
11:15 PM