This is how we spent our final day in Qatar. We checked out from the hotel after Zuhur prayer and went for one last tour around the city. We stopped by the Doha Corniche which is overlooking the harbour and the city's skyscrapers. I was mesmerised by the colour of the sea. Even though it was at least 40 degrees celcius I couldn't help but stay for a while and take lots of pictures. 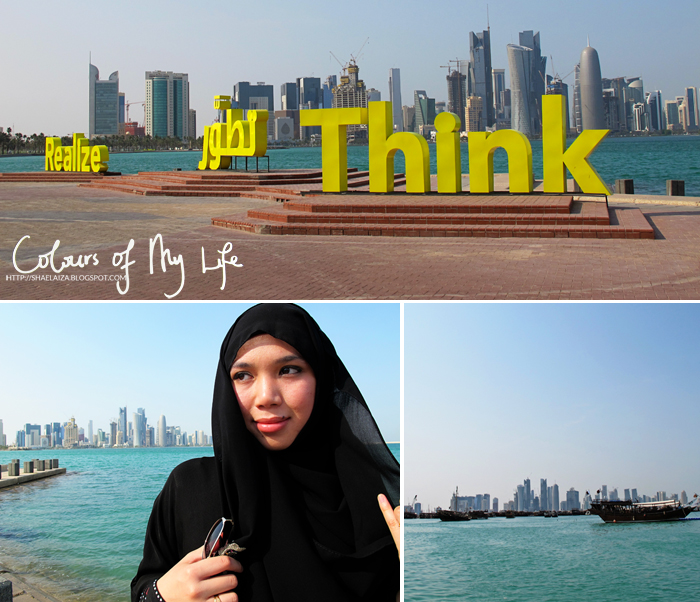 The view was breathtaking. I was tempted to jump into the sea and swim! The water looked that good. 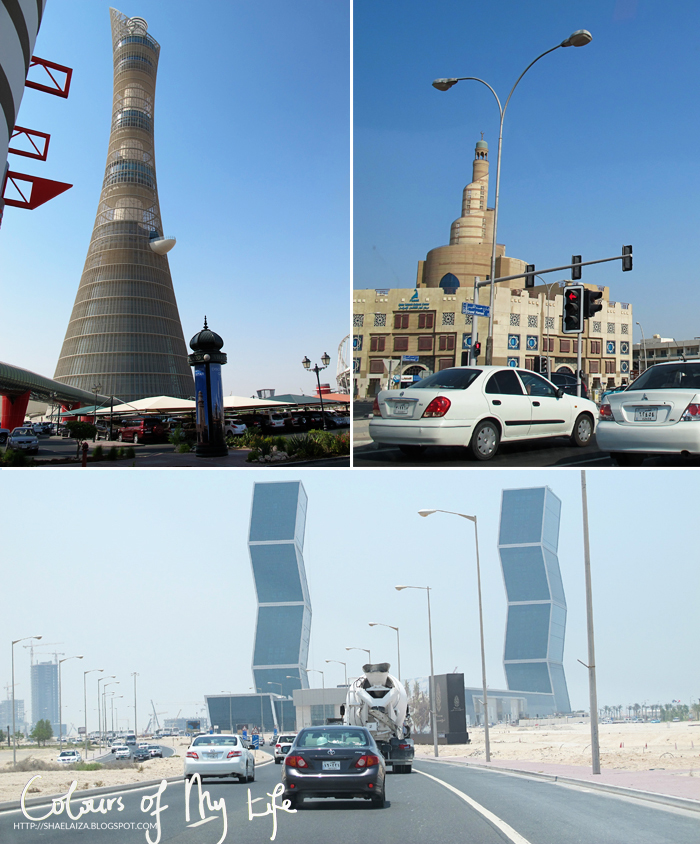 Another thing we noticed about Doha is that it has some very interesting modern buildings. The ones in the bottom picture made my family and I wonder how it could possibly be built like that. The genius of architecture and engineering combined, subhanaAllah.

We wanted to visit the Museum of Islamic Arts but it closed at 3 pm. Therefore, our next stop was Katara Cultural Village. Now, because it was summer most of the events were held at night when it's a lot cooler. That's why we didn't see many people out during the day. Most of them would come out just after Maghrib prayer. 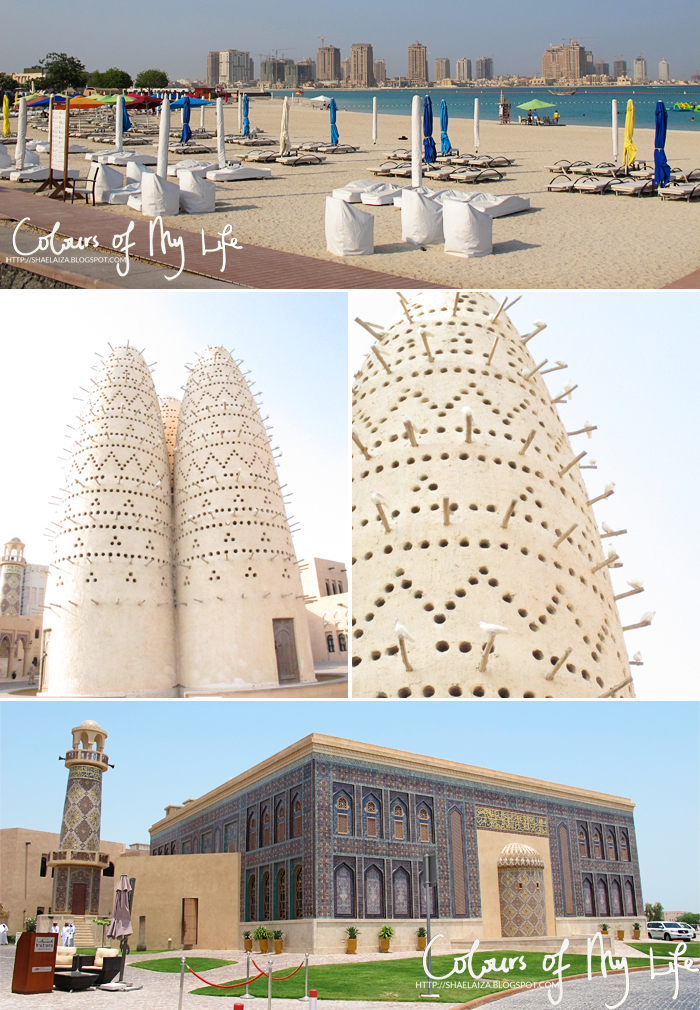 Katara Village is huge. Don't be fooled by my lack of pictures of this place. The beach is open at night only during summer and we were told it costs 100 Qatari riyal to swim and/or relax there. Those funny looking clay buildings are bird houses. Can you see the doves in the pictures? Pretty neat, right? And that's one of the mosques in Katara - Friday Mosque.

After all that sightseeing and walking we were famished. The buggy driver (yes they provide you with transportation at Katara because it's that huge) took us to an Egyptian restaurant called Khan Farouk Tarab. 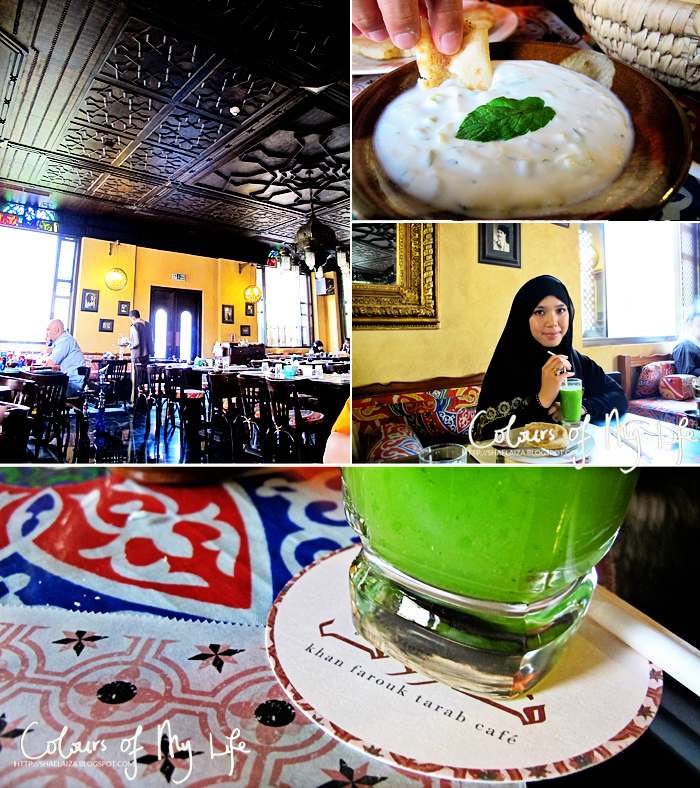 You already know I'm going to say this but I'll say it anyway. I loved the décor! Look at the colourful cushions and mustard yellow walls. The theme looks a bit Spanish or Moroccan, don't you think so? 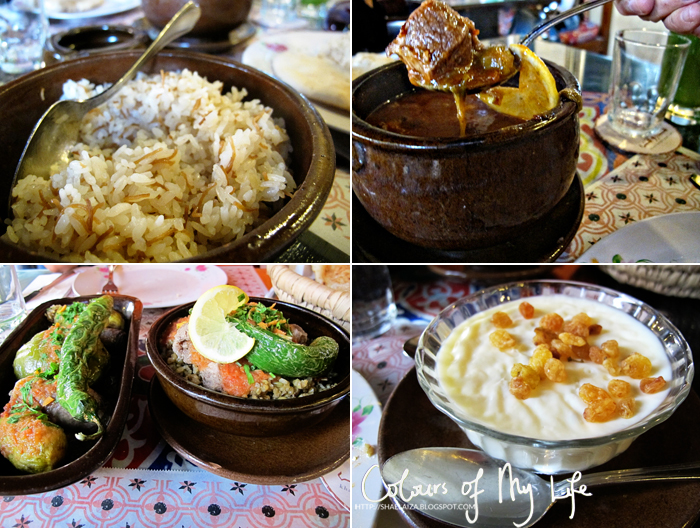 Food time! I don't remember the names of the dishes we ordered apart from the muhalabiya but everything was very delicious, alhamdulillah. I have to say, all the Arabic food we tried in Doha was exquisite, except for the ones sold  at fast food chains in malls. I tried Al Tazaj in Mecca and it was sooo good but I was really disappointed with the Al Tazaj in Doha.

After we filled our tummies we went to the Katara Amphitheatre where musical performances and plays are held. 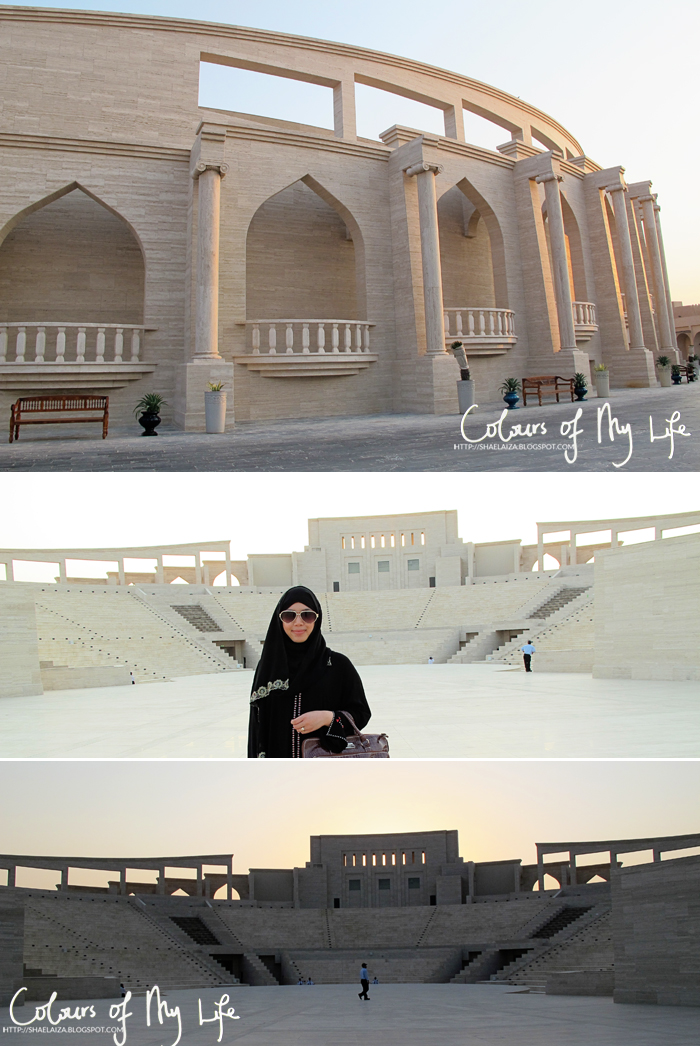 Stunning architecture isn't it? Made us feel like we were in Rome! As you can see in that last picture, the sun was beginning to set so we proceeded to the Friday mosque to perform our prayers. 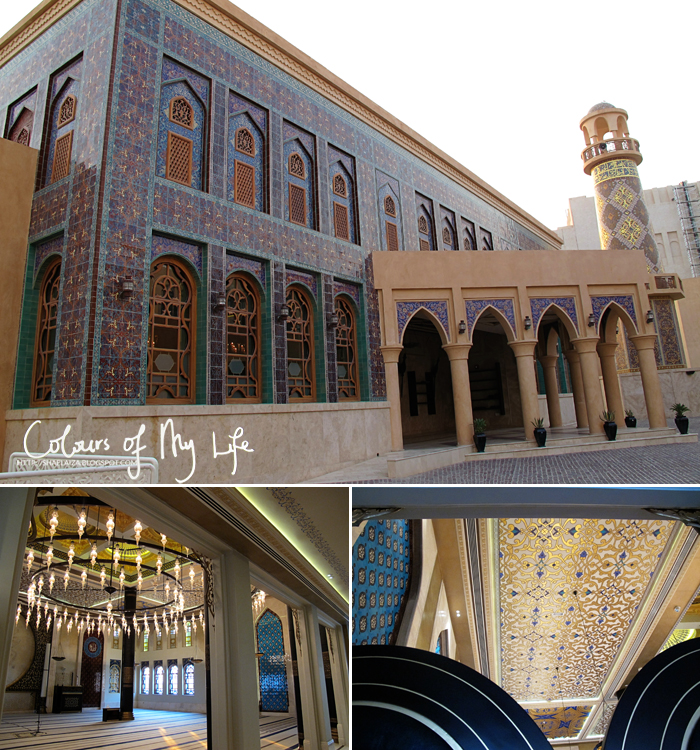 The Turkish and Iranian inspired mosque wasn't very big but it was absolutely grand inside. (Watch this video and you'll know what I mean). As we waited for Maghrib we listened to the Qur'anic recitation by the imam of the mosque. It was so beautiful we felt like were in back in Mecca, subhanaAllah.

Performing our prayers at the mosque was the perfect ending to our stay in Doha. After that we drove to the airport to catch our flight back to Malaysia. Alhamdulillah, it was a truly blessed trip and words can't describe how I felt. First, Madinah, Mecca, Jeddah and then Doha. We felt sad to say goodbye to the Middle East but we all prayed that we would come back again, inshaAllah. I know people say horrible things about the Middle East. Especially in the West. Putting aside all the negative practices that are usually unIslamic, I feel a deep connection to the Arabic culture and the land. I always have ever since I was a child. I think I was 7 when I first visited Saudi Arabia. It was very foreign to me but something about it made my soul feel like I was at home.

It could be because some of my ancestors were Arab or it could simply be a coincidence, not that I really believe in coincidences...

Magz and Mez said…
The architecture is truly mind blowing! We stopped off at Doha on our flight to Lebanon but we had so many complications in the airport that I hadn't even had the time to take a foot outside, let alone see the airport properly. So bummed that we are only there for a two hour stop on the way back to Australia. Your posts have inspired me to visit the place someday so thank you. Hopefully on the way back home I'll keep my eyes open when we stop in the Doha!

Same attachment feeling here, I still look through all the photograph I gathered during my stay there.

Feda said…
gorgeous, gorgeous, gorgeous. Loving your travel pics! You're making me want to revisit mine. Love the mosques images, so colorful, and all of the yummy food. I never thought about going to Qatar, thank you for sharing!
12:11 PM

@Magz and Mez, your Lebanon pics are awesome. Hope you get to explore more of the Middle East next time =)

@Feda, of course I had to share ;) It's amazing how photos can momentarily transport us to a different place. I totally recommend revisiting your travel pics. Revisit away!
11:10 PM

Nai @ TPJ said…
Salam. U looked great in that abaya, dear! Would love to visit Qatar.. Might try for Dessert Safari, if they have one, like in Abu Dhabi...
8:11 AM