Faith Friday: The Muslim's Guide to Love (Part I)

Mufti Ismail Musa Menk. The Zimbabwean Muslim cleric is no longer a stranger in Malaysia. In February 2012 he paid his very first visit to Kuala Lumpur where he presented various Islamic talks and even hosted an exclusive ‘meet and greet’ session with his Malaysian Facebook and Twitter followers. However, for most Malaysians the highlight of his visit was the sold-out two-day lecture in University Malaya. The topic of his first lecture addressed issues regarding family life whereas the second lecture discussed ways we can be steadfast in our deen. This series of articles was inspired by Mufti Menk’s lectures.


The Fortunate Muslim Family: Divine Solution to the Fragmented Family (Part I)

And it is He who has made you successors upon the earth and has raised some of you above others in degrees [of rank] that He may try you through what He has given you. Indeed, your Lord is swift in penalty; but indeed, He is Forgiving and Merciful. {Surah Al-An’am, 6:165}

Allah (subhanahu wa taala - the Sacred and Almighty) tells us in the Holy Qur’an that mankind has been selected to be the Khalifah (vicegerents) on Earth, therefore He has taught us to feel accountable for everything around us, including our families. Our beloved Prophet Muhammad (peace be upon him) highlighted this when he said:

The journey towards a blessed and everlasting marriage begins with a proper understanding of what marriage means in Islam. One of the reasons why marriages end in divorce these days is because Muslims neglect to understand the Islamic perspective on marriage. In Islam, marriage is a sacred union and it is highly encouraged for it is a form of mercy that Allah (subhanahu wa taala) has bestowed upon us so we may find [Halal] love and companionship in our lifetime. 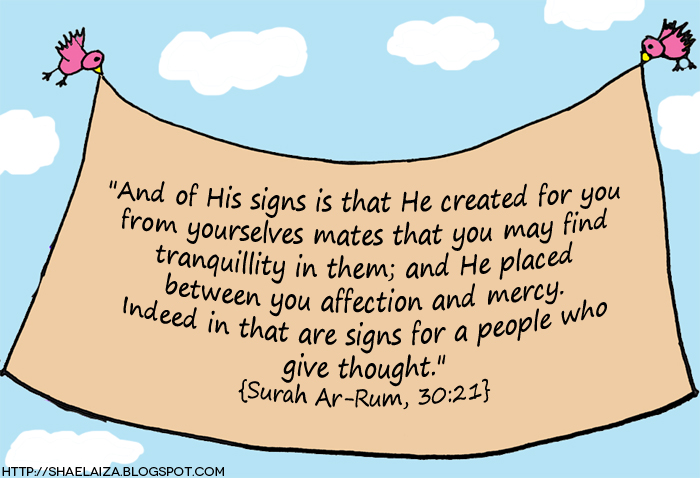 However, marriage is also a form of worship because when a man and a woman make the conscious decision to marry, they not only enter into an agreement with each other but also with their Creator, Allah (subhanahu wa taala). This agreement entails a serious commitment to fulfill each other’s rights according to Allah’s Sacred Law. It is the duty of every Muslim to know what their rights would be as a husband or wife. For example, a wife’s basic rights include kind and just treatment and the provision of food, clothes and a safe home. At the same time, a husband also has the right to expect gratitude from his wife for all he has provided for her.

Having said that, to fulfill these rights we must have complete faith in our marriage and spouse. The best way to achieve this is by choosing the right spouse.

In many cultures, families still play an important role in introducing a potential husband or wife but today it is common for Muslims to be friends before marriage and get to know one another prior to getting married. Hence the golden question: “How do we choose the right spouse?”

In the Holy Qur’an, Allah (subhanahu wa taala) has said:

“And marry the unmarried among you and the righteous among your male slaves and female slaves. If they should be poor, Allah will enrich them from His bounty, and Allah is all-Encompassing and Knowing.” {Surah An-Nur, 24:32}

From this verse it is clear that Muslims are encouraged to get married. Additionally, it proves that although Islam permits a man to have more than one wife, a woman’s first preference should be to marry an unmarried man.

* The word Al-Ayama, the plural form of Ayyim, is used to describe a woman who has no husband and a man who has no wife, regardless of whether they have been married and then separated, or have never been married at all. Al-Jawhari reported this from the scholars of the (Arabic) language, and the word is applied to men and women alike.
(Source: Tafsir Ibn Kathir - http://www.qtafsir.com/index.php?option=com_content&task=view&id=2428&Itemid=79)

On the topic of choosing a wife, Prophet Muhammad (peace be upon him) once said: "A woman can be married for four reasons: her wealth, her lineage, her beauty, and her religion. Seek the one with religion. {Sahih Bukhari}

This is a famous hadith but what some people don’t know is that the same principles apply to women when they are choosing a husband as well. Mufti Menk explained the hadith does not mean we should completely overlook the physical attractiveness of a person but rather, when given a choice between a person with good looks but bad character and poor understanding of Islam and another person who is not as good looking but with excellent character and iman (faith), the one whom should be prioritised is the latter. Mufti Menk justified this by saying, “Because the interior blossoms as time passes. Did you notice when the wrinkles of the face increases, the wrinkles of the heart starts to disappear?”

Having said that, if you are fortunate enough to meet a person with all these ideal attributes then Alhamdulillah (Praise be to God)!


Some tips for the single Muslim 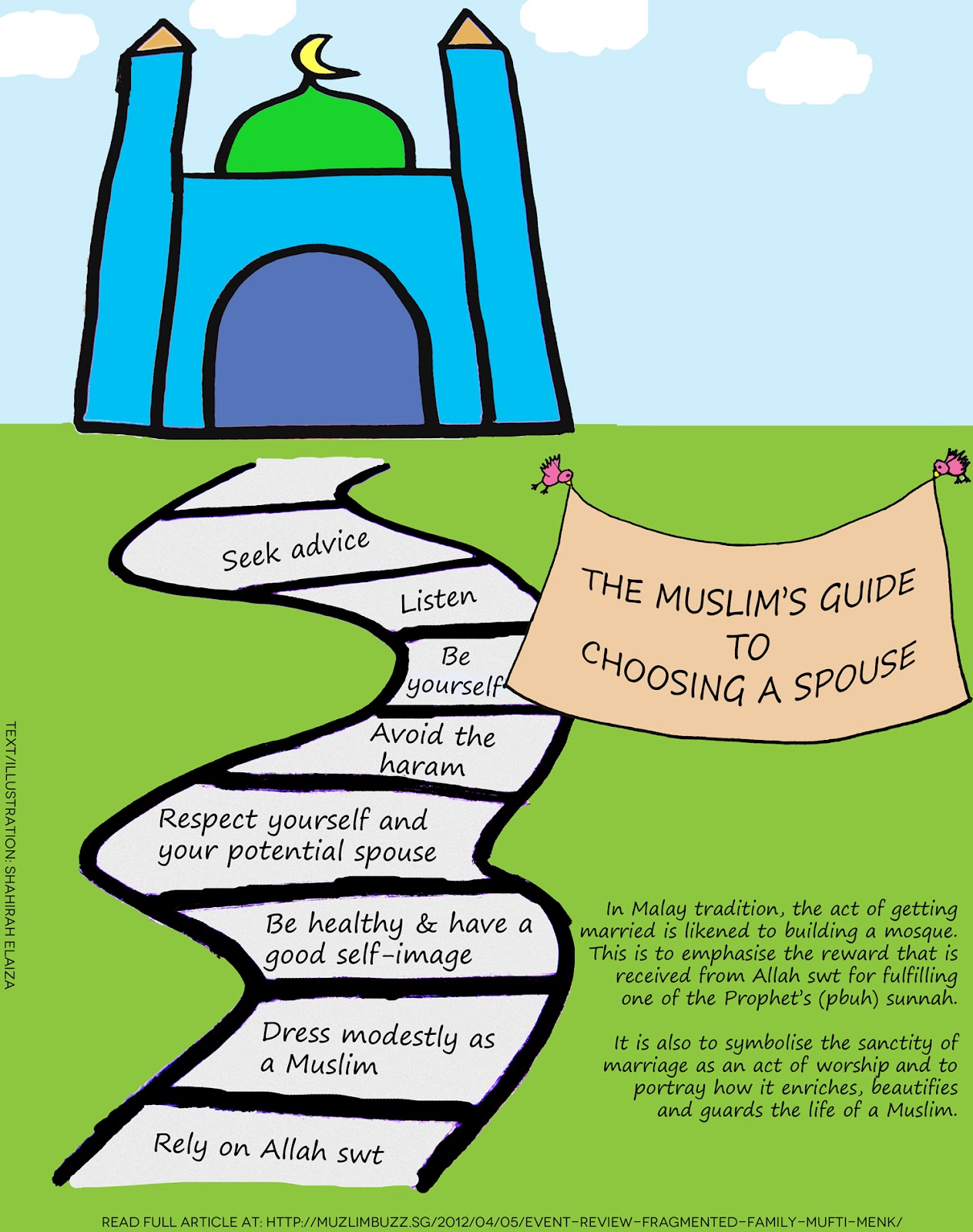 Rely on Allah swt. Read this du'a. Pray istikharah. There are moments in our lives when we don’t know what is the right decision to make. This is when we must humble ourselves and turn to Allah for His help.

Respect yourself and your potential spouse. It is recommended for Muslims to follow Islamic etiquettes and guidelines when seeking a spouse to purify your intentions and prevent any misunderstandings. Read about it the ‘7 Etiquettes of Seeking a Spouse’. If a relationship is bringing you further away from Allah, then it's a sign that something isn't right somewhere.

Avoid the haram. If you want to be on safe side, know that nikah kitabah (celibate marriage or 'nikah gantung' in Malay) is an option while you get to know each other and each other’s families. Remember that a marriage is not just between two people but also between families.

Seek advice. Consult your grandparents, parents and people whom you trust and respect. You can't put a price on their experience and wisdom. Also read books and articles to widen your perspective and knowledge on marriage. Check out the interesting ‘Before Marriage' articles on SuhaibWebb.com and watch Sister Yasmin Mogahed's lecture entitled 'Love, Marriage and Selecting Your Life Partner'.

Be yourself. Be honest about who you are and what you expect from your spouse. It's important to know that you have intellectual compatibility and similar values and life goals. Make sure that you can accept each other's strengths and weaknesses. If you can’t be honest from the beginning how can you lead a life together for the years to come?

Listen. Marry someone with a voice you are attracted to and whose speech pleases you. The way someone speaks says a lot about a person too.

Be healthy. Women should not feel the need to starve themselves to look attractive. No matter what shape you are, someone, somewhere, will be attracted to you and like you for who you are.

Dress like a Believer. Women who are not dressed appropriately when they meet a potential spouse are at risk of being enslaved to a particular image. As said by Mufti Menk, “What if you decide to become a better Muslim later and your husband does not approve [of your modest way of dressing]? Then you are enslaved to that forever.” (Read full article at MuzlimBuzz.org)

Leny said…
Thanks for sharing this, Shahirah. Your Faith Friday posts are my favorite :)
12:56 PM

Anonymous said…
Assalamu alaikum sister.
If every young muslims understand this post,sure there will be no divorce at all in muslim community.

poshnmodest said…
I love mufti Ismail menk, I always attend his lectures when he comes to south Africa. Zimbabwe is a neighboring country so he is always around. He is very inspirational! Mashallah
5:17 AM

mustikasari said…
a very good article sha! thank you for the enlightenment ;)
6:44 AM