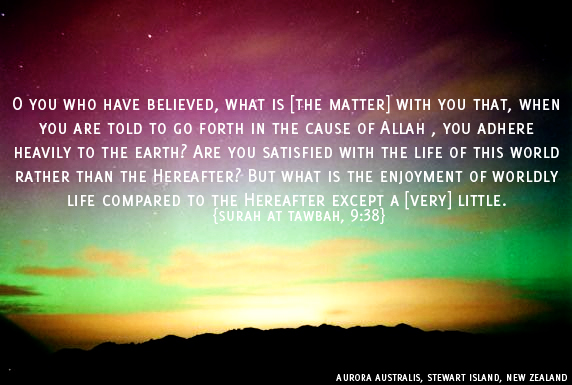 Ramadhan is all about jihad, the inner struggle towards human excellence and achieving closeness to God. It is a time of spiritual awakening and awakened is how I feel right now. I stumbled upon this verse in the Qur'an yesterday and it rendered me speechless. How many times have we delayed something that will please Allah (swt) because we wanted to please ourselves and obey our desires instead of obeying Him? How many times have we said, "Let's have fun now and deal with all that religious stuff later."?


It's a mistake to think we can chase dunya while chasing Jannah. The two are going in opposite directions.  Dunya is falling apart as I write this and the afterlife is what awaits us. The reality is we can only use dunya as a means of chasing Paradise; to use every opportunity in this world to do good and perform ibadah (acts of worship). Remember, ibadah is not limited to prayers, dhikr, reciting Qur'an, Umrah, Hajj, sadaqah (charity) and zakat (alms giving). True ibadah begins with the intention to do it for the sake of Allah (swt) and does consist not only the actions of the limbs but also the heart, eyes, tongue and ears.

The word ibadah comes from the word 'abd, slave, and therefore ibadah is any act of humility which signifies and reminds us that we are Allah's slaves. It's understandable that the word "slave" makes people feel uncomfortable. Nobody wants to be enslaved to anything or anyone. We all want to be dignified and autonomous human beings. However, we were created in such a way that it is impossible to not be "slaves" because as humans we can be enslaved by our physical desires, emotions, the people in our lives, and social expectations (e.g. society's definition of success and beauty). All this create something we, as Muslims, call dunya and to counter this Allah gave us Islam which tells us to obey God instead of dunya.

But if you really think about it, being a slave of God is to not actually be a slave at all. Obeying Allah (swt) releases us from being slaves in dunya. Plus, we aren't slaves in the sense that we aren't forced to work and we aren't working for absolutely nothing either. We are working for an everlasting Home in His Paradise which He has promised to those who believe in Him and do good in this world.


"And those who believe (in the Oneness of Allah) and do righteous good deeds, to them We shall surely give lofty dwellings in Paradise, underneath which rivers flow, to live therein forever. Excellent is the reward of the workers." {Surah Al Ankabut, 29:58}

The wife of Pharaoh, Asiyah (may Allah be pleased with her) understood this. She prayed to be close to God in Heaven and to be freed from the cruel and arrogant Pharaoh.

Subhana Allah. It is clear to me now. To be close to Allah (swt) is to be free from the enslavement of dunya. Yet so many of us still prefer dunya. That is why Allah asks us many times in the Qur'an about why we choose dunya over the better and everlasting Hereafter. It's as though He is saying, "Are you sure? Are you absolutely sure this is what you want?"

It's impossible to leave dunya (unless one dies, of course) but it's time to slowly detach ourselves from the love of this world. We say we are Muslims and we believe in Judgement Day and the Hereafter but we have become so attached to this world that we have forgotten that another life awaits us after this one ends. It's time to be awake in dunya. It's time to be like Asiyah (may Allah be pleased with her) and realise this life is temporary but the Hereafter lasts forever.

This is a reminder to myself, first and foremost. May Allah swt guide us to the Straight Path and strengthen our iman so we can begin to put dunya in our hands and not in our hearts, as Yasmin Mogahed often says. Ameen.
Email Post
Labels: Ramadhan reflections Ramadhan reminders

Magz and Mez said…
Such beautiful words! May Allah bless us all in this special month , Ameen!
12:01 AM

anonymous said…
loving your Islamic posts even more than usual lately. keep them coming.. they are so perfect for Ramadan mA :)
1:18 AM

Laila said…
Beautiful post! :) May Allah guide us for the right path, May Allah bless us in this blessed month.
HUbgs!
3:07 PM

Chahrazad said…
MashaAllah. Indeed, we have to free ourself from being a slave of this dunya. Ramadan mubarak dear.

@SARAH, alhamdulillah & inshaa Allah. Thank you for your words of encouragement =))

@Laila, alhamdulillah and thank you sis. Ameen to your dua!

Nazihah said…
Thank you for this post mashaAllah. Rather timely for me as I was struggling with similar issues recently. Have a very blessed Ramadhan Sha :)
3:19 AM

Shahirah Elaiza said…
@Nazihah, good to know this post has been beneficial to you. May Allah swt give you ease in your endeavours and trials.

Alhamdulillah. Everything good in this blog is from Allah swt, only the mistakes are mine. Ramadhan Kareem =)
4:13 AM