I'll be completely honest with you. Being in Mecca during this time of the year is no piece of cake. Well, for me at least. To be fair, Mum did warn me about how hot it would be ("It's like stepping into an oven" were her exact words) but how was I suppose to accurately imagine something I have never experienced before? Thank God I brought the strongest sunscreen I had! It was a real life saver after I underestimated the UV rays of the scorching sun and got pretty sunburned.

Mecca is also probably the busiest city in all of Saudi Arabia and it didn't help that our travel agent placed us in a hotel that was more than 200 metres away from al-Masjid al-Haram. I'm not very used to large crowds and it was pretty scary at first. Walking back and forth from the mosque for at least five times a day was a mission. Not impossible but definitely not desirable. I wasn't allowed to go anywhere alone because my family feared for my safety. I should probably tell you about the time they thought I went missing. My Mum and sister thought I was kidnapped because they couldn't find me at the hotel as we got separated after walking back to the hotel from the mosque. I thought the whole thing was funny because I was eating breakfast at the cafeteria the entire time my Mum, brother and sister were going hysterical at the Lost Children Centre. Clearly, it wasn't funny for them because when Mum called up the hotel room and I answered she was in tears. While they were there lots of people told them it was common for people to go missing in Mecca and that it was harder to find missing young women than children. As you can guess, it didn't make my Mum feel any better! 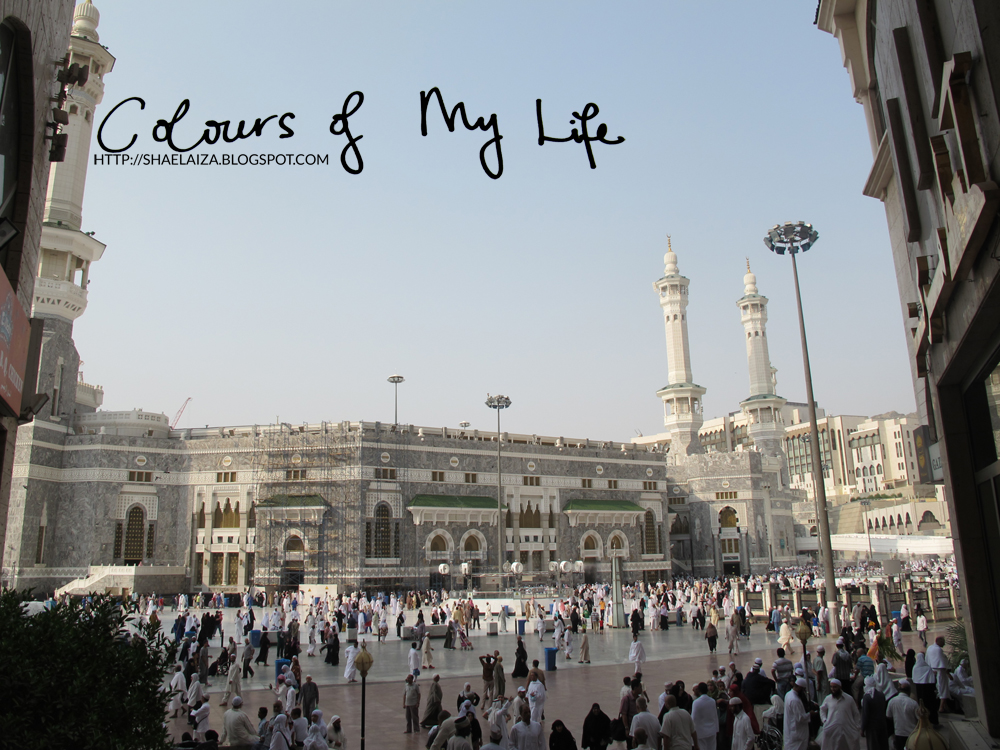 I find it ironic that the holiest city in the world is not the safest one. I think it's because not everybody goes there with the right intention. Plus, in Mecca you will meet people from all walks of life. From some of the richest to some of the poorest and destitute. You will find them all there but subhanaAllah, I feel very safe once I'm inside al-Masjid al-Haram. It is probably the only mosque in the world where there is no strict segregation between men and women. Of course, there are designated areas for each gender but for most of the part they have been very practical about the mixing of men and women. Many women go to Mecca with their husbands and families therefore it wouldn't make sense to not allow them to be together inside the mosque. I noticed that there are less female mosque guardians compared to before. I definitely saw them around but not many. I'm not sure why. They also don't go through people's bags anymore (it's the total opposite at the Prophet's Mosque in Medina). Again, I think it's because there are just way too many people going to the mosque and it would take ages for them to go through each and every single person's bag. The security is more relaxed hence making its visitors feel less anxious as well.


Thousands pray in Al-Masjid al-Haram everyday. It is the largest mosque in the world and according to the Holy Qur'an it is also historically the first place of worship on Earth.

"The first House (of worship) established for mankind was that at Bakkah (Mecca): full of blessing and of guidance for all the worlds. In it are Signs Manifest; The Station of Abraham; whoever enters it attains security; pilgrimage thereto is a duty men owe to Allah those who can afford the journey; but if any deny faith Allah stands not in need of any of his creatures." {Surah Ali Imran, verses 96-97}

Furthermore, Prophet Muhammad sallallahu alayhi wassalam conveyed: "A prayer in the Masjid al-Haram is akin to a hundred thousand prayers, a prayer in my mosque to a thousand prayers, and a prayer in the Bayt al-Maqdis to five hundred prayers." {Tabarani} If you want to know more about the Holy Mosque, Wikipedia has good background information about it. The centre of everyone's attention is the Holy Ka'abah. Muslims don't worship it nor do they pray to it. The Ka'abah is the direction of prayer and also where Muslims perform the tawaf (seven rounds of anti-clockwise circumambulation).

The Noble Prophet Muhammad (blessings of Allah be upon him) has said, "A person who circumambulates this House (the Kaaba) seven times and performs the two Rak'at Salat (of Tawaf) in the best form possible will have his sins forgiven."


I can't explain how it feels to see the Ka'abah right in front of your eyes and to be in its presence. As you can see it's a very simple building but it has grandeur because Allah subhana wa taala sends blessings upon it everyday. 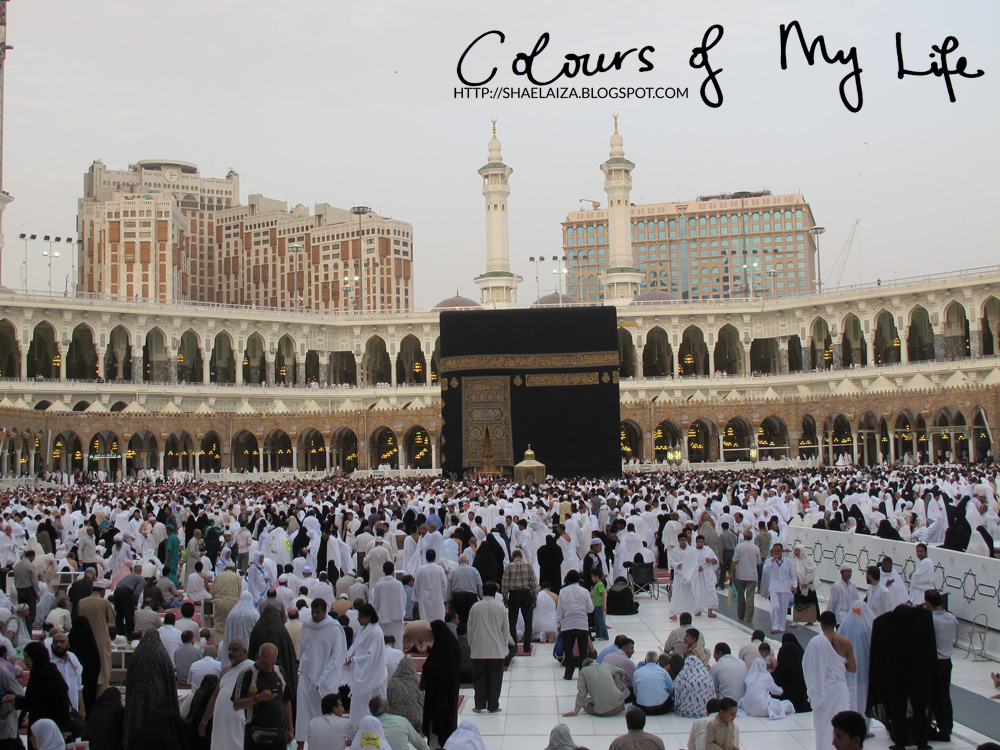 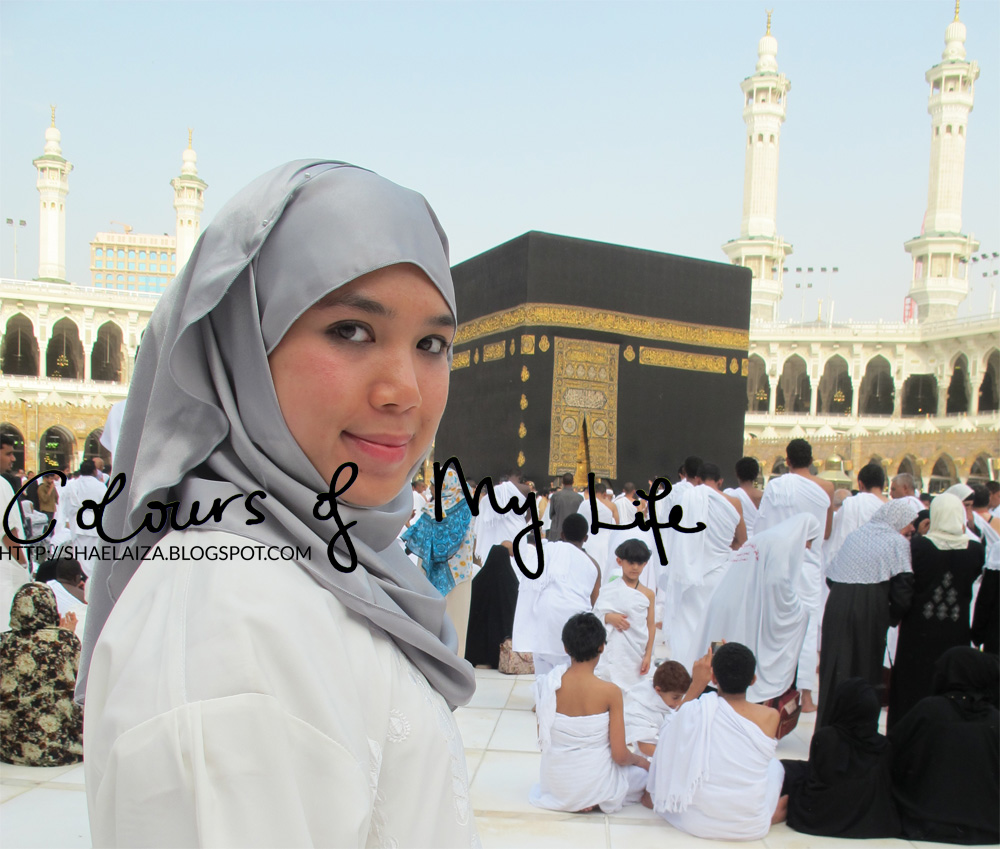 There is a part of the Ka'abah that is reported to be a stone from Heaven. It's called the Hajar al Aswad and to kiss or touch it would mean the expiation of one's sins. It's extremely difficult to physically get near it and I definitely don't envy its guard's job.

The Messenger of Allah (sallallahu alaihi wa-sallam) said: “The black stone descended from Paradise whiter than milk, but the sins of the descendants of Adam made it black.” {Musnad Ahmad and at-Tirmidhee no: 2577}


Ibn Umar (radhi allahu anhu) said: “I heard the Messenger of Allah (sallallahu alaihi wa-sallam) say: “Touching them both [the Black Stone and al-Rukn al-Yamani] is an expiation for sins.” {(Hasan) by at-Tirmidhee, no: 959 and (Saheeh) by al-Haakim, vol: 1, no: 664} (source) 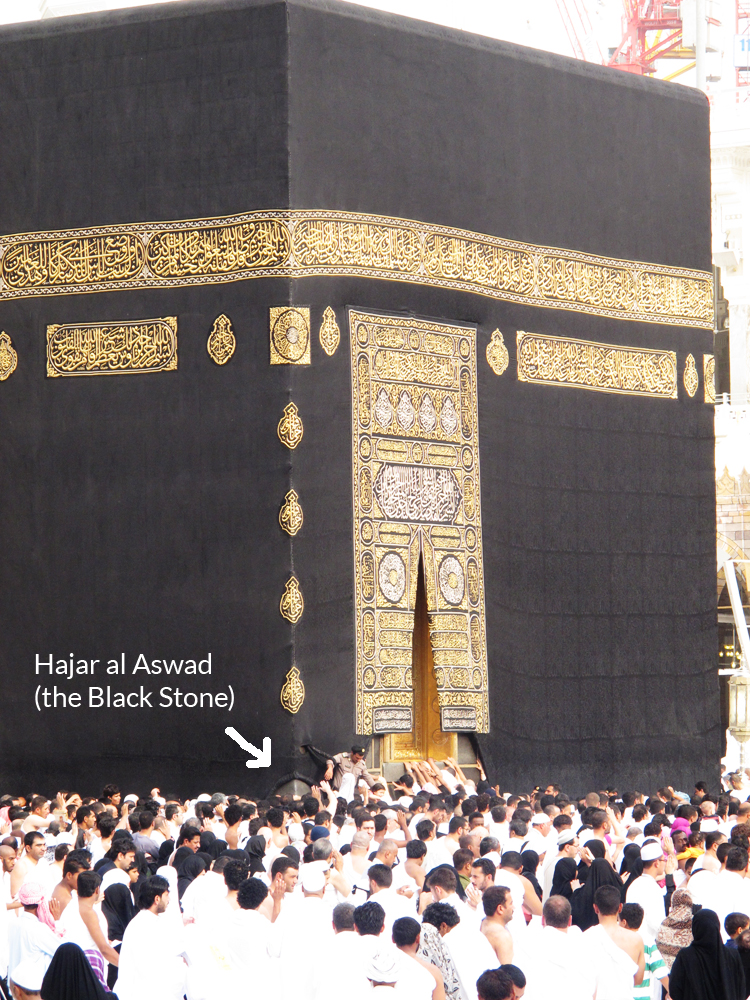 SaLuff said…
This made me teary eyed just imagining what it's like to be that close! I don't know what I would do if I could ever go there! I pray to have enough money one day inshaAllah
1:41 PM

Rahika Wahidah said…
read your entry had made me miss mecca immediately and cried. hopefully one day i will come again. InsyaAllah
2:01 PM

F Yusof said…
Yes, it was scorching hot! I went there last June and my nose bleed twice. Once in Medina and once in Mecca. And of course the holiest city isn't the safest place. I lost my hp and money there. Same goes to my cousin who went with me, he lost his hp, camera and money while taking wudhu'. Don't forget to try the delicious icecream! Hee fi aman Allah :)
2:19 PM

TheHijabieBabe said…
masha'Allah, you were surely blessed to go through this experience apart from the negative.. beautiful pics as well!
4:48 PM

♥Soso♥ said…
awwwwww so nice to know you went for Umrah

I went end of May and it was sooooo amazing.. I know the feeling:) Seeing your pics rushes bak memoriess and makes me want to be back there again

R S said…
the black stone - I've heard many stories about it when I was a kid in primary school! love your recent posts. so informative and interesting. =D

shea said…
Sha, there's something inside of me that just screammsss of wanting to go to Mecca and perform my Umrah this year... really2 bad i mean... i have been asking my mom and all about my intention...
please pray so that I'll get my chance soon, as with the help of your posts, everything seems so majestically beautiful, i neeeeeed to go!

Thanx for sharing your wonderful experience here Sha :)
12:53 AM

syakirahmn said…
i went there too, last june.
althought the weather is hot,its just dry with hot-dry-wind. overall, menjadi tetamu Allah was the best experience i had made!
what a beutiful place,missing mecca ;(

msdeeds said…
Being in Mecca is such an amazing feeling isn't it? I was lucky when i went there 2 years ago, there was not a lot of people so i managed to kucup the Hajar al Aswad around 4 times and pray at Hijir Ismail.

InsyaAllah would love to go there again, it's so serene.
8:05 AM

Anonymous said…
Can I know what camera & model u used? Pics really captures the beauty of this place. <3
7:25 AM

I'll be going for Umrah the day after next, and, wanting to get a clearer picture of how it will be, I stumbled accross your blog. Alhamdulillah, it has helped me enormously, in terms of mentally preparing myself for the weather etc. I hope to maybe get some tips or suggestions from you, as to how to better benefit from my experience in Mekah and Madinah, insyaAllah. thanks :)

Shahirah Elaiza said…
Nadira: Salaam! Please email me at elaiza _ (at) hotmail.com
12:20 AM