Abu Hurairah (radhiallahu anhu) reported: The Messenger of Allah (Sallallaahu 'alayhi wasallam) said, "(The performance of) `Umrah is an expiation for the sins committed between it and the previous `Umrah; and the reward of Hajj Mabrur (i.e., one accepted) is nothing but Jannah.''
{Sahih Bukhari and Muslim}

When I last went for an Umrah pilgrimage in late 2009/early 2010 I had never dreamed that I would be going back to Saudi Arabia so soon. As usual, our travel plans were very last minute as my original plan was to spend my winter holiday in Australia but subhanaAllah wa alhamdulillah, God had something better planned for me. This was in fact my fourth Umrah  trip but I was a young child during the first two times. All I can remember from those trips are vague memories with my family.

My previous visit to Medina and Mecca was in winter and the weather was pleasant and cool. The crowd gradually subsided as people completed their Hajj pilgrimage. This June my family and I went in the midst of an Arabian summer and a school holiday. Boy, oh boy, nothing could have prepared us for what we were about to experience. The weather was extremely hot, dry and dehydrating as temperatures reached up to 45 degrees celcius.  There were also tons of pilgrims especially from India, Turkey and Iran. I have never seen so many of them in one place in my entire life! Nevertheless, it was an honour to be a guest of Allah subhana wa taala and we were more than determined to do our best.

Our plane to Saudi Arabia flew directly to the second holiest city in Islam, Medina, also known as al-Madinah al-Munawwarah (translated as the radiant city). This is where the Prophet's Mosque (al-Masjid an-Nabawi) is located which is where Prophet Muhammad sallallahu alayhi wassalam and his Sahabahs (Closest Companions and Khalifahs) radhiallahu anhum were buried. Everyday thousands of people visit the mosque to pray there, hoping to have the chance of praying inside the ar-Raudah (area surrounding the Prophet's tomb) because it is known that all prayers made inside the ar-Raudah will be accepted (provided that the prayers are not evil in nature). The significance of this special area is explained in the following hadith.

Abu Hurairah reported that the Prophet (peace be upon him) said, "The space between my house and my pulpit is (raudah) one of the gardens of Paradise, and my pulpit is at my Fountain." {Sahih Bukhari, v.5, p.135}


Ar-Raudah is not very large and there are specific times for women to go. There is usually a wait of 30 to 45 minutes during non-peak seasons. The time sessions for men are more flexible and it seems that they are given more priority because relatively more men go to the mosque. 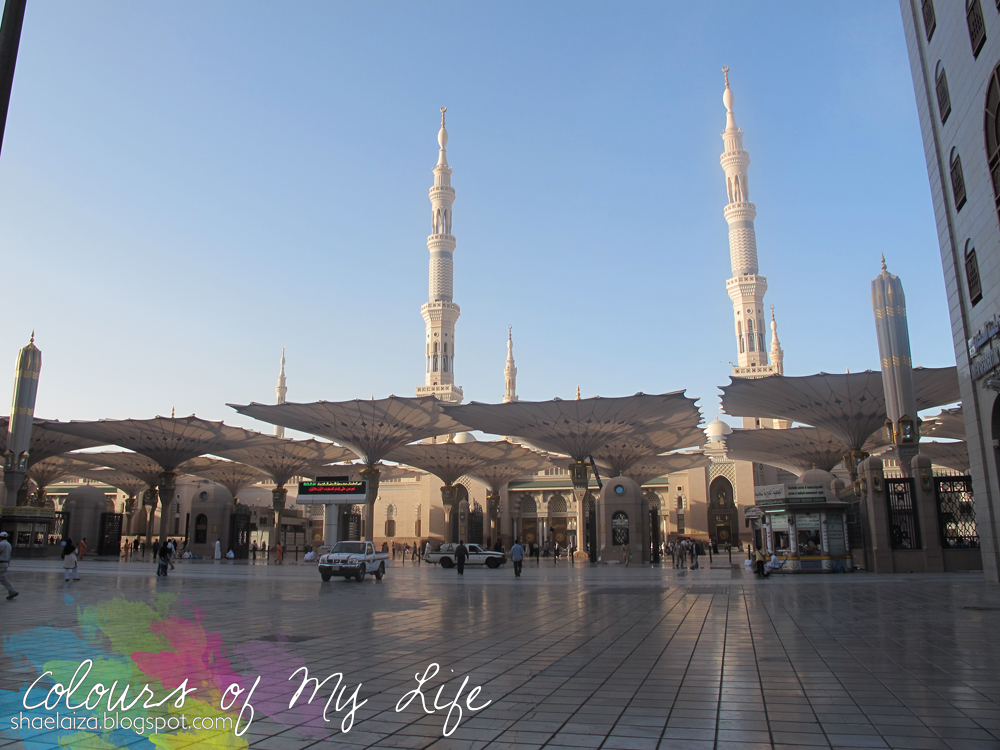 One of many gate entrances to al-Masjid an-Nabawi 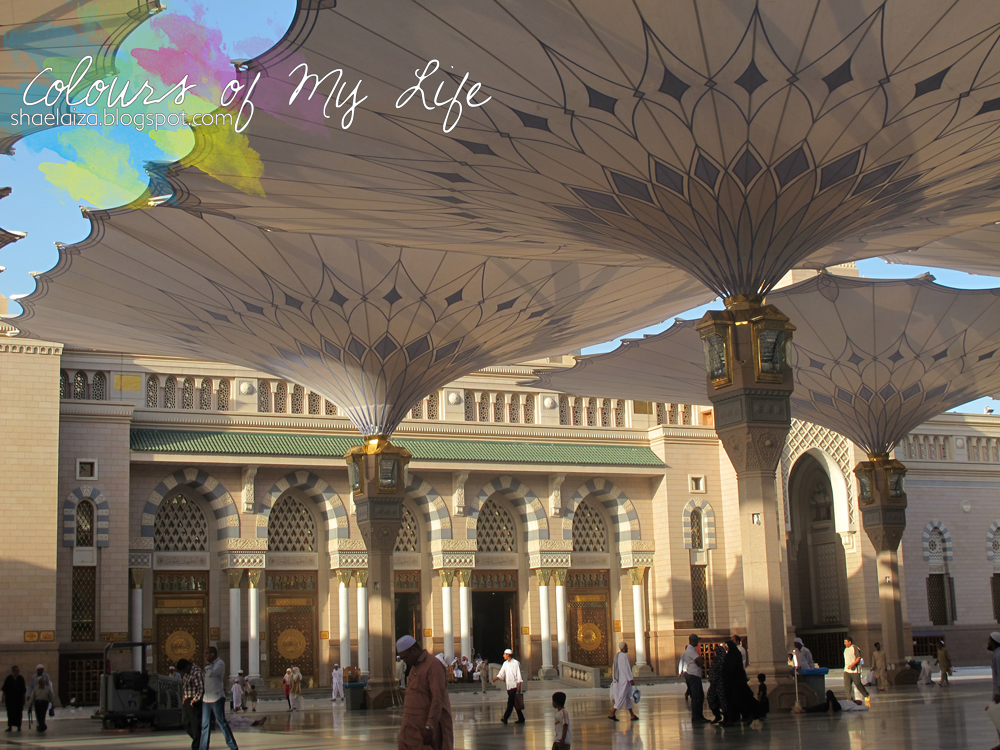 A vision of serenity outside the Prophet's Mosque

Although it is the norm for people to spend most of their time in this mosque it is also part of the journey for one to visit the Quba Mosque while one is in Medina. It was reported that Prophet Muhammad (s.a.w.) used to frequent the Quba mosque every Saturday to offer two optional prayers there and he once said,

"Whoever makes ablutions at home and then goes and prays in the Mosque of Quba, he will have a reward like that of an Umrah." {al-Nasa'i, Ibn Majah} 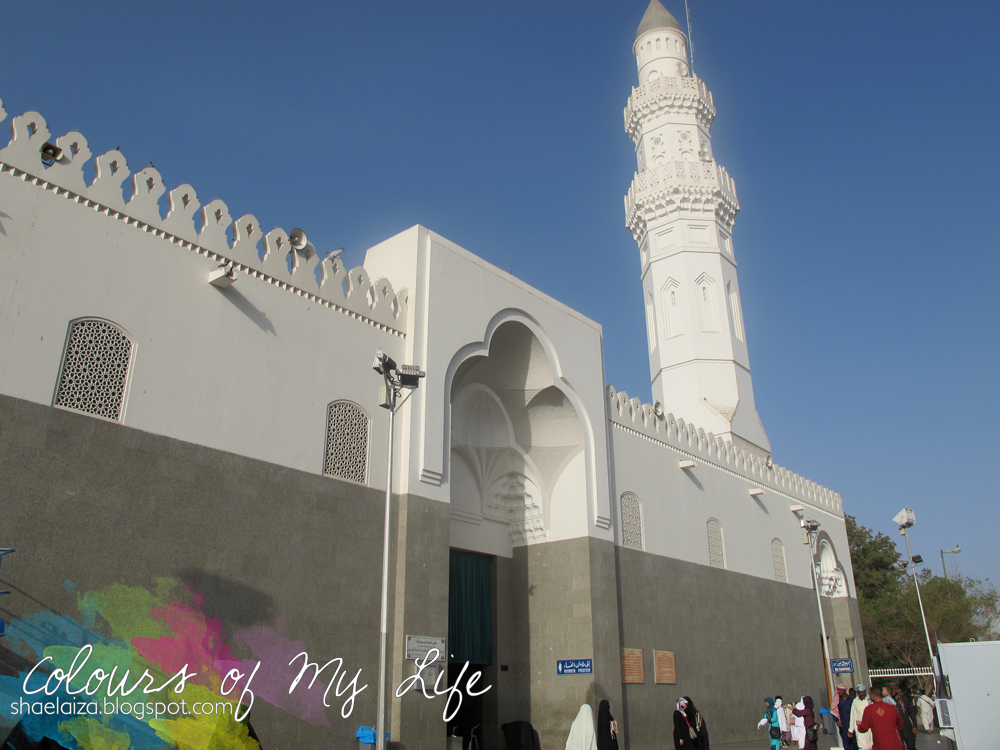 Women's entrance at the Quba Mosque 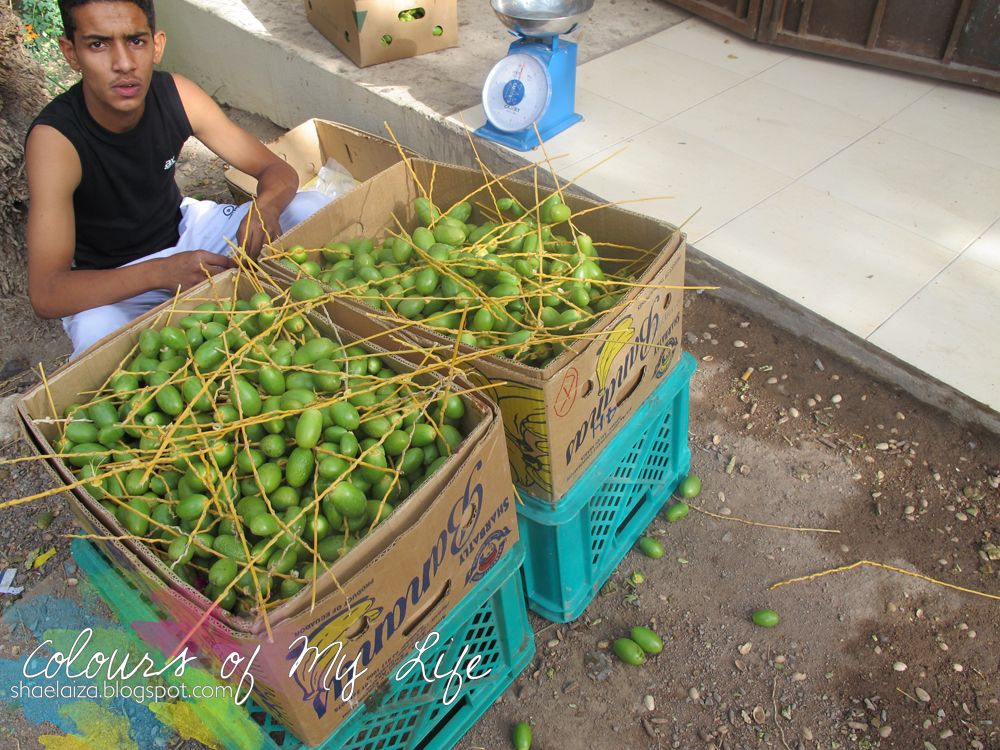 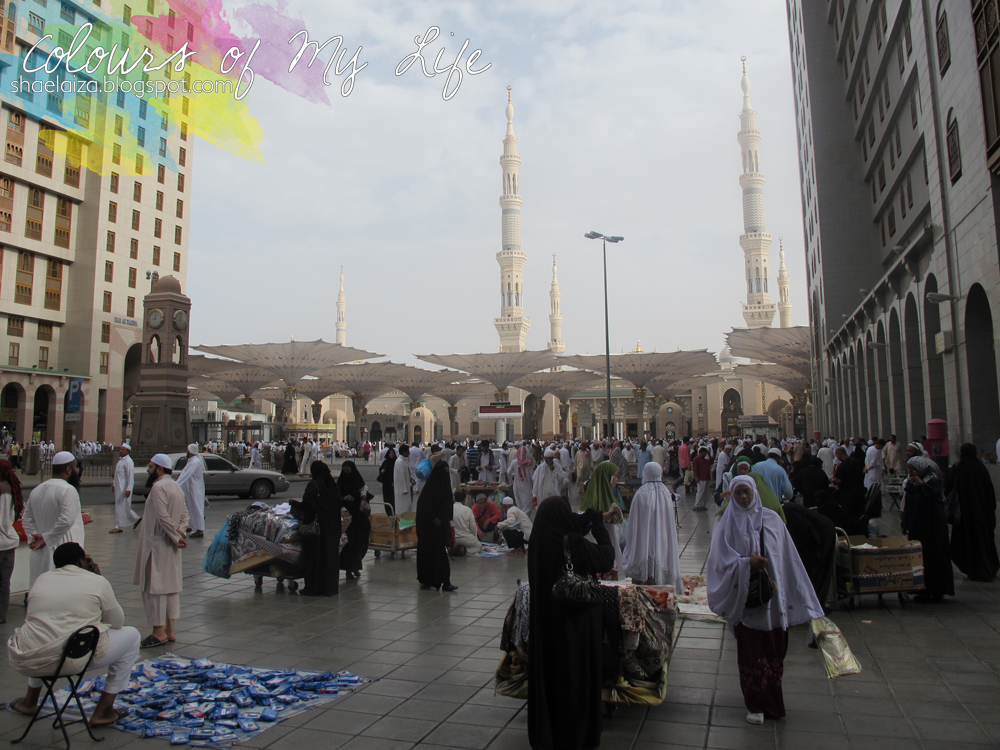 After prayers it is common to find street vendors selling various items ranging from the Holy Qur'an to siwak to cheap abayas and jewellery outside the Prophet's Mosque. They receive quite a bit of attention when some of them start singing in Arabic in order to attract customers.

Since I have a new and better camera this time around I managed to record a HD video of a walk I took towards al-Masjid an-Nabawi for Maghreb prayer. Have a listen to the adhan. Doesn't it sound amazing?

Maghreb adhan in Madinah al Munawwarah from Shahirah Elaiza on Vimeo.
(not sure why the video playback seems to be lagging on different laptops, sorry!)
Email Post
Labels: holiday and travels Islam umrah

washi said…
Jazakallah khair for sharing your lovely pics! When I went for haj in 2004, we were not allowed to take pictures at most places, so that's another reason I want to go back inshaAllah :)
Back then, haj was in winter, so I hope I can do an umrah trip in cooler weather also iA
6:34 AM

R S said…
I've always thought you're not allowed to take pictures once you're inside but apparently people sneakily do it anyway! hahah. wonderful pictures, you're truly blessed!
8:09 AM

starry eyed said…
hey sha, the photos look gorgeous! im going for umrah as well on july 16th. cant wait to see masjidil haram again. it's been 6 years since i last visited mecca. And reading your post makes me miss it so much more. So looking forward to the trip. Enjoy the rest of your holidays xx
1:28 PM

Aisha said…
firstly sooo good to have you back sha!!! thank you for sharing these pics and the vid, they're beautiful masha'Allah and the azaan in the video...gave me goosebumps. too beautiful to describe in words!!

may Allah [swt] always shower you with blessings and happiness <3
6:29 PM

Laila said…
MashaAllah! It's a beautiful place! I haven't been there! :( inshaAllah oneday I'll go there! :D My parents were there, but I and my sisters no :(
Hugs!
6:33 PM

rose said…
When I read this post, I'm transported back when I performed Umrah with my family back in 2007. It was in the summer too, very similar with your experience - since it's the summer holidays, people came in huge crowds to Mecca and Medina. I remembered once the temperature was 44 degrees C, but I'm not sure if it went higher then. I'm hoping to go visiting there in the future again and again. Thank you for sharing the photos :)
12:25 AM

Ida Ali said…
Masyaallah I was overcome with tears when I played the video. The last I went there was about 16 years ago and I long to go there again soon, insyaallah. :')
5:41 AM