Another year has bid us goodbye. 2010 was one hell of year for me. Lots of hard work and plenty of drama. I can deal with another year leaving me behind but what I almost can’t believe is that a decade has also come and gone. That’s right, 10 years! Just the thought of it makes me feel rather old. When I heard it on the radio I went speechless for a little while and started to think about how I spent the last decade of my life.

2000… I just began high school.
2010… I’ve completed my first degree at university.
A lot has happened in between. Joy, excitement, tears, struggles, revelations.
Ok, I won’t get all sentimental in this post. I promise. I’ll leave that for next time!
Anyhoo, last night my family and I went to Shah Alam’s i-City to watch the fireworks show. None of us had ever been there since it opened this year and I heard there was going to be a new year's celebration event there so we thought, why not? The place was absolutely crowded and we stayed in our car mostly, which was just fine because we got to watch the fireworks from where we were. Can I just say that it was the most spectacular fireworks show I’ve ever seen in my life? It went on for 5 – 10 minutes. It was AMAZING ya’ll. The crowd ooh’ed and ahhh’ed the entire time and when it ended everyone clapped.
I’ve never been to a fireworks show where everybody clapped in the end. Maybe I don’t go out enough but I think many of those who went to i-City last night would agree that it was a very grand show. (Fireworks are very expensive in Malaysia) 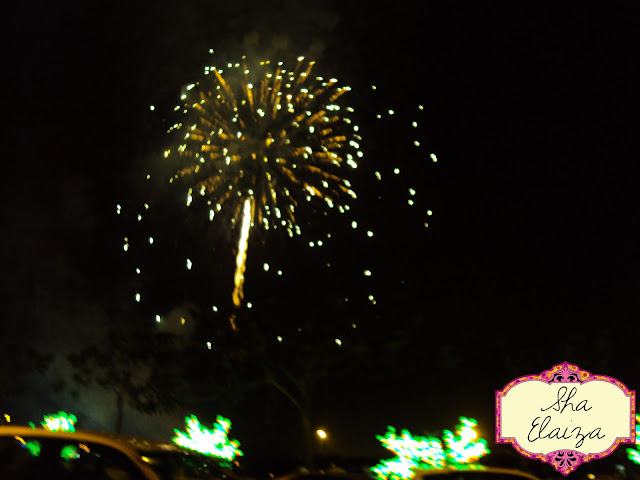 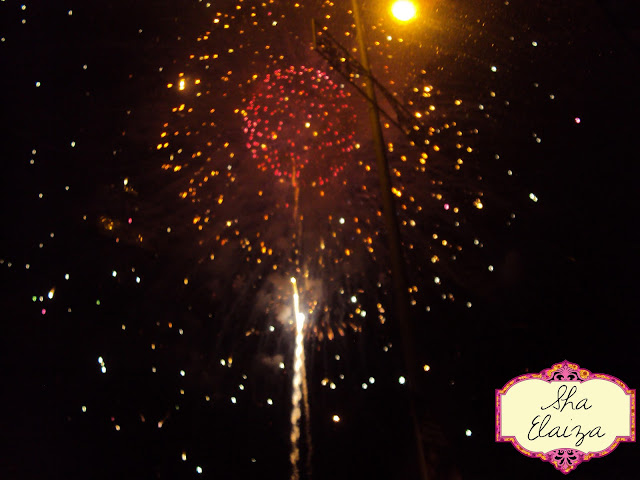 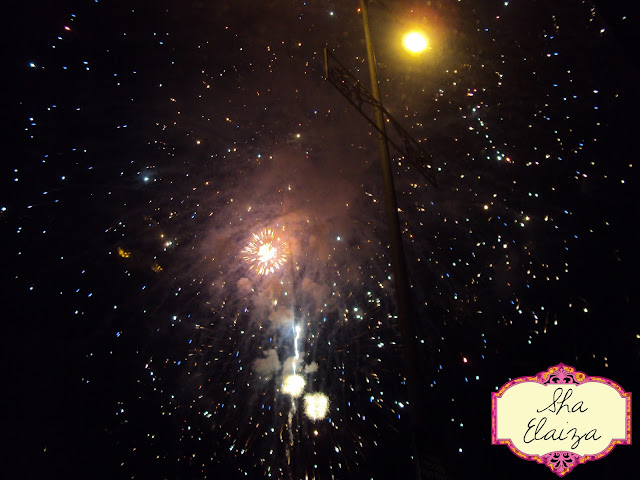 So what is i-City? To be honest, I didn't have the slightest clue until I checked out its website. Malaysia is always coming up with some allegedly super advanced centre of technology and what not. But I was aware of  its title as the City of Digital Lights. Apparently they have streets and restaurants filled with digital lights. We didn't have the chance to check out the entire i-City last night so we might go again sometime soon to see what the hype is all about.
But I just love their pretty trees that are made of digital lights. I felt like I was in Japan for a moment! 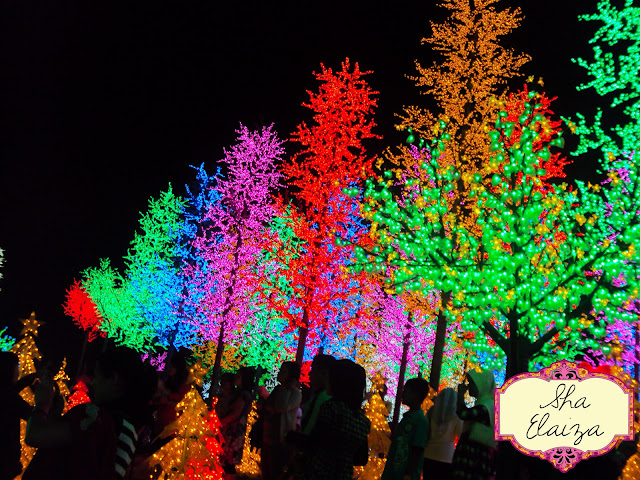 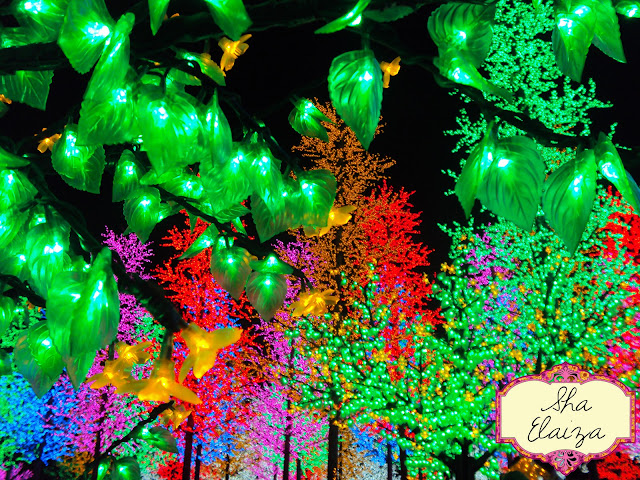 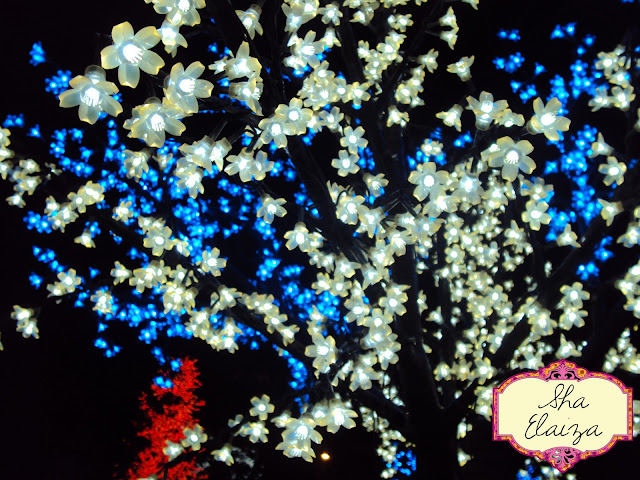 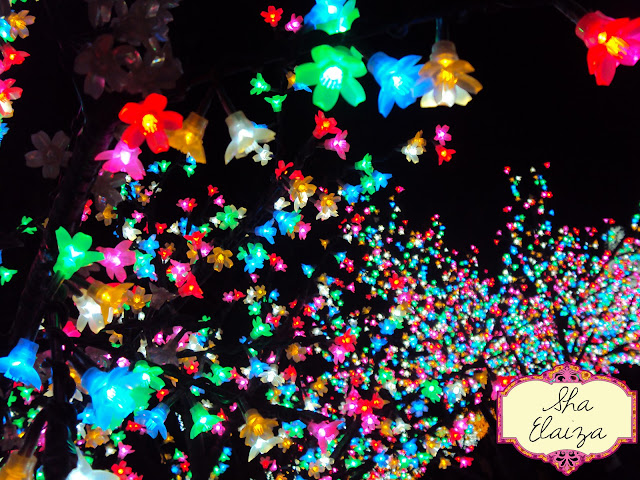 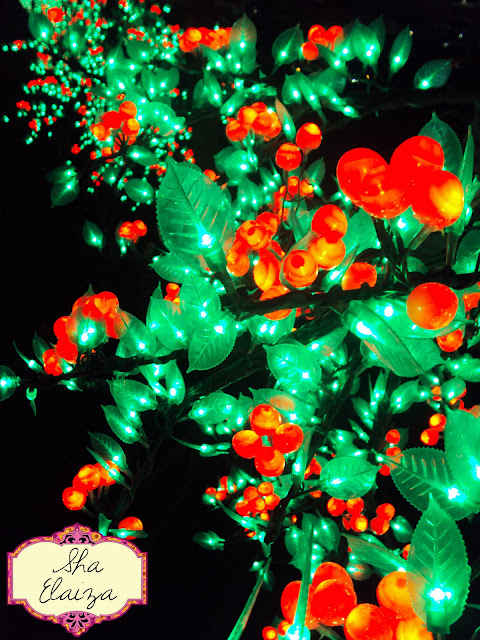 I hope everyone else had a good New Year's celebration. We arrived home at 2.30 a.m. because of the traffic jam. I wasn't grumbling because I know it would've been much worse in KL city centre. Once again, happy new year my lovelies! I have a feeling 2011 will be pretty exciting ;) InshaAllah!
By the way, what did you do for New Year's?
Check out The Guardian's photo gallery of  how others celebrated.
Email Post
Labels: malaysia weekend snapshots

Sahira said…
Those pictures are amazing! I've never seen anything like that before...how innovative :) Happy New Year to you!
11:02 PM

Under Urooba's Umbrella! said…
Those photos are BEAUTIFUL.
Happy New Year's Sha!
A whole decade!?! jeez, when you put it like that, lol.

Anyways!
It's kind of lame, but there's a blogger award with your name on it on my blog! it's my first blogger award so I had to participate, so hush now! And 'course I had to tag ya! ;) xoxo
4:33 AM

Fairuz Izman said…
THOSE PHOTOS ARE DEFINITELY 'COLOURS OF MY LIFE'! :D
6:12 AM

Zara A said…
Salaam sister,
Masha'Allah those fireworks are absolutely beautiful! It must have been breathtaking to see.. =)
My brothers birthday is on New Years Day so I'm going to a party. Wish I lived in Malaysia. Firework displays aren't that great here in the UK, :(
Insha'Allah one day I would love to visit Malaysia!
Have a lovely weekend x
P.S. Congrats on your university degree!!! I wish you all the best for 2011
8:10 AM

RS said…
all the lights make u feel as if you're on drugs or something. not like I know how that feels, but u know what I mean. Happy 2011!

Yunne Osman said…
sha, those pictures are awesome! you took a lot better ones than the one in my post. but then again, i used a very 'cikai' camera hahaha happy new year sha!
12:07 AM

Aisha said…
those colours are amazinggg!!!

i was at home with the sisters, trying to study. and then after midnight we decided to watch pride and prejudice LOL...soo guess who had the m ost fun =P
1:10 PM

-Amina said…
Those are some brightly lit trees. You would have really enjoyed the fireworks display in Dunners this year, i certainly did :)
12:13 AM

Happy New Year to you as well, and may Allah be with us along the way.

Shahirah Elaiza said…
Sahira: I would love to see how the place looks like in daytime. Perhaps not as mesmerising? HNY sis =)

Sluff: I know right? I didn't either. Now let's plan our retirement lol.

Mona Z: Me too! Colours are sooo pretty. HNY to you too.

Urooba: Yes a whole decade. If that doesn't make us in our 20s feel old... then I don't know what will! Thanks for the award, I dont think I deserve it lol. InshaAllah I will get around to doing a post about it =)

Zara A: Walaykummusalam. New Year birthdays are so much fun! Hope you had a wonderful time. InshaAllah you will be able to visit M'sia soon. And thanks for the well wishes =)

Fida: HNY to you too! InshaAllah khair.

Sorlisa: Thanks girly. Have a great year ahead!

Aminah: Are you kidding me? It's wayyy more festive in the US! lol These pics are deceiving.

Yunne: I couldn't find the pics on your blog. I'm sure they're not so bad. Selamat tahun baru!

Ashi: I love P&P too! Would've loved to watch it on NY.

Amina: I just realised I have never heard about how NY is celebrated in Dunedin. I'm never around during summer lol. Wish I was there though so I could've been with ya!

Yunne Osman said…
oh i only uploaded one on for wordless wednesday because the rest are all err, bad! LOL

muslimwife23 said…
mashallah, nice pics! inshalah you will be a blissful year!
6:54 AM

I meant to thank you for the nice comment left re. my baby, but I left it on the wrong blog...no joke.

Lack of sleep due to newborn not sleeping..*forgive me*
11:13 AM