Salam all,
I'm back in Malaysia for the next few months! I arrived on Friday night so I'm still terribly jetlagged and a tad disoriented. It's mainly because of the hot weather, I think. . . Okay who am I kidding? I miss New Zealand right now! I've become very accustomed to the laid-back Kiwi lifestyle. So much so, I take a bit of time to adjust to how hectic life can be in Kuala Lumpur. One of the things I miss about Dunedin is a bakery that I only recently found out about. It wouldn't be a big deal if it was opened everyday like any other bakery. This place is one of a kind. It is dubbed to have the best pastries in Dunedin but the catch is it is only open on Fridays from 6 a.m. to 10 a.m. and you've gotta be there very early in order to grab the yummies.
As some of you might recall I had my last exam on a Thursday and despite feeling and looking like a zombie I was absolutely determined to wake up at 6 a.m. to go there. I invited one of my awesomest friends, Lamya, to go on this 'adventure' with me (anything that involves trying new food is my idea of an adventure). We picked her up slightly after 7 a.m. and off we went to the Highgate Bridge Shop a.k.a the Friday Shop which is nestled in Roslyn Village. 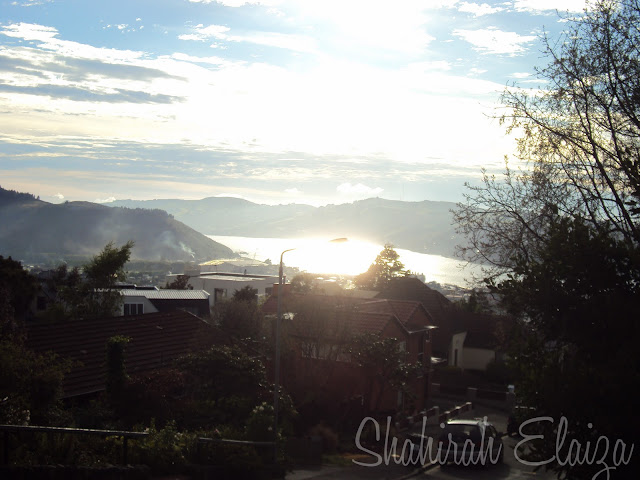 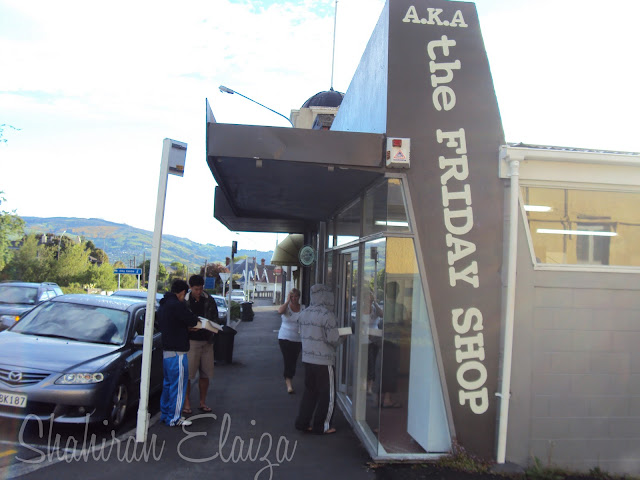 The bakery serves delectable French pastries by Chef Jim Byars who worked alongside Albert Roux in London’s legendary Michelin starred Le Gavroche restaurant. We arrived at 7.30 a.m. which I thought was pretty early then but later found out that if I wanted to see the entire variety of croissants, pastries and tarts I would have to be there by 6 a.m.! We walked in and I took a good look around the quaint, little bakery. The decor is minimal but it didn't matter because the centre of attraction is undoubtedly the drool-worthy food in front of us. 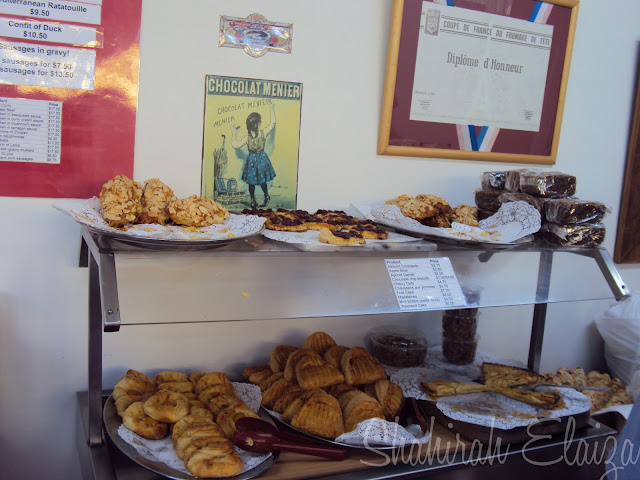 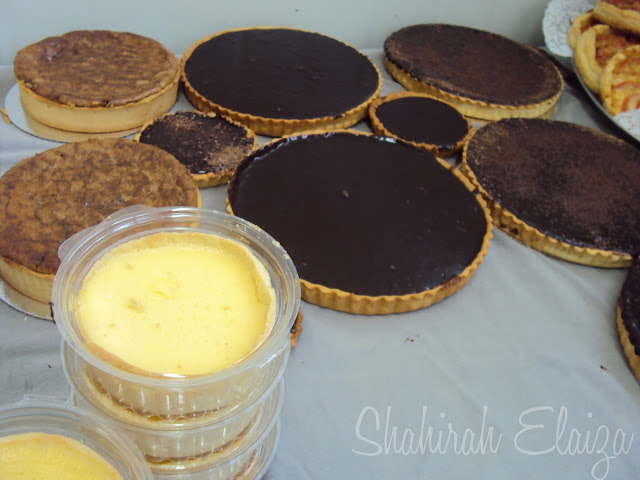 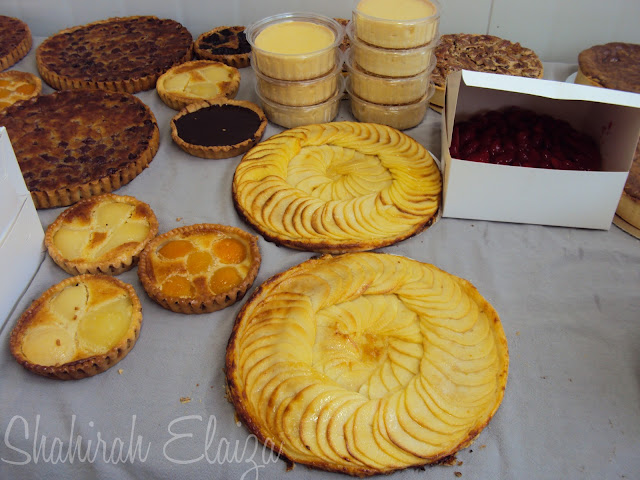 I was tempted to buy everything because of all the rave reviews I had heard. I spotted the divine-looking chocolate tarts and just when I was about to place one in a paper bag I got distracted by everything else in the shop. So guessed what happened? I forgot all about them and left the shop without buying at least one! I was so gutted when Lamya told me that they tasted heavenly. Yes, heavenly. We're both so in love with this bakery that we've already made sleepover plans at her place so we can go every week next year. As disappointed as I was I still felt pretty happy with what we brought home because everything I bought was ah-ma-zing! I couldn't believe that I didn't hear about this place before and that I had lived in Dunedin for 6 years without these pastries that were baked to perfection.
This is just half of what I bought that day. 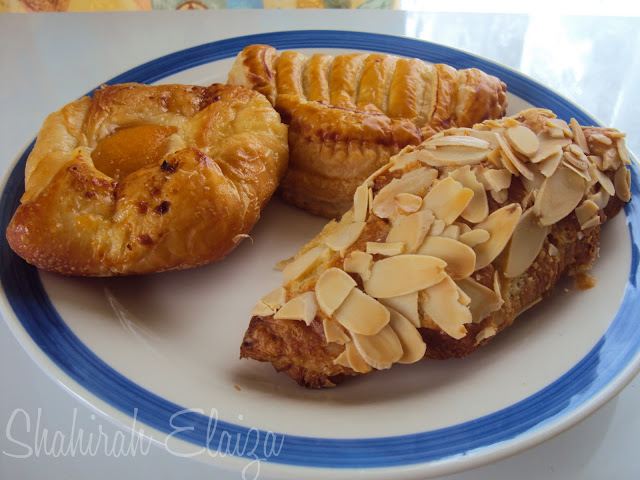 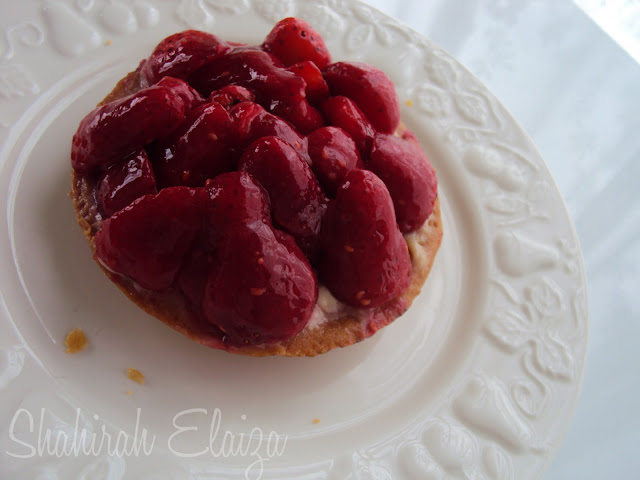 The Friday Shop also sells prepared dishes such as chicken in basquaise sauce, navarin of lamb, galantine of chicken, macaroni of salmon, leeks and mushroom, but I don't think they are halal. I'm not really complaining because I have more of a sweet tooth than anything else. I'm so happy we have this gem in little ol' Dunedin. I would love to have my very own Friday Shop someday. Who knows, who knows. . .
Email Post
Labels: culinary adventures life in New Zealand

ajjah said…
wow the tarts are super duper tempting
12:40 AM

Fairuz Izman said…
Wow they looook devine! I cant believe it only opens on one day...thats insane, I'd be waiting in anxiety for friday to come during the whole week.

Anonymous said…
Oh my God,oh my God,oh my God :))) my dear Shahirah what a great post...it made me dream =)!!!This place is a piece of heaven on earth :)!Im completely fascinated by it and I'm glad you shared it with us.I could go to New Zeland only because of this shop!
In Italy where I study there's also a pastry shop that I adore (it's not that gorgeous as this one) and whenever I go there I feel so good...or sometimes when I'm very busy I think to myself...just a bit more work and then I'll go there and give myself a pleasure of a great pastry =).
Hmmm...I'd like the idea of a Shahirah Pastry Shop :)!!!
Have a great stay at home :)!
Mwah,mwah...
5:05 AM

Muslim Girl said…
Aaah! This just ruined my morning bc now I am craving them so bad. They look DELISH!
7:38 AM

Rene´s Bare Essentials said…
Yum! So tempting im almost glad I dont have a pastry shop near my house. Otherwise Id be 100 kgs!
9:16 AM

hatim a.r said…
scrumptious!but why friday only??btw u shud totally have ur own bakery!
11:07 AM

Aisha said…
these look so gooood! im considering making a run to tesco to grab some baked goodies. though i doubt they taste better than these pretty looking lovlies!
4:20 PM

Smart CoOKie said…
It really do look ah-ma-zing! I love how exclusive the place is. It makes it more alluring. The pictures are so yummmmmmmmm. You shouldn't share such a thing with us without handing out a pie or something. :P
5:43 PM

-Amina said…
I am waiting so anxiously for Friday to come around. I want to try some of their pastries!
Mind you, waking up at 6am is gonna be a mission :p

ajjah: Tell me about it!

L&S: I think the chef only opens it on Friday because on other days he caters to hotels. That's what I was told. But it's the perfect ending to the week right? =)

Jasmina: LOL I'm glad this post made you dream of yummy things and reminded you of your own little favourite pastry shop. InshaAllah, one day I'll have my own bakery or cafe... someday,someday..

Muslim Girl: Dang, sorry! I really should be more considerate of other people's feelings next time =P

Rene: Me too! Good thing this place is only open once a week lol.

Sarah: Nom nom noomm... I realise that all I seem to blog about these days is food and fashion.

Hatim: He caters to hotels during other weekdays. Lucky hotels kan? Yes I would love to have my own bakery. InshaAllah, doa-doakan ok? =D

Aisha: Anything tastes good when you're really hungry so go treat yourself!

Smart Cookie: I know, I know. If I could give away food on this blog I actually would. Somebody should work on teleportation already lol.

Amina: Have you not tried them before? And you've been living in Dunedin for how long?!!! LOL
3:50 AM

ashieBee said…
ahhhhhhhh coffee shop like this. i miss those ones in london. sigh.

have a great time being back at home in malaysia ;))

Iva said…
oh my goodness, i am a huge pastry lover but i wouldnt wake up at 6 for it lol! my breakfast starts at 12pm :O

btw, dunedin is gorgeous mashallah. nz is definitely on my trip list :)
10:00 AM

Shahirah Elaiza said…
Iva: You're surrounded by the best bakeries in Melbourne, I envy you. The Friday Shop is like the only treat for us pastry lovers in Dunedin lol. You definitely have to come to the South Island! We have some gorgeous sceneries here =)
8:50 PM

muslim directory said…
Alhamdullilah... do they ship to the UK?
8:50 AM

Mihara said…
Dunedin Highgate Bridge a.k.a The Friday Shop here I come! Homemade Pastries are my favourite :-) Thank you for sharing :-)
1:26 AM