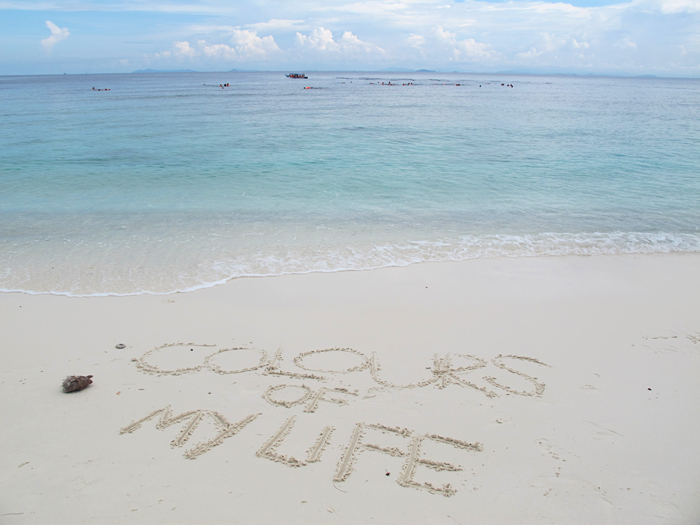 A promise is a promise: I said I would post more pictures of Lang Tengah island didn't I? 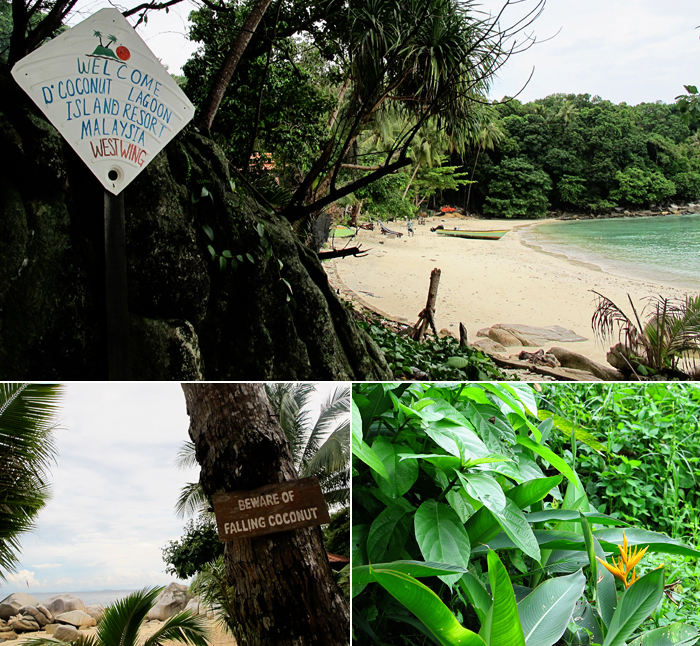 Rainforest rove: Lang Tengah is a very small island. So small that we were able to explore other parts of the island in less than 1 hour. If I'm not mistaken, we were told that it is only 5 km in parameter. 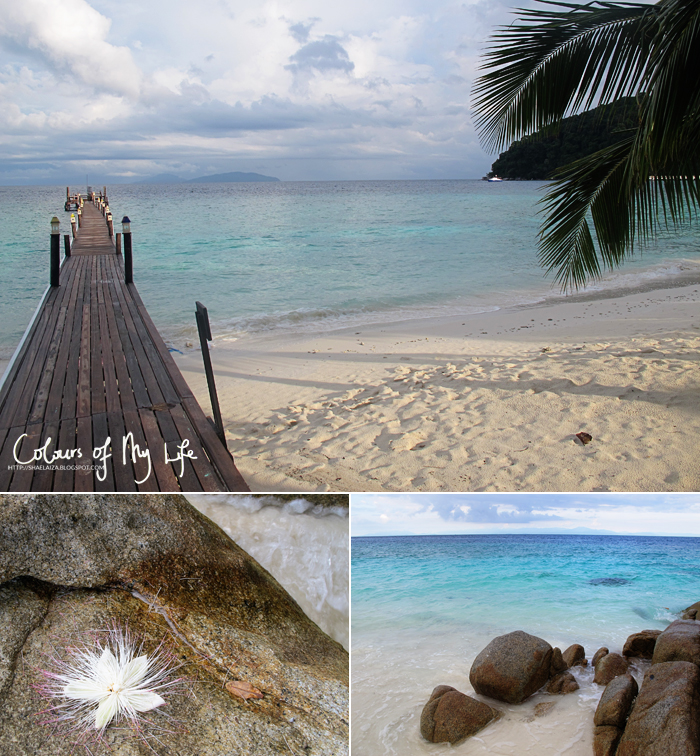 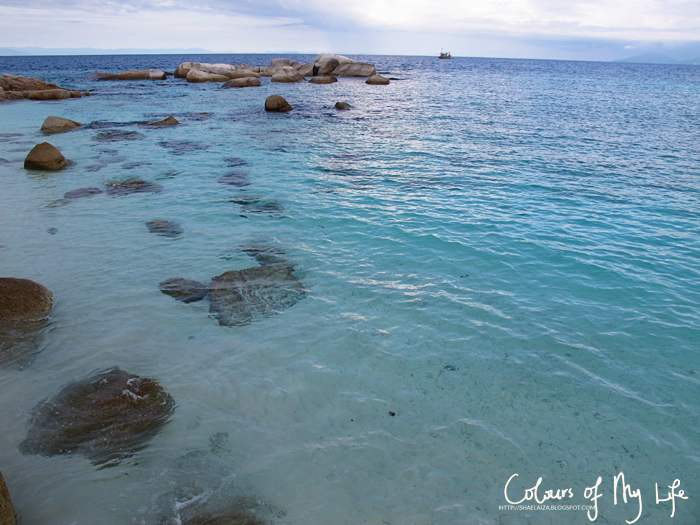 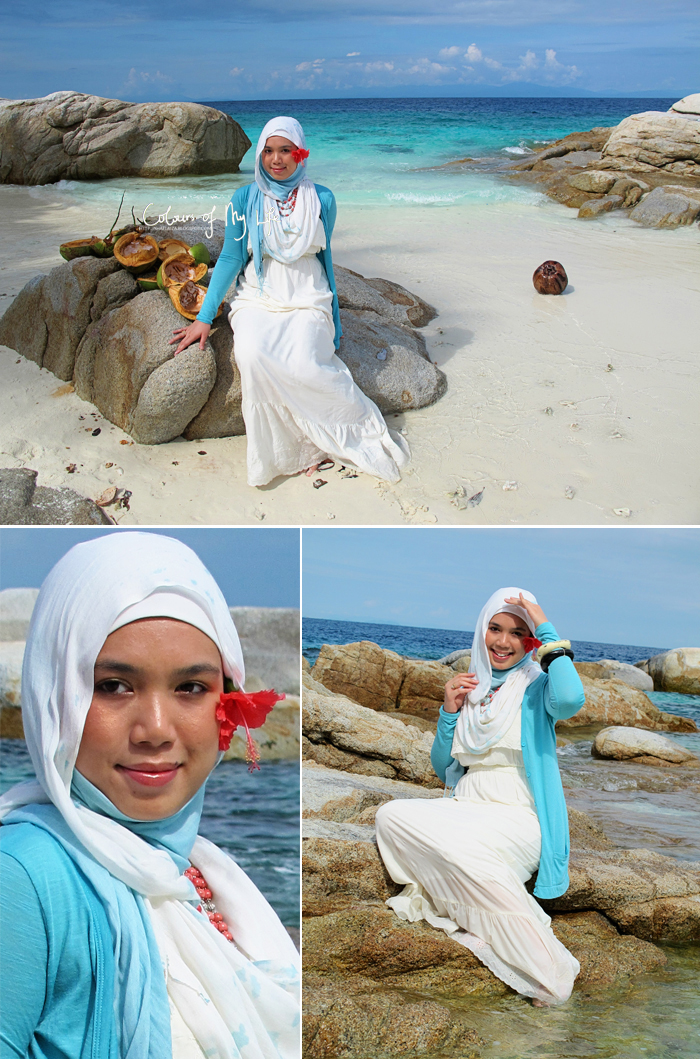 Under the sea, under the sea: When I was a little girl I wanted to be a mermaid and my late Dad used to take me swimming all the time because I loved it so much. By the way, the necklace I was wearing is made of marjan (Arabic for red coral). It was bought in Taif, Saudi Arabia 2 years ago. 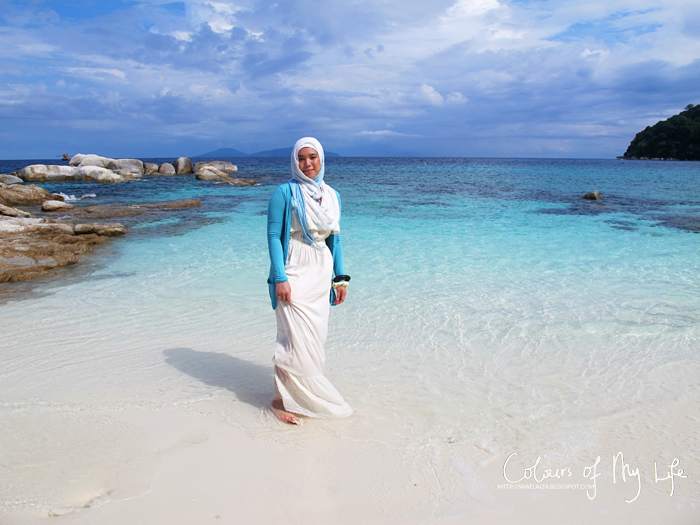 A holiday to remember: I will never forget this holiday. We had so much fun as a family, alhamdulillah, and that's rare because everyone's always so busy with work. It was also the first time I went snorkelling in my life. I've come to the conclusion that you haven't truly lived until you've been snorkelling. Well... says the mermaid wanna-be ;)

Oh yes! I even made a video of this trip. Initially I made it just for family and close friends but then I thought, "Pictures really don't do justice to this beautiful island!". I'd like to say a big thank you the staff of Sari Pacifica Lang Tengah for such an enjoyable stay and of course, thank you to my family for an unforgettable time.

SippingChai said…
This looks like an incredible trip MA! You look beautiful MA. You have just added another place to visit on my list. :)
3:25 AM

Magz and Mez said…
Wow. Just wonderful! I love the pictures in this post.
4:49 AM

ashieBee said…
beautiful!!!!! the water is oh-so-blue and tempting. rasa mcm nak jump in jeeee :D good that u had an enjoyable trip there *hugs*
11:41 AM

Shahirah Elaiza said…
Assalamualaykum all, glad you liked the post. May it inspire you to appreciate the wonders of Allah swt's creation =)
10:08 PM

anonymous said…
"colours of my life" suits your blog so perfectly as your life really is colorful masha'Allah! love your trip photos.. this place really looks like paradise on earth! BEAUTIFUL.

and ps- i always wanted to a mermaid too and you almost look like a mermaid in the last picture because of the way your skirt is angled. so pretty mA :)
11:13 PM

Shahirah Elaiza said…
@SARAH, with all honesty I don't think my life was this "colourful" until I started this blog. Perhaps that vision board stuff is partly true haha! My blog is kinda like my vision board.

Plus, ever since I started wearing hijab & becoming more of practicing Muslim, God has changed my life in ways I never expected. Alhamdulillah ala kulli hal. May Allah swt continue to beautify and place Nur in our lives =)) Ameen.
11:41 PM

Al fageerah said…
Masyaallah. The pictures had turned out really great. I wonder what kind of camera do u use sha? :-)

Thanks for the sharing. Jazakallahu kkayran jaza.
1:09 PM

Annisa Mulia Razali said…
I can't even close my mouth, so beautiful :-O
5:34 AM

Aisha said…
This place is breathtaking subhana'Allah! You're such a little jetsetter, getting to see all these amazing places, masha'Allah :)
11:32 AM

Izyan said…
What else can we do there other than snorkeling ya?
10:06 PM

Shahirah Elaiza said…
@Izyan, hmm I think jungle trekking and kayaking were some of the options. We snorkelled most of the time though. They can even take you on a personal snorkelling tour by taking you to different spots :)
2:34 AM

NydiaAnies said…
Lang Tengah sgt ohseemm! Been there bfore.. :)
8:35 AM