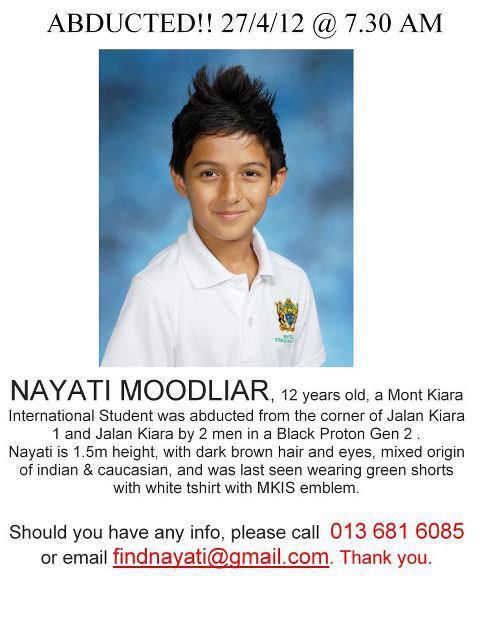 Last Friday, a 12 year old boy was kidnapped in Mont Kiara while he was on his way to school at 7.30 a.m.. Posters of his picture is now all Kuala Lumpur and the Internet - Facebook, Tumblr and Twitter - along with vague details of his kidnappers and contact details for those with any information about his whereabouts. Until today there are still no signs of Nayati Moodliar, the only son of two South African expatriates who currently live in Kuala Lumpur.

Nayati's abduction shocked everyone in Malaysia. Especially parents. But even those who aren't parents, like myself, are shaken by this tragedy too. Maybe it's the fact that he's an innocent child and that it could have happened to one of our family members. Maybe it's because it happened in our neighbourhood which we have always assumed to be relatively safe. Or maybe it's the fact that it happened all too suddenly. Just like that he was snatched away. No warning signs. Nothing.

It's scary but this is the reality of life. Most of the time bad things happen without any warning. We can never really be sure of what will happen next. We don't even know if we're going to be alive tomorrow. But nobody likes living consciously. We distract ourselves from this consciousness by drowning such thoughts with frivolous games and dreams. We live in denial, absorbed in a false reality. Then when true reality hits us right in the face we're gobsmacked. Perhaps we should face reality before it faces us.

To face reality is to accept a certain degree of power and powerlessness. To take precaution. To know that life as we know it can change in the split of a second and we won't even know when it will happen. Not knowing is our natural state as human beings and we don't like it because it makes us feel weak. Our ego hates this feeling so it constantly tells us to feed it with illusions of power.

My sincere, positive thoughts and prayers go out to Nayati and his family. I want to see them reunited as family. These prayers are the least I could do. The very least.

Magz and Mez said…
So sad to hear! Inshallah Kheir. Hopefully they find him safe and sound inshallah.

zt said…
The father of this boy, Mr Sham is actually a course trainer which course I just attended a few weeks ago.
So sad and shocked to hear this happened to his son.
Hope and prayers for the safe return of his son.
9:29 PM

Shahirah Elaiza said…
@Magz and Mez, inshaAllah, I really hope so too! And that his kidnappers will face justice one day.

So many bad people, bad people....may the parents found their son soon, may God protect him from harm....
11:09 PM

The posters of Nayati is everywhere. Alhamdulillah everyone is being so concern to help the parents in searching his only son.

Imagine the parents feelings. So many cases of children being abducted that I feel its not safe anymore to let your children go anywhere this days.

My sincere positive thoughts and prayers to Nayati and the family.
1:30 AM

susumanis said…
May Allah swt return him back safely to his parents,,aamiin...
9:31 AM

zt said…
Glad to hear the boy was released safely this morning :)
Hope that the authority can enforce and speed up other searches of many other missing child out there, regardless of status.
Lets make Malaysia a happy place to live :)
1:46 AM