I’m sure at some point in life your parents have warned you by saying, “Think twice before you act!” because they assume you’re about to do something stupid. 8 out of 10 times they were probably right. Hey, I’m equally guilty as charged. Or maybe it’s just me.
We are often reminded to be careful with our actions because they can negatively affect us and/or others. Nobody likes damage control but sometimes we forget that our actions also include the words we speak and write with. In fact, words can be as detrimental, if not more, than physical abuse. Bodily pain can go away but hurt in the heart can linger for quite a while because the emotional healing process usually lasts longer.
A few weeks ago a relatively famous Malaysian blogger decided to write a post to condemn one of Yuna’s African-inspired hijab style. The post generated hundreds of comments – most were in support of him. Yuna reacted by setting her Tumblr page to private. The girl was publicly humiliated; of course the first thing she wanted to do was to feel a sense of control as to what people say about her. It's hard being a celebrity because you become an easy target for criticism.
What shocked me while going through the comments was the kind of words some of them used to criticise her. The blog writer claimed he wrote the post with good intentions, God knows best, but my question is: If he never intended to cause Yuna any hurt then why didn’t he take some responsibility in moderating the comments? Or better still, why didn’t he just drop her an e-mail to voice out his concern? 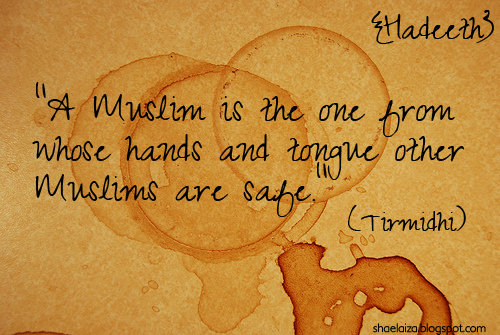 I don’t know about you guys but I respond to constructive criticism much better when I’m not being publicly humiliated. Thank you very much.
I’m not saying Yuna is the perfect role model who never makes mistakes. My point is, neither are you and I, and neither are those people who said nasty things about her just because of one hijab style. I don’t know what gives people the idea to think it’s ever okay to act holier than thou. It’s never okay. Never.
Shaytan has many tricks up his sleeve and provoking people to cause social disharmony is one of them. He causes arrogance to arise in us in order for us to feel that we are better than someone else but in truth, only Allah knows whose fate will be better in the Aakhirah. We see it happen all the time. People argue over something hurtful someone has said or done in the past.
Why do we succumb to Shaytan’s provocations easily? We, and myself including, should try to be more careful with feelings of anger and pride that can cause us to be complacent with our choice of words and actions. God did grant us free will, after all. That's the main reason why we're accountable for all that we do. Shaytan plays the role as the provoker while we carry out the deed.

Behold, two (guardian angels) appointed to learn (his doings) learn (and noted them), one sitting on the right and one on the left
Not a word does he utter but there is a sentinel by him, ready (to note it).

I think there are many ways for us to be more positive and courteous in our everyday speech but here's some I can think of from the top of my head:


Say ‘Assalamualaykum’ (peace and blessings be upon you) when greeting your Muslim friends. Think of it as the Islamic version of ‘I come in peace’. Besides, it’s sunnah and we really should bring sunnah back.

Don’t say something about someone else that you wouldn’t say to their face.

Say Bismillah (in the name of God) more often.

Resist the temptation to reply a mean comment with a nasty comeback. God has promised to reward you for your patience and whose promise can be truer than His?

Be kind when giving naseeha (advice). When someone does something sincerely for the sake of pleasing God they will do it in the most gentle and cautious way possible.

Choose your close friends. You can be civil and friendly with everyone but choose the people you keep close to you for they can influence you to become the kind of person they are without you even realising it.

Try to limit frivolous talk that doesn’t benefit anyone. There’s nothing wrong with small talk and playful banter to keep the conversation cheerful but if you find yourself talking about the latest piece of gossip all the time then you know what needs to be done.


Every word we say (and type and read by someone!) can’t be taken back. We will be accountable for every single thing we’ve said and yes, that’s a lot of words, but Islam is all about accountability. It’s only fair but Allah subhana wa taala is the All Merciful and Forgiving so seek forgiveness from Him sincerely and He will forgive you. If there's one thing I want people to know by reading this post it would be:  A good Muslim is a good human being.

And remember, a kind word or gesture goes a long way because it can even take you up to Jannah ;)
Email Post
Labels: faith friday

Chloe said…
Really well written Shah, and its so true. We often don't realise the full consequence of what we say. Thanks for writing this :)
1:45 AM

yatie chomeyl said…
a really nice post!. bravo! i like it and am inspired by the nice words. I'll try to be a better muslim and stop looking and others mistake and to start looking on my own deed.

They act is if they're uneducated and well, some of them are. It all begins from home. If you don't teach courtesy to your kids, they'll grow up thinking what they say is ok and this goes on til they're adults.

I'm sure people have OVER-reacted as always.

It just saddens me when people use crude language. Our prophet (pbuh) was the most gentle of all humans. When he criticised, he did so in a gracious manner. Very gentle and dignified.

I think its foul to speak in a horrible manner with the same mouth you use for praying and making doa.

Some people need a reality check.

It's NOT COOL or acceptable to HATE on people who do not act according to your religious (or anything else) preferences. Everyone's different and see things differently and that HAS to be respected.
5:56 AM

Maria Elena Zarul said…
sha, i love you so much!
your words and wisdom, is so clear! i definitely learnt something new. hehe! hope others will too! insyallah =D
7:19 AM

In generosity and helping others be like a river.
In compassion and grace be like sun.
In concealing others' faults be like night.
In anger and fury be like dead.
In modesty and humility be like earth.
In tolerance be like a sea.
Either exist as you are or be as you look
7:31 AM

A hadith I live by (well try to), and should be everyone's mantra is:

Laila said…
love the post! thankx for posting it, I'll try to do the last things you write on the post :D
Hugs!
6:37 AM

La Petite Cherie ♡ said…
Subhanallah, brilliant post Sha!! I would add, to avoid backbiting and talking negatively about them to another person :))
1:26 AM

Anonymous said…
I couldn't agree less shaelaiza! We should all strive to become better human beings. :-) Atleast i will. And i think your post is a great reminder. Greetings from Sweden/Asiya
3:00 PM