Faith Friday: Forgiveness - When It's Ok and When It Isn't

I used to think that I'm not as forgiving as I was in the past because when I look back I am surprised at the people I forgave and the kind of things I was willing to let slide. I don't have any regrets about them but when my mum once said to me, "Wow aren't you noble" I don't think she meant it as a compliment. However, I've just come to realise this. It's not that I'm not as forgiving today, rather, I have a different definition of forgiveness. I'm more cautious now because let's face it, once something is said or done there's no rewind and delete button at our convenience. No magic wand to make it all go away. Plus, some people like to take advantage of how forgiving you can be. They take you for granted.
While I believe it's harder to forgive certain people more than others and some things must not be forgotten I also believe I cannot change people nor the past. I can however have inner peace by letting go of grudges and accepting some people will always behave how they choose to behave. Yes, I say choose because their actions are their choice and my actions are mine. Forgiveness doesn't necessarily mean allowing things to be as they were because there's no such thing. Circumstances are always changing. If our experiences remain the same throughout our lives then what will we ever learn?
I've realised there any many ways to forgive but the best way I can think of so far is by accepting people and things are destined to be as they are today. There's only so much we have control over in this life but the rest really is just destiny. There is no point in being angry over something we can't control, is there? 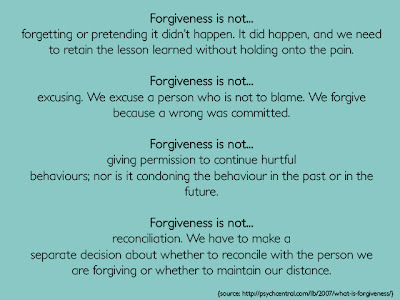 Forgiveness ultimately means letting go of resentment. On the other hand, reconciliation means establishing peace and rekindling good relations. I know people like to quote this beautiful hadeeth,

However, I don't think they always know what it means nor do they highlight the difference between divine mercy and human mercy because we cannot compare God's attributes with our attributes. I understand Islam teaches us that forgiveness is best teamed with reconciliation but I don't think it means allowing ourselves to be placed in the same vulnerable situation as before. If anything, forgiving others should affirm our faith in Allah subhana wa taala and strengthen our character and this includes being smart enough to protect ourselves from the harm others might cause. A good Muslim is not a push over but an intelligent, tactful person. A person who can decide on what is the best action for a given situation. When there's no harm posed we should make an effort to forgive and reconcile with those who have hurt us. 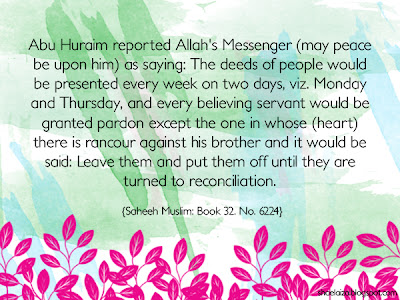 But when it comes to people who are plain toxic it is best to stay away from them. It doesn't mean you haven't forgiven them but it makes no sense to be close to people who hurt you again and again or once they show you their true colours. Forgiveness can mean a lot of things. It can mean choosing to walk away from a dispute. It can even mean giving someone a hug to assure them you've accepted their apology. Hence we can't and shouldn't define acts of forgiveness but the basis of any act of forgiveness is compassion and making peace with Allah's plan for us.
Email Post
Labels: faith friday

And I'm less forgiving now as well. But having said that, it's not that I won't forgive people, they just have to work harder at deserving my forgiveness. And then it takes LONGER time for me to let go but I do let go.

Because I don't want hatred to take me to the Hellfire. I also make sure I don't hurt people as well.

A lot of Muslims these days think its just between u and Allah but it's not true!

A Muslim has many responsibilities. Their conduct towards people around them is just as vital. Allah is oft-forgiving but humans aren't.
12:32 PM

Shahirah Elaiza said…
RS: Yup, I'm with you. It's not about being unforgiving. I think there comes a point when a person has to be more careful with the people they surround themselves with. One can still forgive, leave grudges behind and be friendly with everyone but it's also important to learn from what happened.

You're right, we should becareful with our behaviour and words because we never know if we have the chance to seek forgiveness from the people we have wronged.
12:13 AM