Ola everyone, sorry for not blogging for the past few days. I've been feeling under the weather lately  and I've been busy out and about. On top of that, recent happenings in Malaysia have dampened my mood. It all began when a group of Catholics in Malaysia began to claim the use of the name "Allah" to refer to God.  They even appealed in court to make it legal for them to do so. This caused an uproar by the Muslims in Malaysia as they feared the usage of "Allah" by Christians would confuse a lot of people, mainly the impressionable Muslim youth, as publications of the Christian Bible and other Christians books have been translated into the Malay language.
I know Arab Christians have referred to God as Allah because let's face it, Al-Ilah a.k.a. Allah literally means The God. And now a group of Christians want to use it here as well but the problem is... it's not our culture.  The Arabs use it because they speak Arabic but it's not necessary for Christians in Malaysia to start calling God as Allah. Why adopt something that's just going to make things complicated in our country? When you live in a multicultural society where different religions are practiced, matters like this tend to become a very touchy issue.
As a result of the tug of war between the Christians and Muslims, some Muslims have resulted to violence and vandalism. A church was burnt and 6 others were vandalised. Thankfully no one was physically hurt. However, this is what happens when people don't want to set their egos aside and just discuss the issue. People can say that they're intellectually incapable or they're just emotional but at the end of the day a lot of innocent people have to pay the price for the actions of a bunch of irresponsible, narrow-minded so-called Muslims. Now, the Christians and other non-Muslims are in fear and many Muslims are very shocked and ashamed by the behaviour of the aforementioned Muslims.
I don't know who they are but they certainly had an agenda and I strongly detest the means they have used in trying to achieve it. Violence is not the answer. Politics certainly plays an important role in any country and there has been political instability in Malaysia for the past few years. This country is in the midst of a campaign called '1 Malaysia' in effort to celebrate and encourage affinity between the various existing ethnicities and cultures. When something like this happens clearly somebody out there is trying to stir up trouble. Bravo! They've done exactly that because people's reactions have been full of negativity and hopelessness. Statements like "How can 1 Malaysia exist now?", "I can't wait to leave this country" and "I'm ashamed to be Malay" don't help and this is certainly not the time to be throwing racist remarks. If you're not part of the solution you're just part of the problem. People lose faith so easily and I can't help but wonder why because truthfully I think '1 Malaysia' has always existed.... way before the ideology and campaign even began. It's just another PR and marketing strategy.
We're not going downhill. We just need a boost after all this mess. It's not impossible because I know there are Malaysians out there who love their country and their fellow citizens. Dear Malaysians, all I want to say is... have faith in others and most of all, in yourself. You can be the change that you want to see in others (Gandhi, he was pretty wise wasn't he?). Learn from the mistakes of others instead of falling right into the trap of becoming just like them. The past leaders of this country didn't sacrifice and struggle to end almost 500 years of colonialism for nothing. They didn't defend our rights only for us to take them forgranted later on.  History has proven that they have achieved independence and social and economic progress for you, not just for the Malays but for everyone who wants to be a part of Malaysia no matter what race, ethnicity or country you belong to.
We are lucky to be Malaysians and to live in a country that has been blessed with peace, considerable wealth and harmony. If you compare Malaysia's situation to other countries that are facing wars and heart-wrenching social problems you will start to appreciate what we have here. We've enjoyed too much for far too long that when things get a little tough we lose hope and start losing our positivity. Amidst all the craziness it's really important to reunite, move forward, find something positive in each other and pay it forward. Grab this opportunity to start something good. Fear only breeds more fear... is that what we want to teach our children? 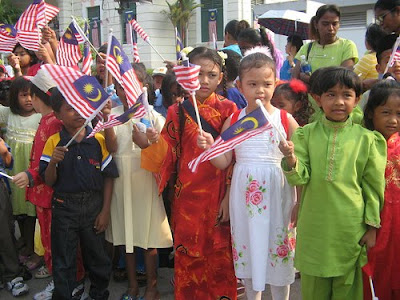 hispanic muslimah said…
When I was Catholic my friend, a young man of Maronite Arab-Lebanese orgin, explained the use of Allah by Christians. He went to Catholic church with me and told me that Arab Christians use Allah to refer to God as well because as you mentioned, Allah only means the one God in Arabic.
I personally don't see the problem with Christians or even Arab jews using the word Allah for God...I think it demonstrates unity. Of course, Christians don't have the same exact concept of God as Muslims do, and that is where there can be conflict. In my everyday language I use the word God because it's what I've been accustomed to. I try to use the Allah for the word God as much as I can because I'm a Muslim now. But when it comes down to how I think in my head...it's God...the one true God..and I believe there are many words to describe God, including the 99 names we've been given. Those names have a deeper meaning and those are names I would reflect on greatly rather than the Arabic word for one God.
I understand your point, why are the Malaysian Christians using the Arabic word, Allah, if Arabic isn't their language?
Other churches don't go out of their way to adopt the Arabic word for God unless they have an Arabic speaking congregation.
Seems to me they were just trying to start something.
2:01 PM

The contention comes from the issue of conversion, passing out bibles and publications from Christian organizations using Allah in a Muslim majority country with a possible attempt at using that word to convert people to Christianity when possibly they were interested in Islam..

Something of that nature. I personally think it is an empty argument and ridiculous to take up physical transgressions over..
6:00 PM

I love your optimism, and I think you are absolutely right. Your post is the best I have read so far concerning this issue, and I wish every Malaysian and person interested in the topic could read it.

Maryam said…
I was just reading about this issue and it's good to hear your opinion on this.

and I agree with Sarah Elizabeth; your writing exudes a leadership personality. Great!
11:47 PM

Shahirah Elaiza said…
It seems that they're not just using 'Allah' but other words that are exclusively used by Muslims. I saw it on a newspaper just now but I don't recall exactly so I won't say it, just to avoid allegations of me creating slander. The whole row is about the intention of this group of Christians because the 2 religions are similar, it seems like they are trying to mislead Muslims or people who are thinking of reverting to Islam.

Hispanic Muslimah: My point exactly, you refer to God in a way that you feel is most meaningful. That's how it should be.

Sarah & Maryam: I'm so surprised by your comments cos I have to admit, I wrote it while I wasn't well... and I felt that my writing wasn't very coherent but I just published it anyway cos I felt some things needed to be said. Thank you, it means a lot to me!
12:20 PM