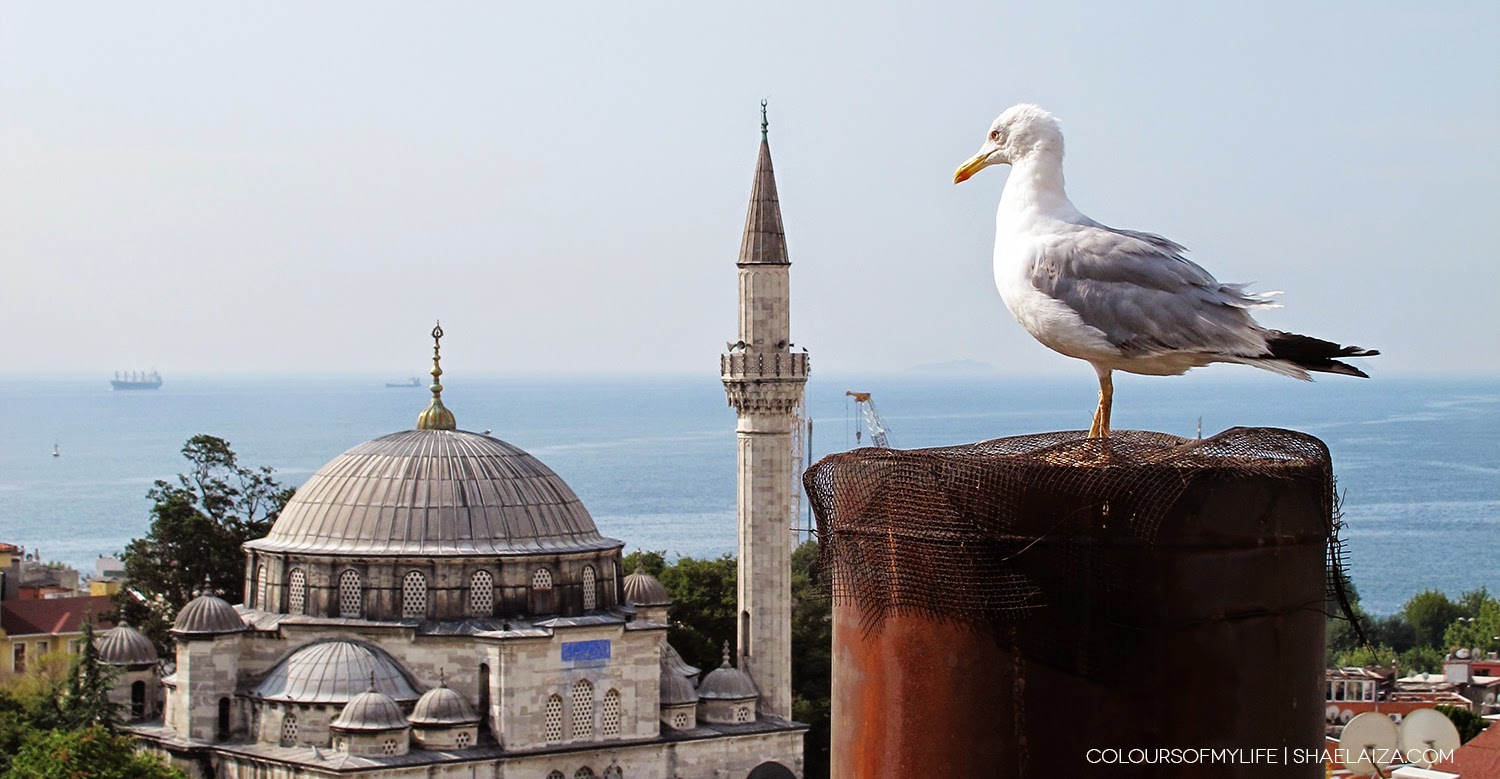 Like my late father used to do, I would encourage anyone to travel. To see a different perspective. To experience other cultures as they could make you a better person while teaching you to appreciate the culture you grew up in. To humble yourself. Our 11-day trip to Turkey in August was not without drama but it was no doubt one of the most memorable holidays we have ever been on. It's safe to say I'm very much in love with Turkish food, architecture, Islamic heritage, culture and landscape. I love the fact that  traditional mosques are scattered everywhere around Istanbul. Some were obvious, others inconspicuous.

Can I be honest? I have dreamt of visiting Hadramaut far more than I have of any city in Turkey. Why Hadramaut? I'm on a spiritual quest. I'm always on a spiritual quest and I believe people who lead simpler lives have better character. I want to learn from them and I need to restore my faith in the Muslim community. But God is the Best of Planners. Turkey is where He led me in the end and I couldn't be more thankful. Alhamdulillah.

We arrived Istanbul on the evening of the 3rd of August. It was the middle of summer and the air was warm and dry. Atatürk International Airport was crowded with tourists from all over the world but I was relieved. Before our flight to Doha and Istanbul I was a bit apprehensive about the trip because of the MH370 and MH17 tragedies. But I love travelling and decided that if anything bad were to happen while I was doing what I love (in a state of iman, of course) then so be it.

The view of Marmara Sea from the rooftop terrace of our hotel.

After a 15 - 20 minute taxi ride from the airport we settled in at our first destination:  Sultanahmet. The taxi ride costed us 50 Lira (RM 100), an extra 10 Lira, because we had a lot of luggage. By the way, there is a cheap airport shuttle service that's really convenient for tourists but it doesn't go to Sultanahmet. (Find out more about transportation in Istanbul here).

Anyone who plans to visit Istanbul can expect to spend a large portion of their time in this charming and historical district because most major tourist attractions are located in and around this area, such as Sultanahmet Mosque (a.k.a. the Blue Mosque), Hagia Sofia, Basilica Cistern, Topkapi Palace, Suleymaniye Mosque and several museums. Due to its popularity, it is also quite possibly the most expensive district for tourists to stay at. In comparison to Beyoğlu, where we spent the last 5 nights in Turkey, food and accommodation are dearer in Sultanahmet.

We opted for a cosy little place called Sultanahmet Suite Life Hotel. Having said that, the price we paid would be equivalent to a 4 - 5 star hotel room in Kuala Lumpur. The room was small but it was clean, decent and only 3 - 5 minutes away from the Blue Mosque and the Hippodrome (Sultanahmet Square).  The friendly hotel staff, Turan, helped us with our luggage and then invited us for complimentary coffee on the hotel's rooftop terrace. After the long journey you can imagine how hungry we were and we couldn't wait to try the local Turkish cuisine. Turan pulled out a map, recommended a kebab restaurant and showed us directions to the main attractions. 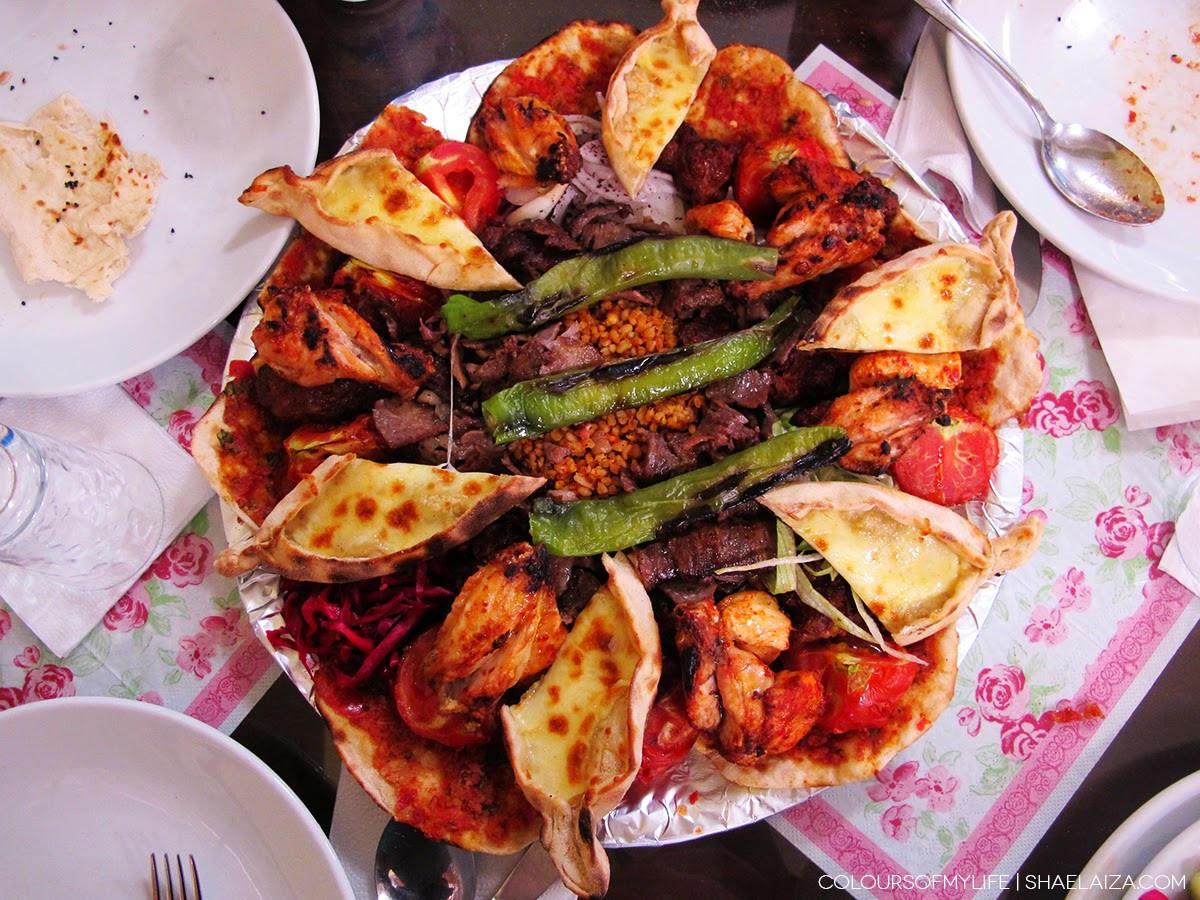 Our first meal in Istanbul was a delicious mixed grilled platter served with bulgur wheat pilaf. It was large enough for 6 - 8 people. I have eaten Turkish food in New Zealand but it was no where compared to the food I had in Turkey. Although, I wasn't particularly a big fan of the ayran (a salty yoghurt drink) as a beverage. 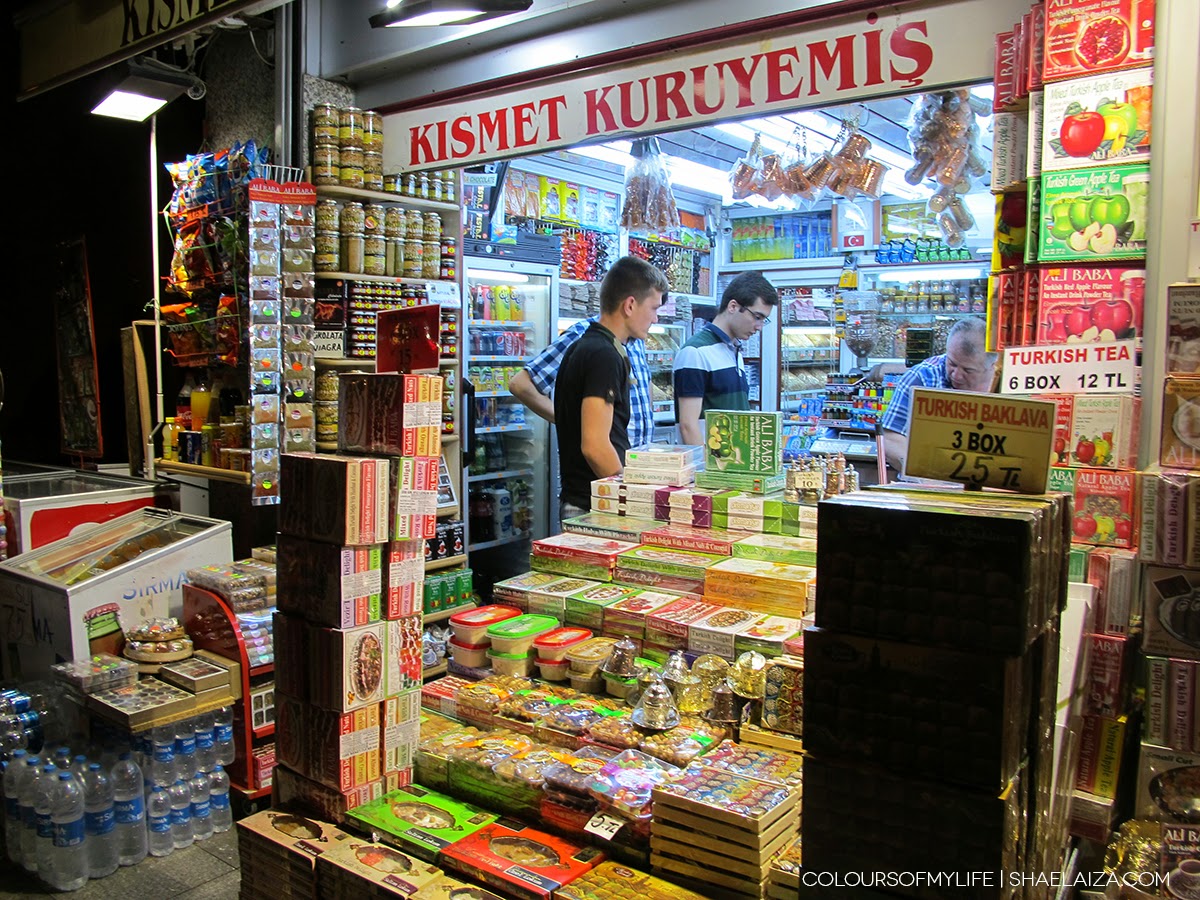 After dinner we went on a stroll to Sultanahmet Square and had a quick glance at the Blue Mosque and its surroundings. We were tired so we decided to properly visit the mosque the next morning. The ambience is a lot calmer at the mosque during night time; ideal for prayer and reflection. Looking back, I wish I had spent more time in this mosque at night time. 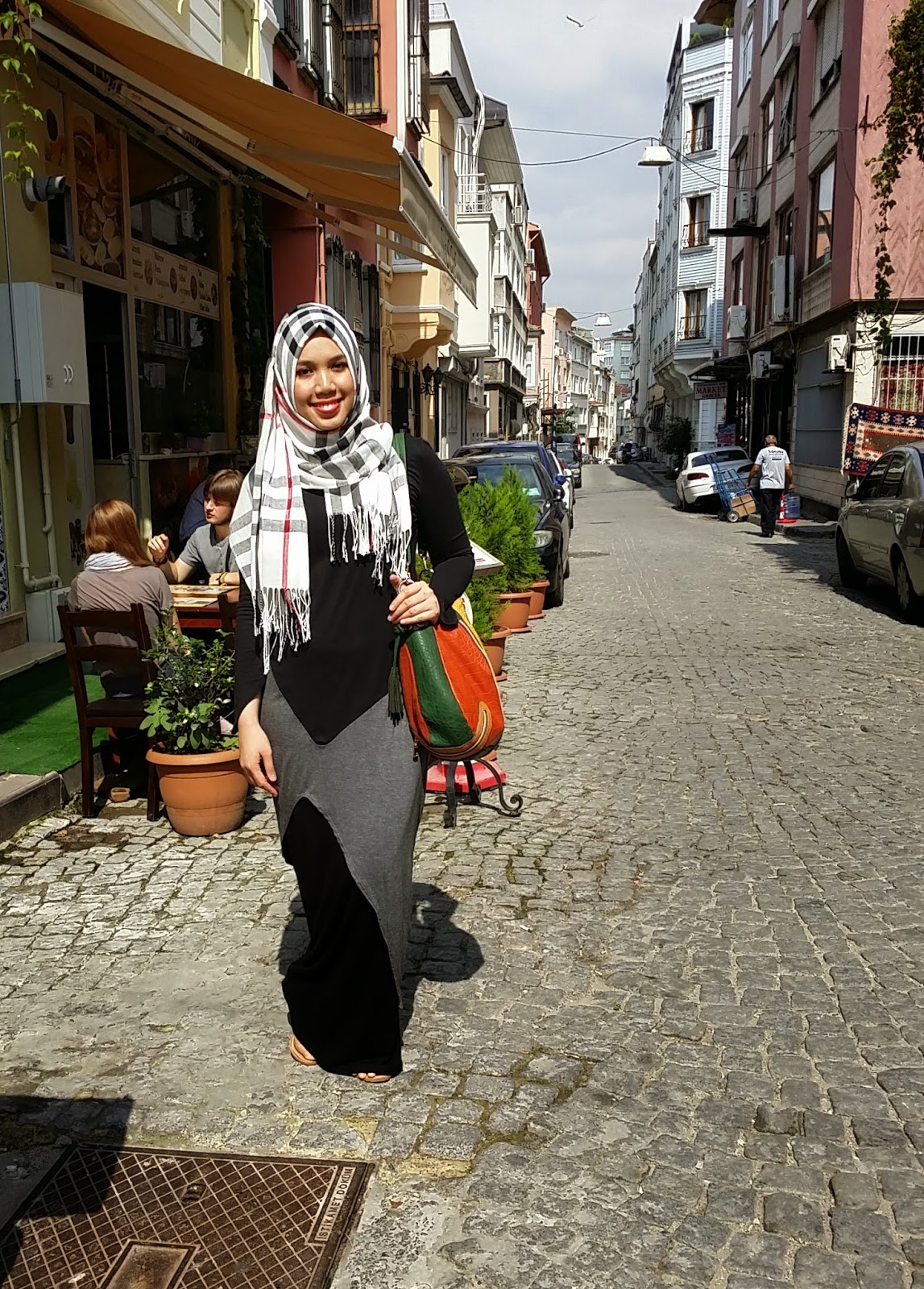 I was loving the narrow cobblestone lanes of Sultanahmet and looking forward to a great day of sightseeing. 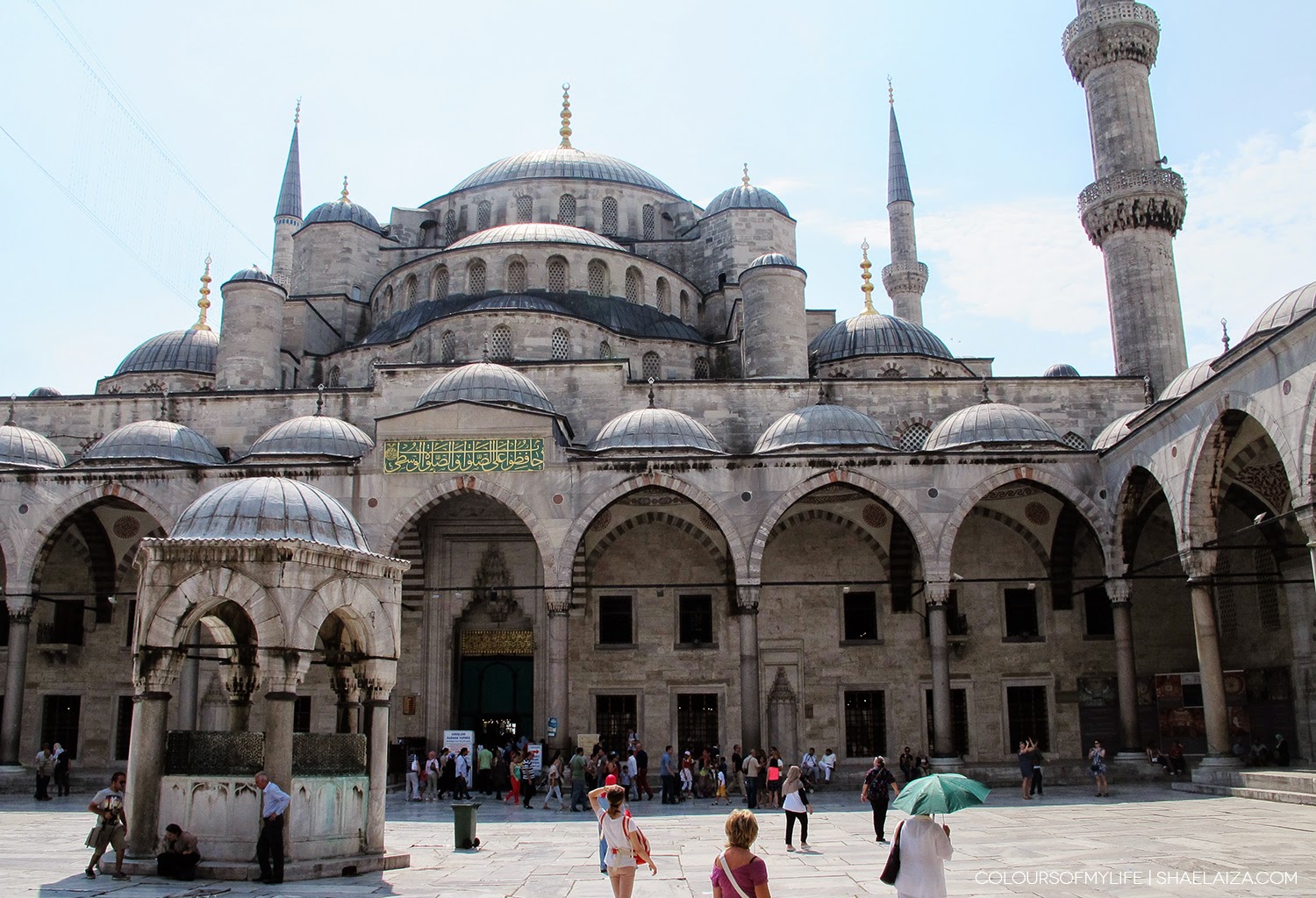 The grand and awe-inspiring Sultanahmet Mosque (Sultan Ahmet Camii) was built between 1609-1616 and it is popularly known as the Blue Mosque because of the hand-painted blue tiles that gloriously decorate the interior of the mosque. 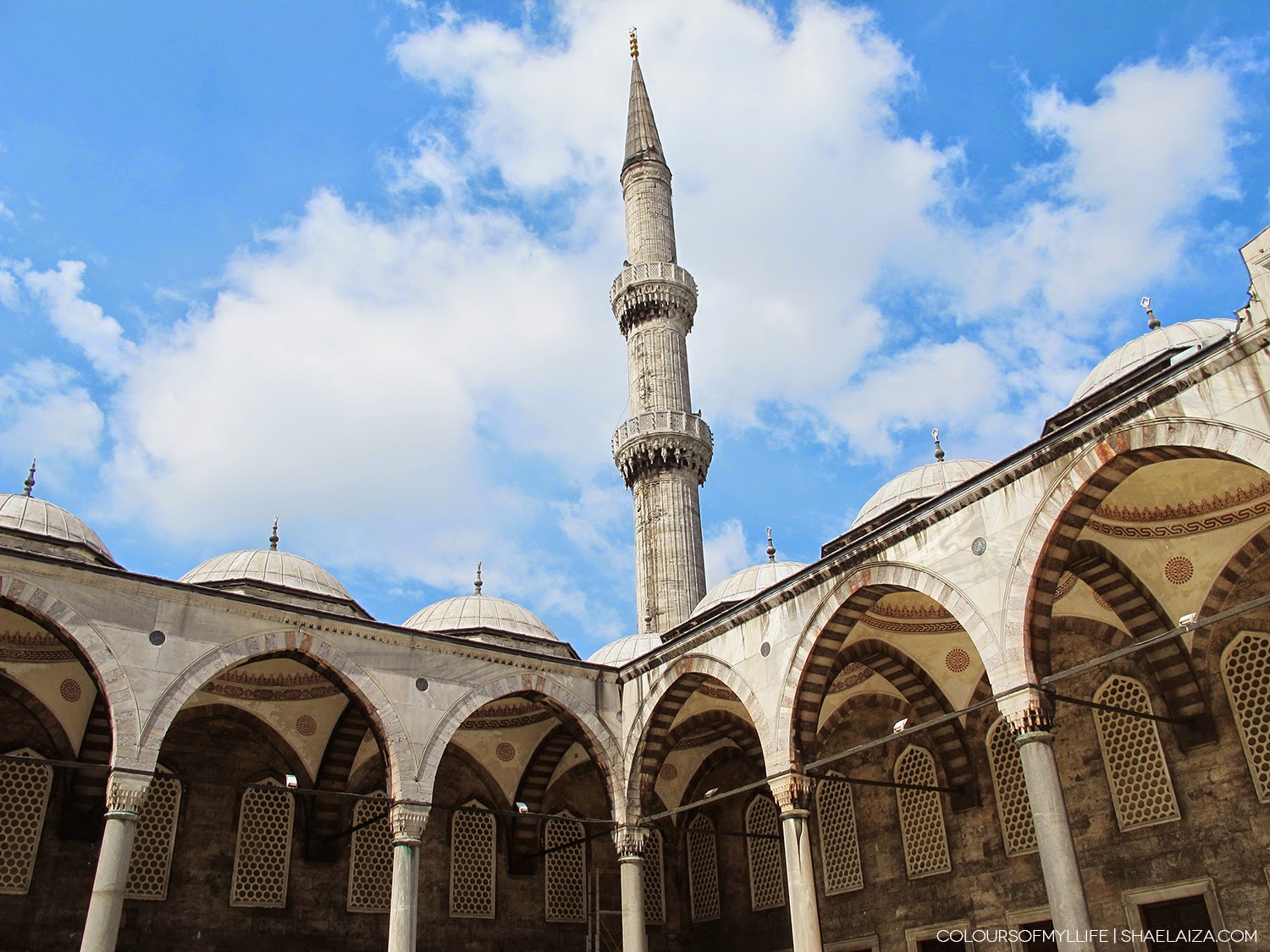 The mosque has 6 minarets but it is said to be the outcome of a mistake made by the architect, Mehmet Aga, who misinterpreted the Sultan who ordered him to build a gold ('altin' in Turkish) minaret for his mosque. However, he instead constructed a mosque with 6 ('alti' in Turkish) minarets. Aga feared the sultan would be upset but he was actually pleased. 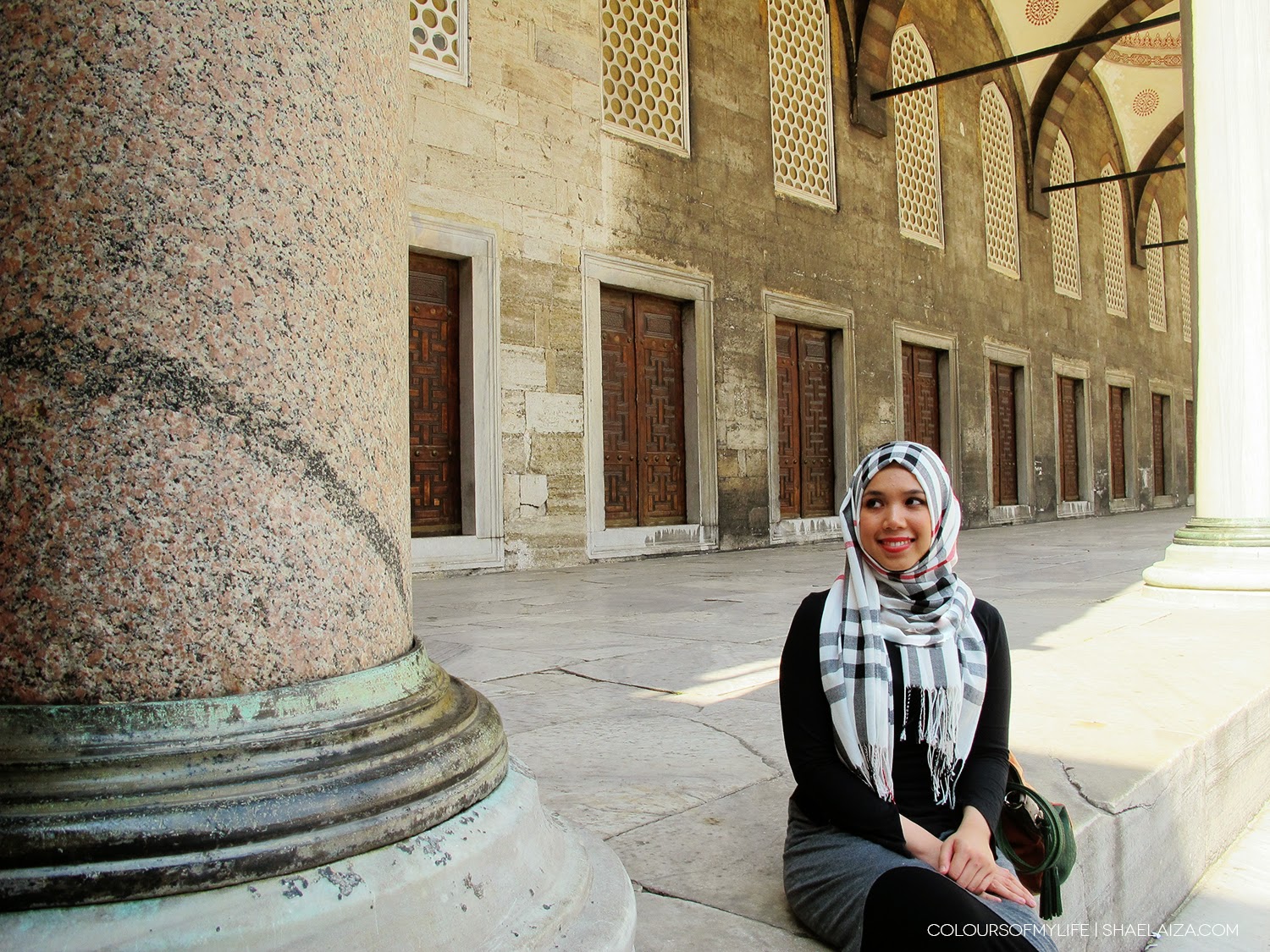 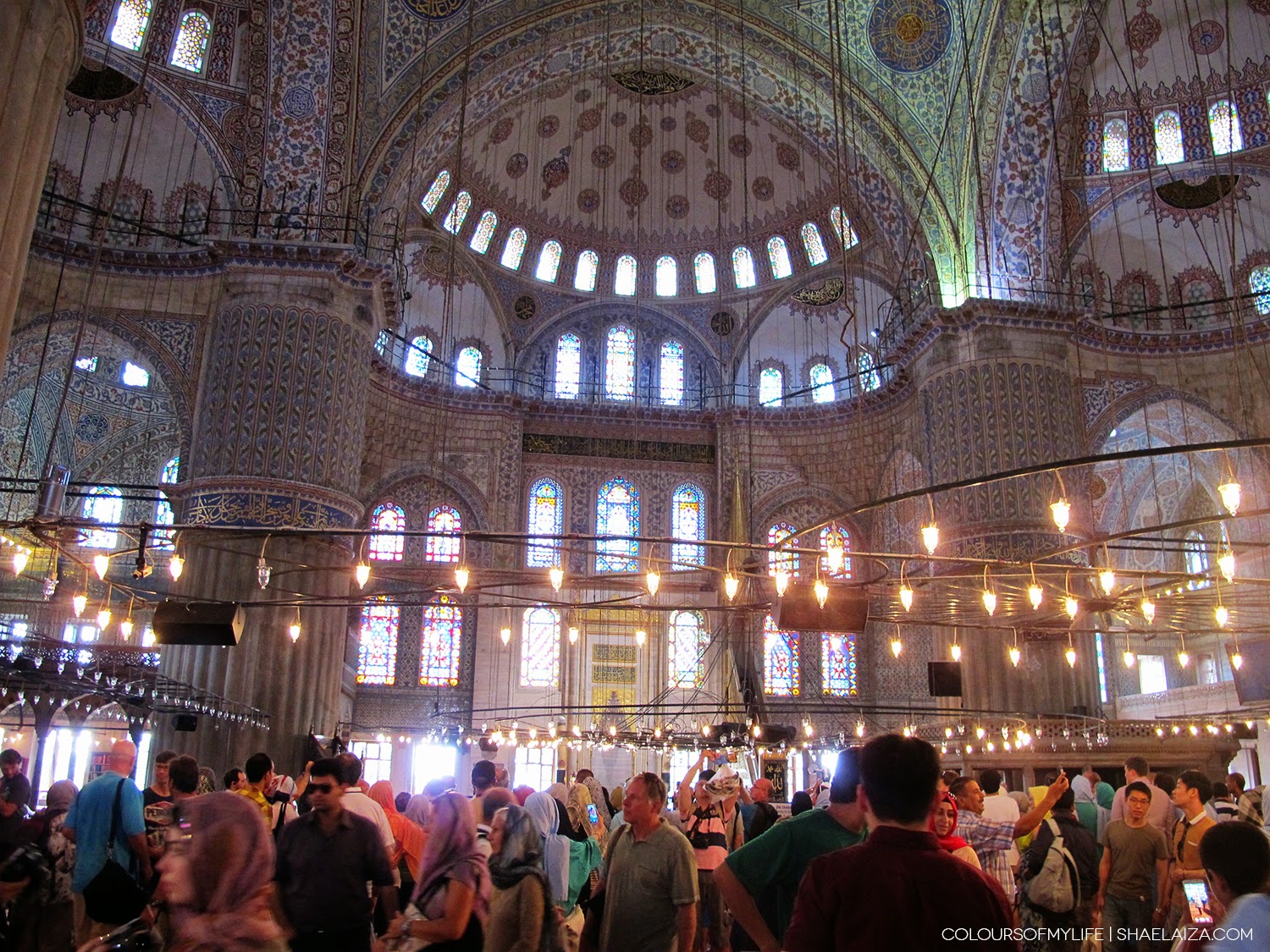 An influx of tourists visit the Blue Mosque everyday to marvel at the beauty of this historical architecture. Non-Muslim tourists are welcomed into the mosque but they are not allowed inside the large prayer area to avoid disturbing those who are performing their prayers. I have never seen so many non-Muslims show interest in a mosque but as I once read on Humans of New York: "Isn't everything beautiful advertising something?".

"God is beautiful and He loves beauty." — a saying of Prophet Muhammad (peace be upon him) 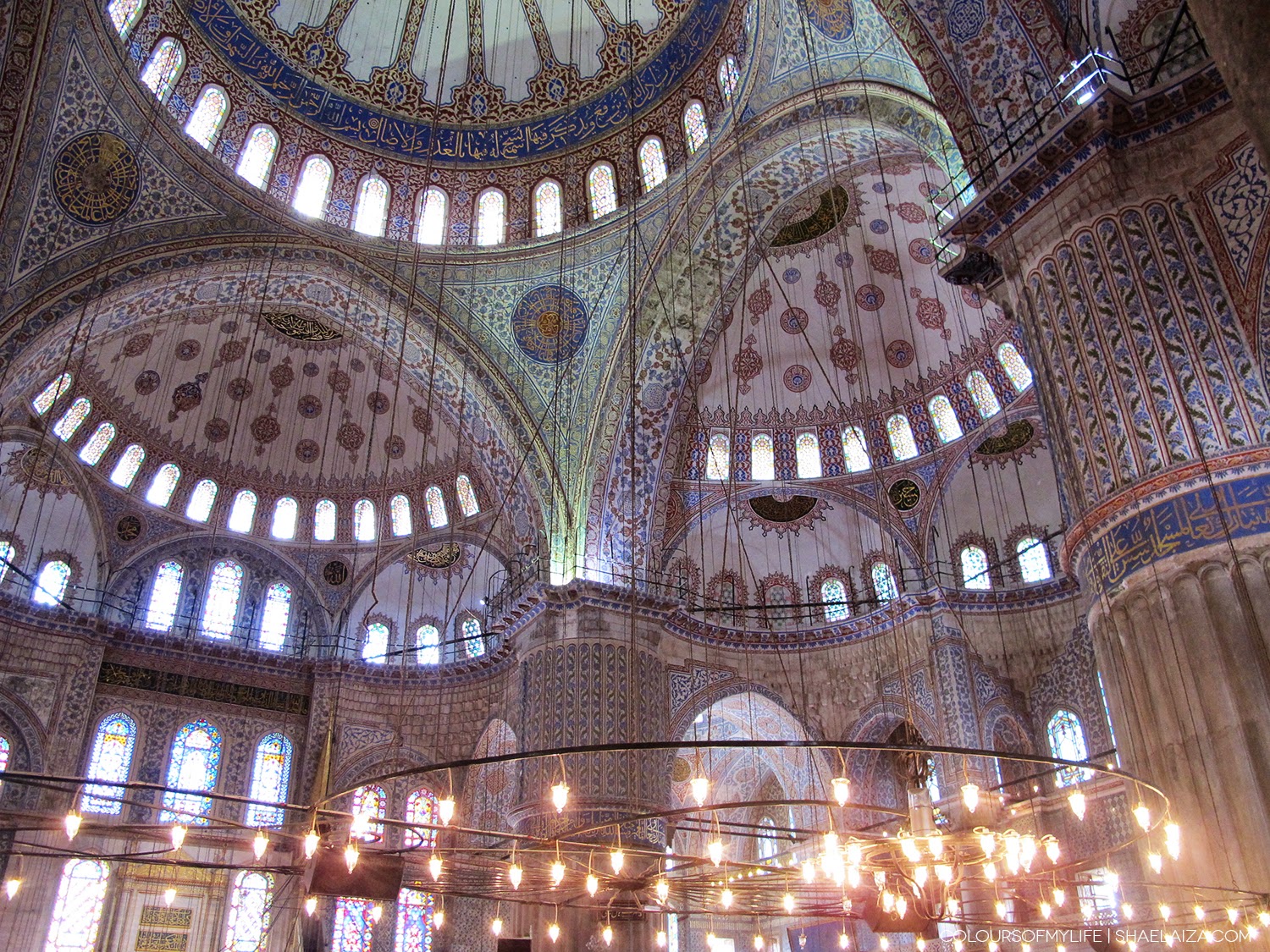 I felt like I was dreaming. I couldn't believe I was standing in one of the most stunning mosques in the world and that I was in Turkey, a country with a very rich Islamic history that goes back to the 14th century. 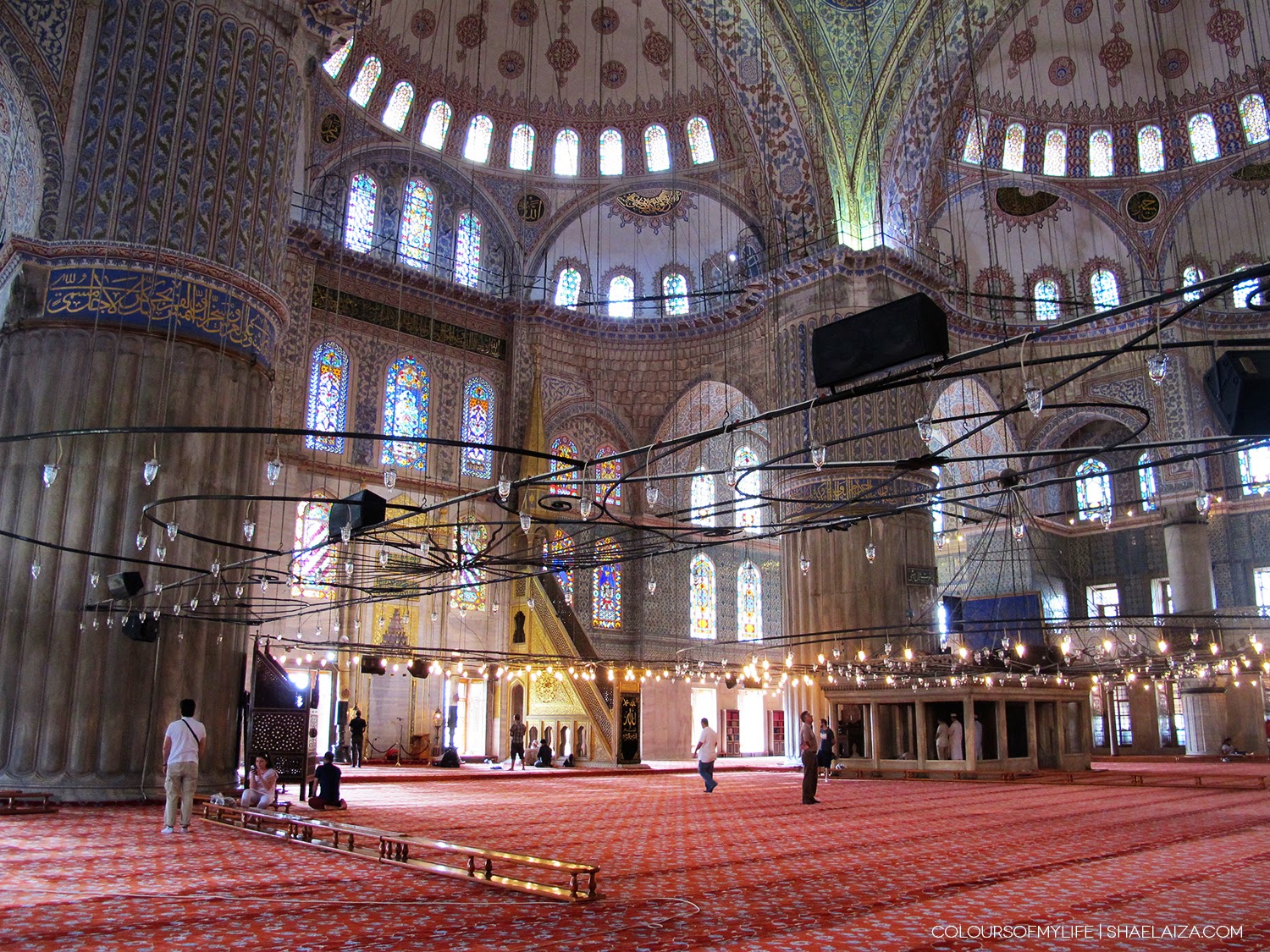 Following our visit to the Blue Mosque, we joined a tour group that took us around Sultanahmet. During our initial stay in Istanbul that lasted for 3 days, we went on 2 tours with a travel company called "She Tours" as recommended by Mehmet, the manager of Sultanahmet Suite Life. It's helpful of them to help arrange the tours for us but we also knew they would get some commission for doing so.

In this post, I'll focus on the the half-day Ottoman Relics tour which consisted of Little Hagia Sofia (as the Hagia Sofia is closed on Tuesdays) and Topkapi Palace. Although we have no regrets, we wouldn't recommend "She Tours" because they were overpriced. We shouldn't be too money-conscious during a holiday but the tourist guides we had were not very knowledgeable and the tours were also quite rushed, although I understand there is a time constraint.

Our first stop was Little Hagia Sofia mosque. It was formerly a church and contrary to its name,  it's not a smaller version of the Hagia Sofia. However, it was designed by the same architects who wanted to "practice" their skills before building the largest church of the Byzantine Empire - the Hagia Sofia - between 532 - 537 AD. 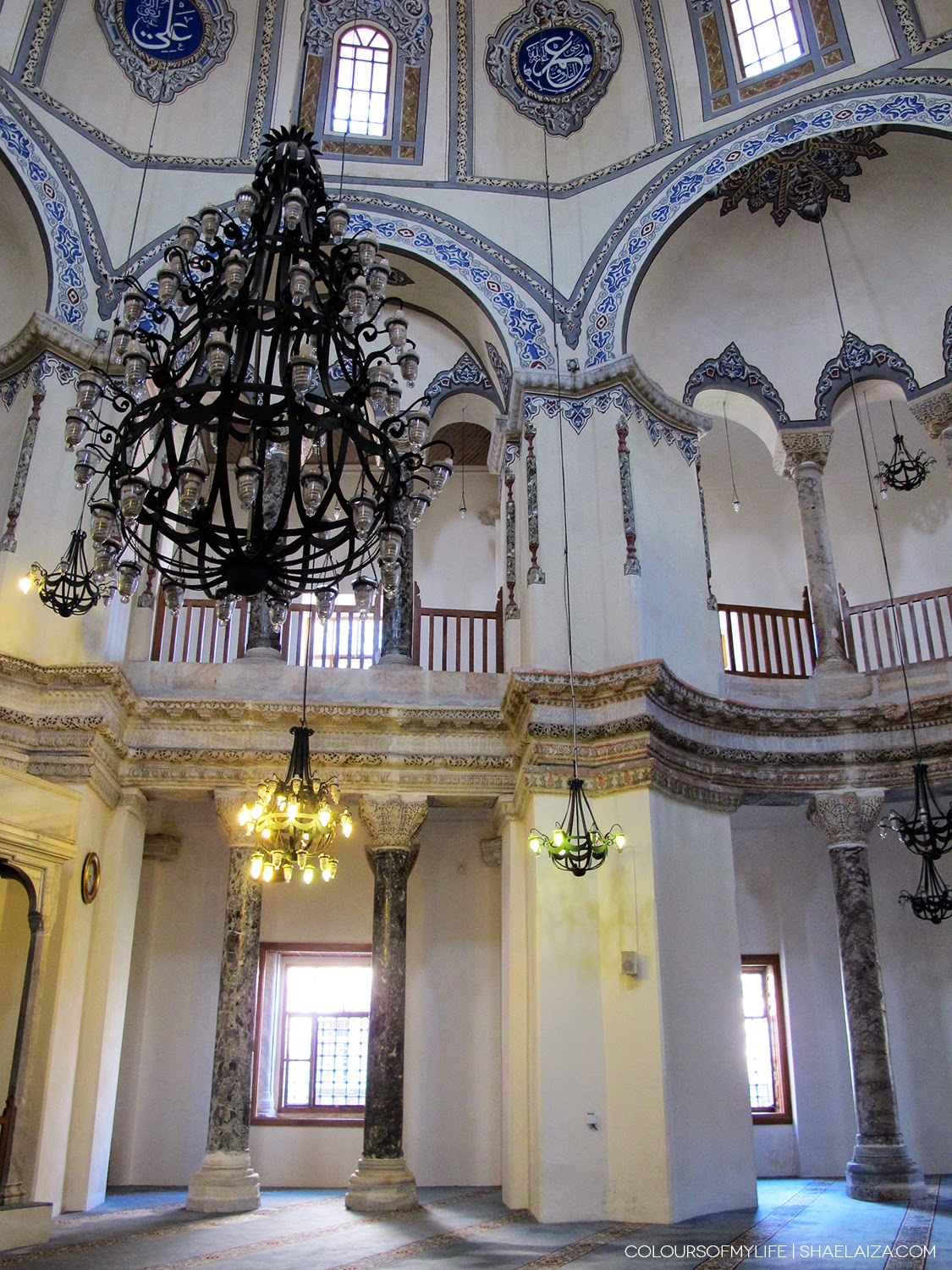 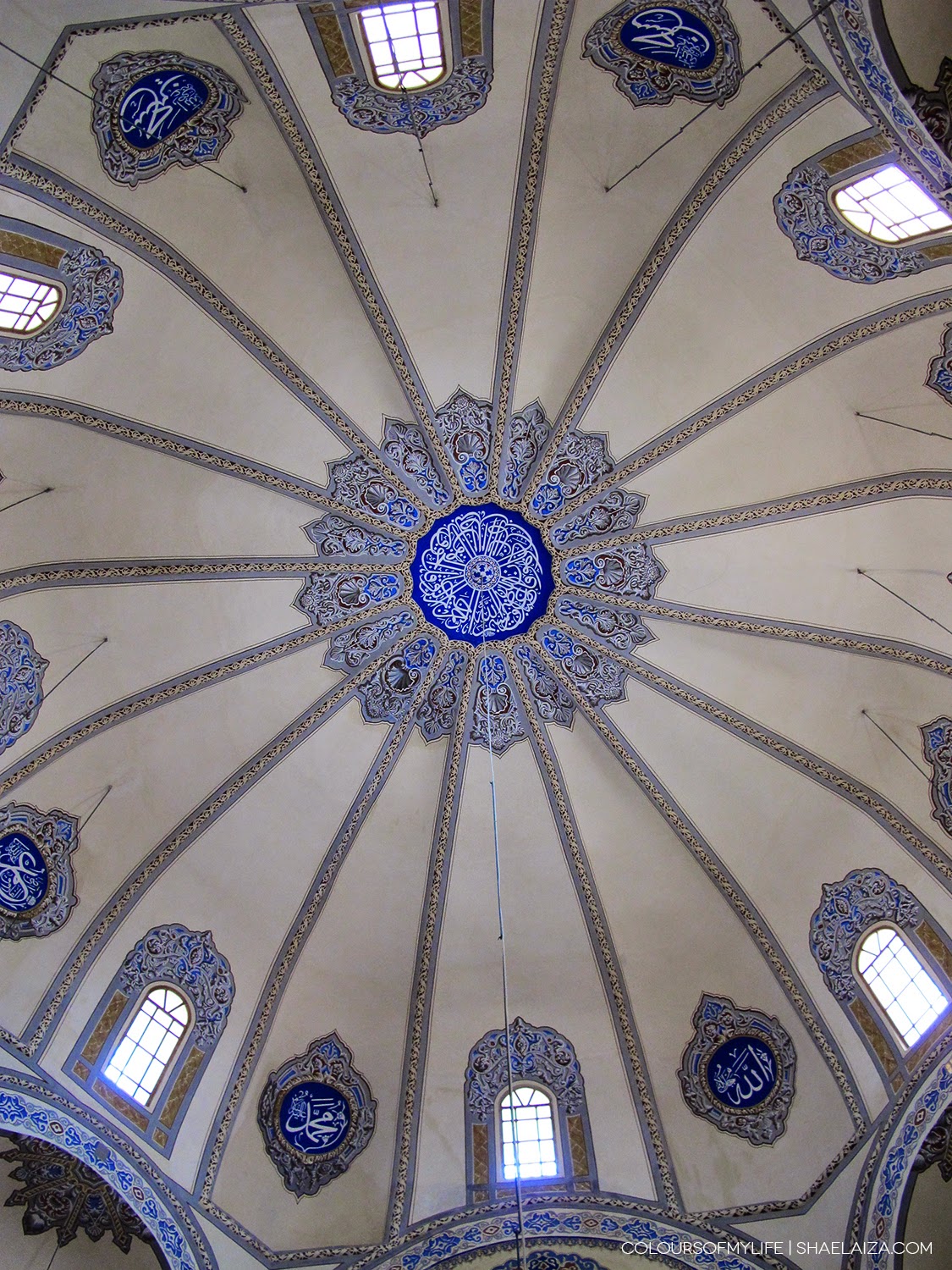 Then we were quickly rushed over to Topkapi Palace where the Ottoman sultans resided for 400 years of their 624-year reign. The large complex consists of 4 courtyards and several small buildings. I enjoyed walking through the compound and looking at the exhibition of items that once belonged to Prophet Muhammad (peace be upon him), Prophet Ibrahim, Prophet Yusuf, Prophet Yahya, Prophet Musa, Prophet Daud and the grandchildren of Prophet Muhammad (peace be upon all of them) inside an area called the Chamber of the Holy Mantle.

The Ottoman sultans were able to have these Islamic sacred relics in their possession because they were entrusted with these precious items as the caliphate had been passed to them after the conquest of the Arab world. 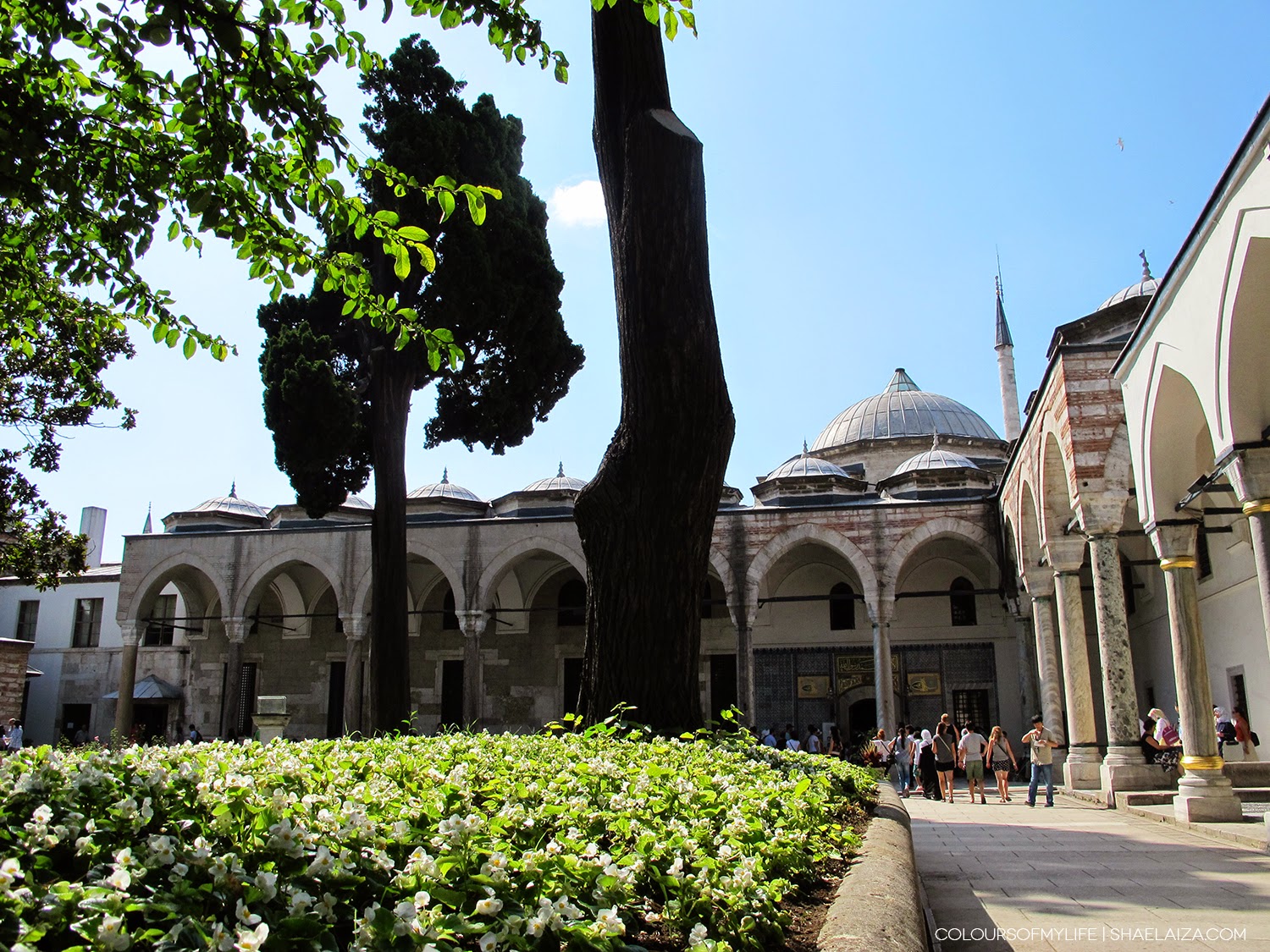 Flowers and trees covered the grounds of Topkapi Palace. 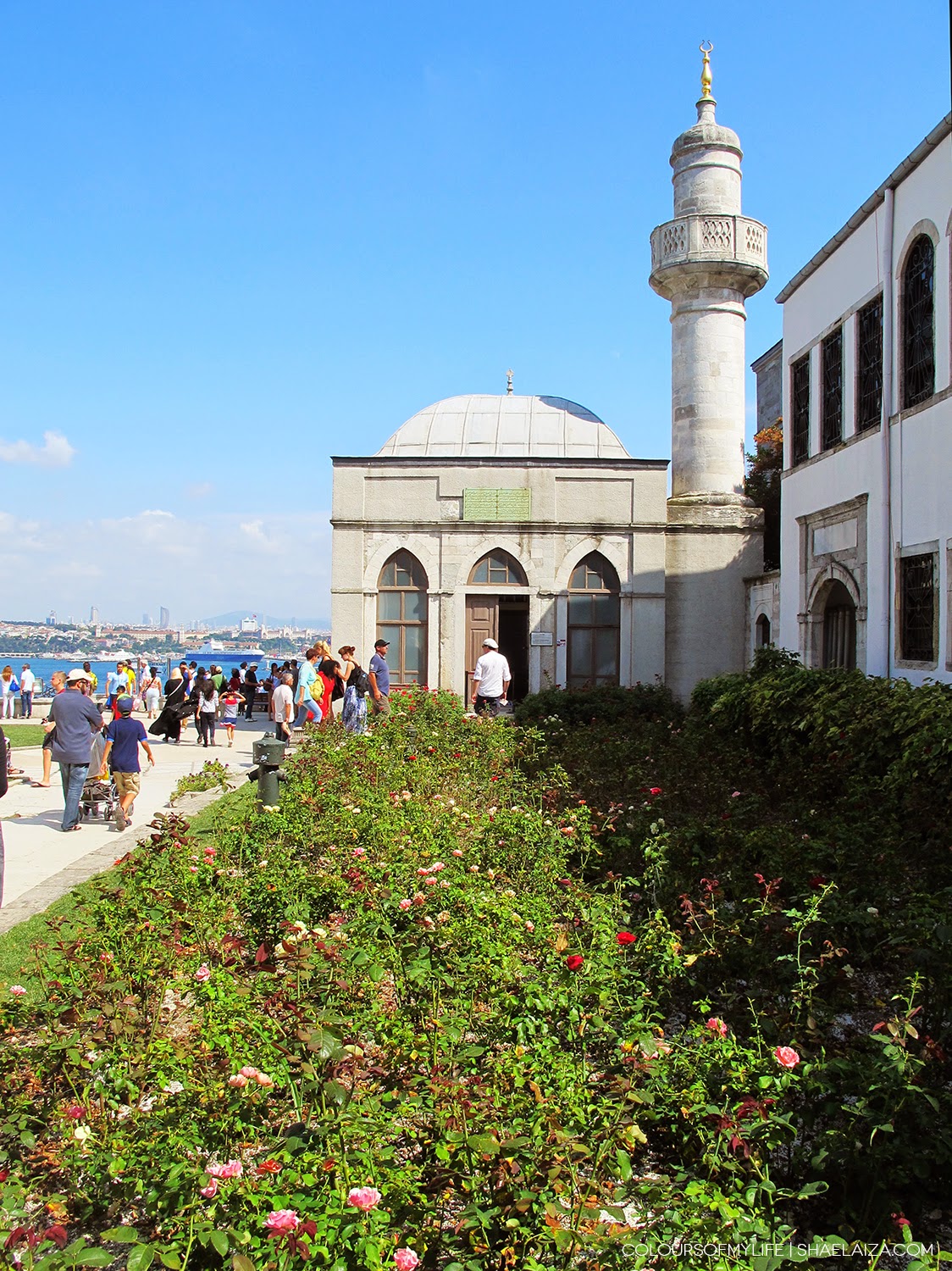 The rose garden behind Topkapi Palace. 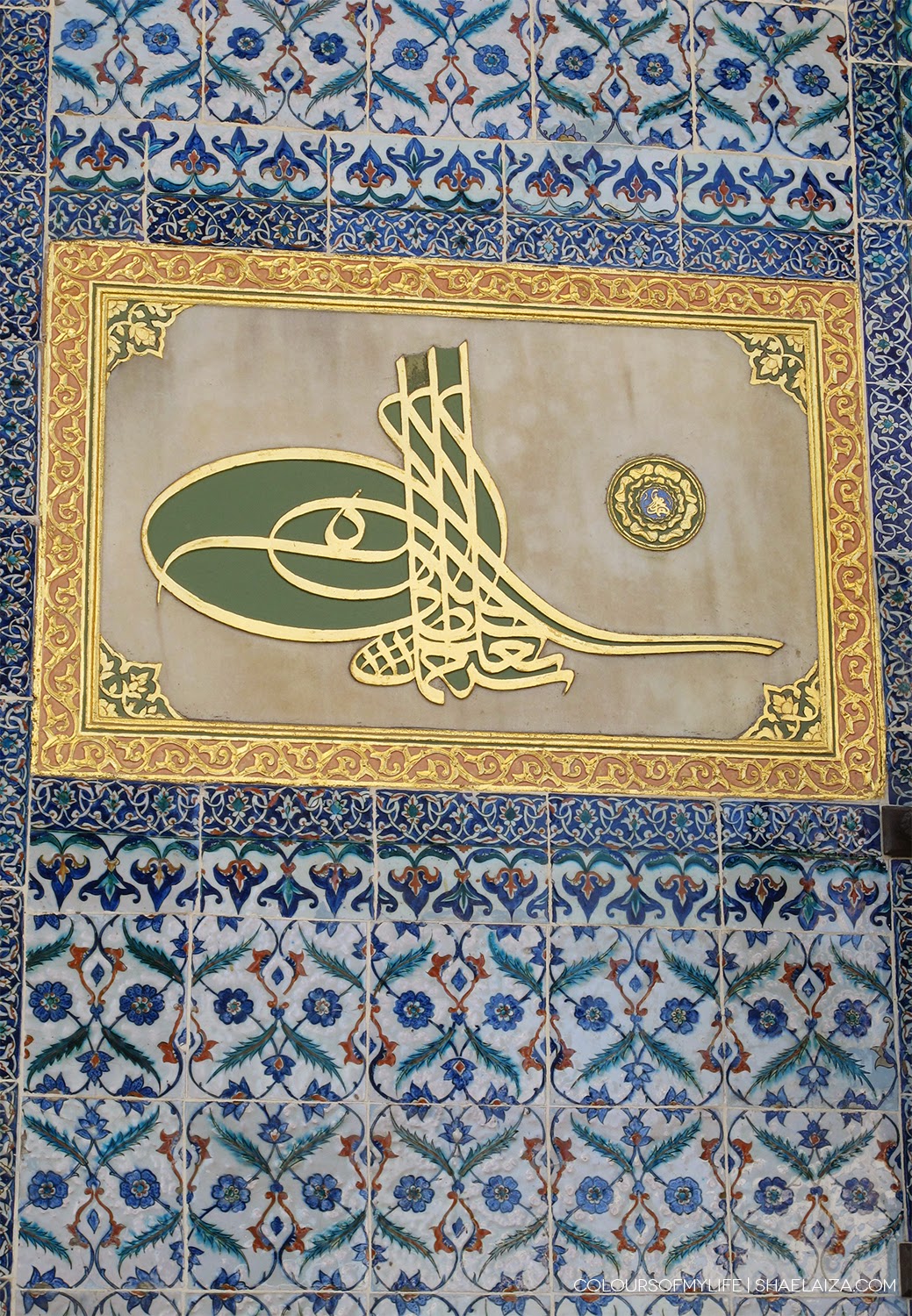 A calligraphic monogram (tughra) of an Ottoman sultan surrounded by signature Ottoman tiles. 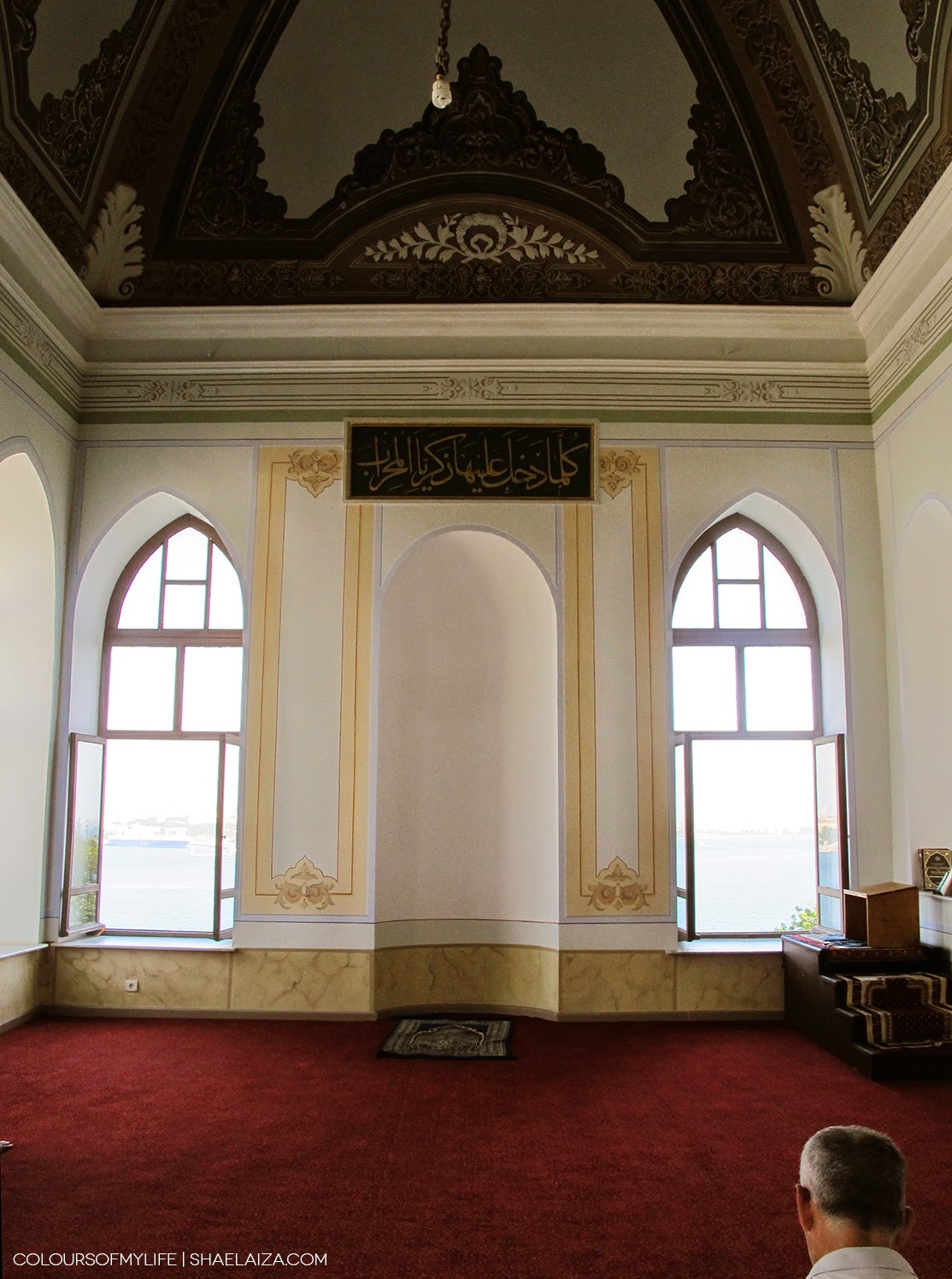 Inside the mussolah (prayer room) at Topkapi Palace. 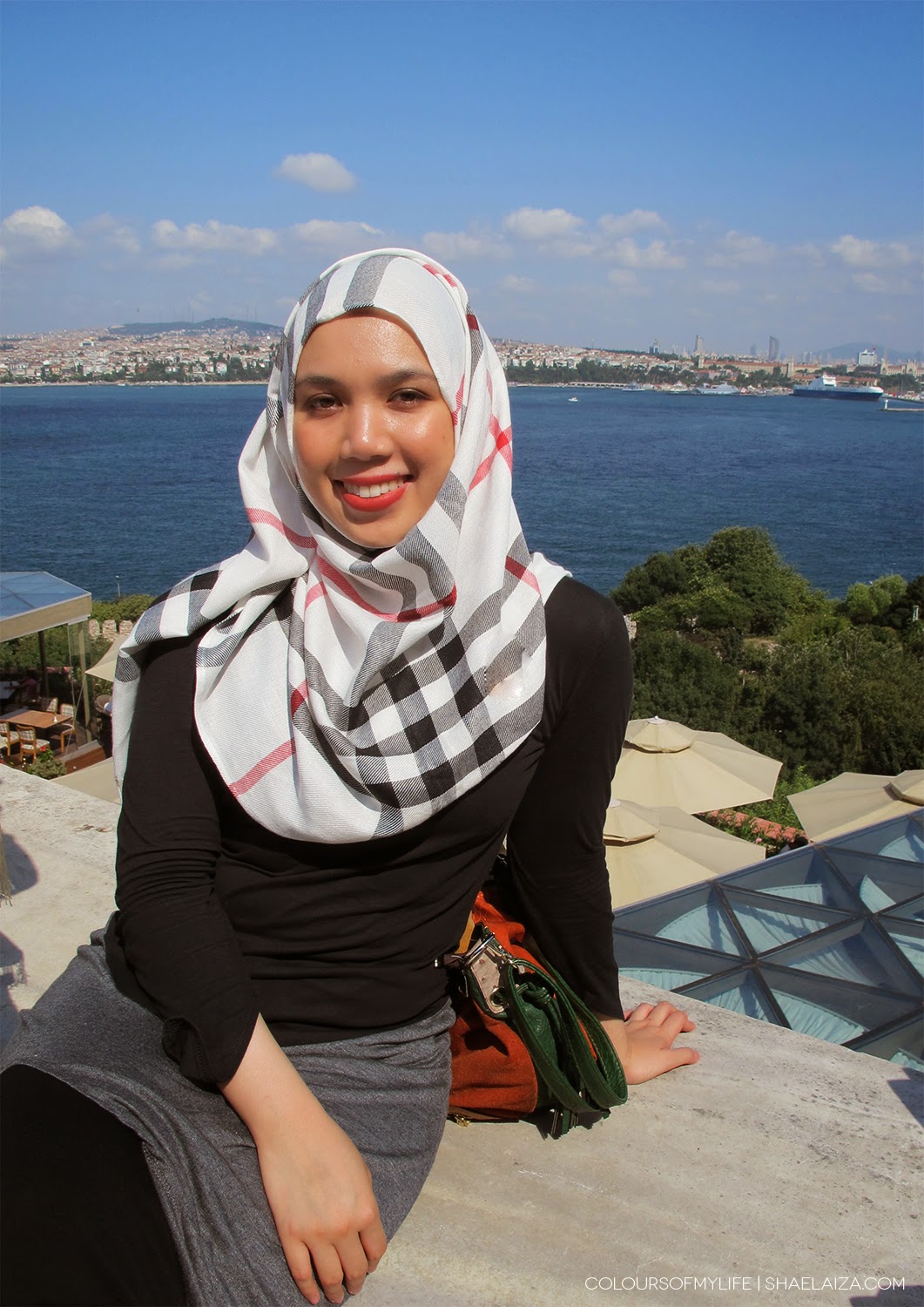 Breathtaking view from behind Topkapi Palace, above Konyali Restaurant.

As I mentioned before, I wouldn't recommend "She Tours". However, the upside is that their tour buses were new, clean and comfortable, it was easier to get to know other tourists, we didn't have to queue for entrance tickets (it was summer and most ticket lines were massive) and we had lunch at a nice restaurant which was included into the package during the second tour. Feel free to read the reviews on "She Tours" on Trip Advisor. But like I said, we don't have any regrets as it was our first time in Istanbul and we spent a total of 8 days in the city so we had time to explore it better than those who only had 2 -3 days there.

I have so much more to tell you guys. More in the next post, inshaaAllah.

Fida Islaih said…
I love your perspective and the pictures you shared! Turkey is on my list of places to visit!
8:05 AM

yasmine said…
We were in Istanbul the same time as you.beautiful city enjoyed it very much and looking forward to going there again.reading your post brought back lovely memories.
7:36 PM

Muslimah Delights said…
Miss Sultanahmet, miss topkapi palace. The food platter looks really good. Do you remember which place you got it from. It was always hard not knowing which place is the best to eat from.
7:06 AM

Anonymous said…
Turkey has always held a certain mystique for me, it is the next country on my list of places to experience.

Also... you are one amazing woman. I always say it and it's always so true.

Hanis Amanina said…
I was reading from blog to blog and then i found yours :) first of all, i wanna, you are beautiful! and this post kind of help me to imagine my trip to Istanbul soon. Take care yea :)

fiery said…
I will be in Turkey soon and I have booked y tours through Metis Travel and I hope it will come out really nice. this helped me to understand a bit more about Turkey. so, thank you
2:54 AM