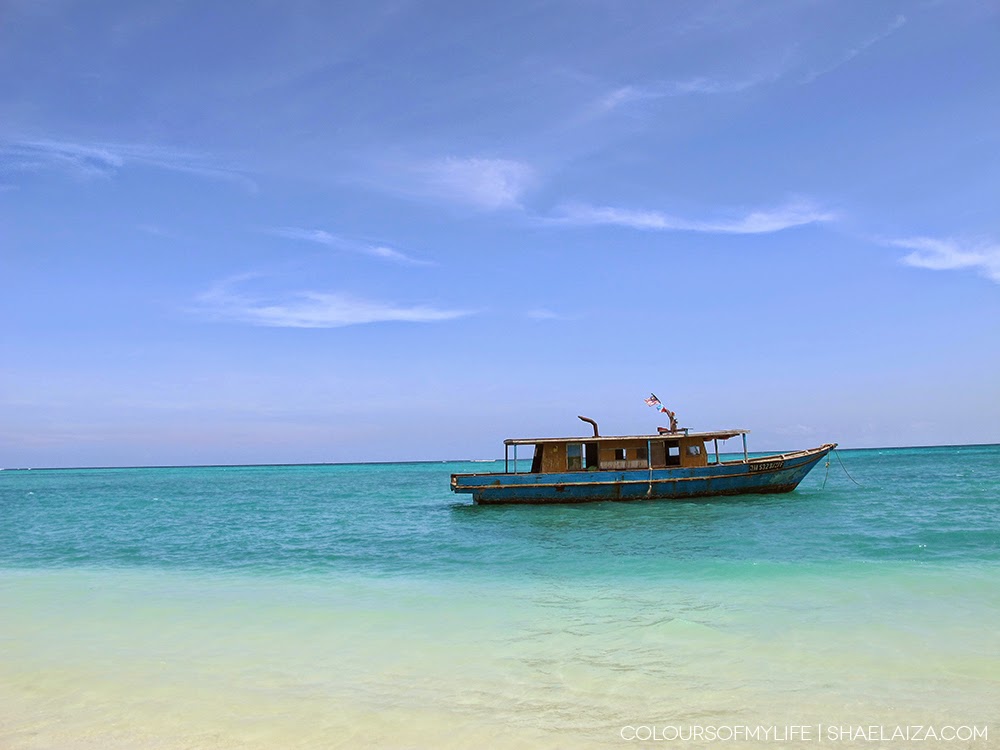 Before I blog about my trip to Turkey I need to do this. I promised you guys another post about Mantanani Island, Sabah so here it is. If you haven't read Part I, check it out because there's a video for you to get a gist of how our holiday went.

While the beauty of Mantanani Island is undeniable it saddens me to see the condition of the villagers and the way tourism and negligence will lead to the deterioration of the natural environment. As an island that was only recently made accessible to tourists around 6 years ago, its cleanliness is reflected in its pristine waters and white sandy beaches. On one side of the island, a few types of accommodations have been established to cater to the tourists. While I was there last year, they were in the midst of completing a five-star resort. This part of the island is pleasant and you will hardly find any litter or rubbish lying around. I was shocked to see the contrast between the side where I stayed and the other side — the village.

I had the pleasure of befriending Warna, Maya and Shikin, 3 girls who were not more than 10 years old in age. They told me their fathers were fishermen and that most men over there grow up to be fishermen or sought work in bigger towns like Kota Kinabalu or Kota Belud (which is 30 - 45 minutes away from Mantanani Island). It's quite a remote island with very little infrastructure and there isn't much to do apart from fishing or running your own business.  Most houses were made of wood and electricity was only available at night time. School teachers don't live on the island; they travel from Kota Belud via boat everyday. But I'll get to the infrastructure in a bit. Let me show you the breathtaking pictures we took at the village during sunset. 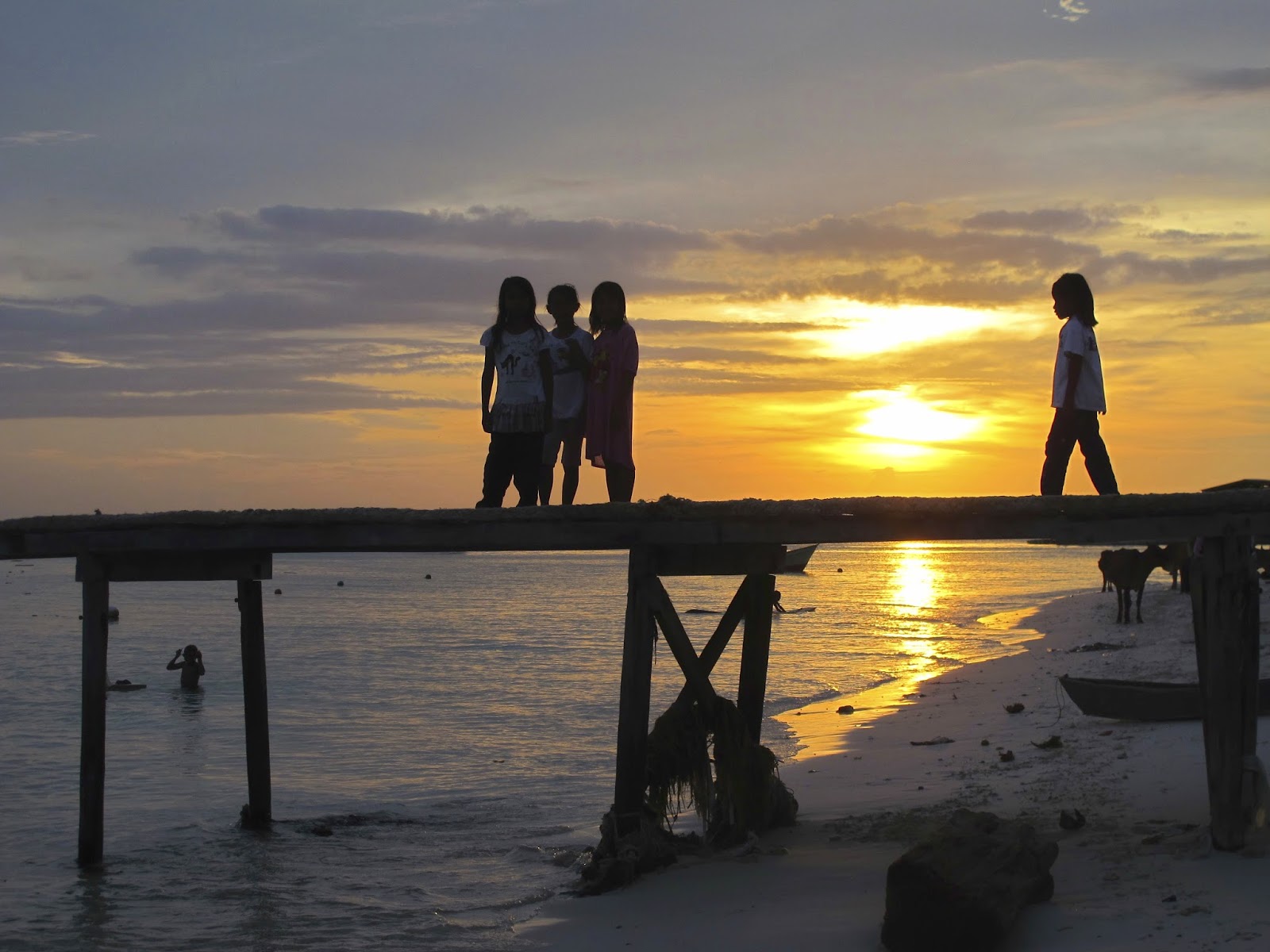 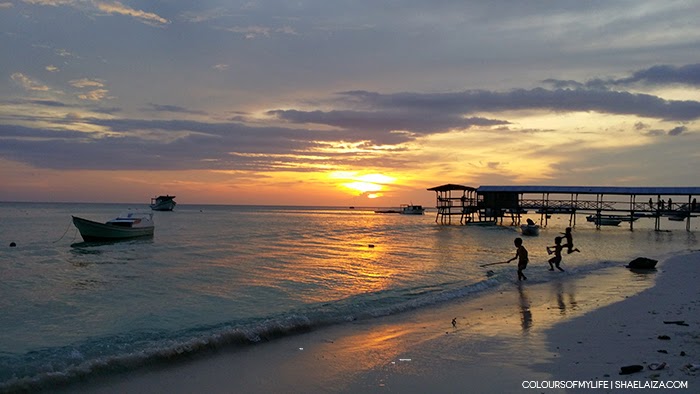 The local children played with each other. They swam. They built their own toys. I asked one of the girls if she could dive and she said she could - without goggles or an oxygen tank. They also said that they loved watching television but I could see they spent most of their time outdoors like any normal child would before the arrival of the New Media Age.

These kids were happy, creative, intelligent and friendly young individuals and I was glad to witness that. However, in their innocence they were also unaware of one the greatest blessings of their lives — the opportunity to live in an extraordinary place like Mantanani Island. That place was covered with rubbish and when we saw one of the girls littering we picked up the plastic bag and she said to leave it and not worry about it. I'm quite sure these kids learned this behaviour from their community.

Another sad thing we heard was that many of the fishermen would illegally catch fish by using explosives. This method is called fish bombing and it destroys a lot of sea life. We were told that no matter how many times the authorities have caught them they continue to do it because it's the easiest and fastest way to catch many fishes and make more money. You can read more about the negative impact of fish bombing over here. It's heartbreaking to know we, human beings, are doing this to nature all for the sake of profit. I know it's about survival but when people stop caring about the Earth no one wins in the long run. It's not easy to change the mentality of others. Something tells me it takes more than academic education  but also good parental upbringing to make the younger generation be more conscientious about the role they play in preserving and improving environment.

Okay, now let's discuss the infrastructure - or lack of it - on Mantanani Island. Can you imagine not having electricity until 6 pm everyday and not having proper roads? Let's not even talk about having a proper waste removal system. If I'm not mistaken they do have a mosque but more needs to be done to take care of the aqeedah and well-being of the villagers. The lack of basic infrastructure truly makes me wonder what is happening in the local goverment. I also wonder if the locals would object to development as I know some of the orang asli (natives) in Malaysia prefer to lead a very simple way of life.  Some do not want their children to attend school or pursue tertiary education. I have no clue as to why Mantanani Island is being neglected. To be fair, I was there almost a year ago but I doubt major changes have taken place apart from the existence of more resorts for tourists.

Sunrise during our last day on the island. One of the many signs of God's Grandeur and Greatness.


The girls looked for me the next day and even presented me with a farewell gift. I was touched. Innocence is truly a beautiful thing. I left Mantanani Island wondering if I would ever see these girls again or if they will have the same opportunities as I did when I was growing up. As bumiputeras, they would have access to education and government aid so I really hope that they grow up to be vibrant women who are happy and fulfilled, God willing. However, a part of me also wondered if their social condition would hold them back and if there's anything for someone like me could do to help. 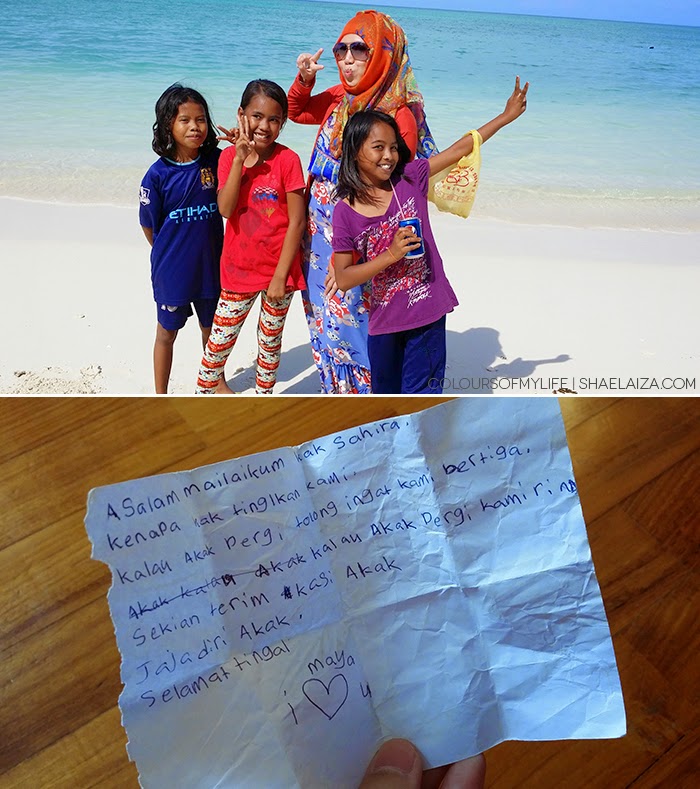 The note says:
"Peace be upon you Sister Sahira. Why are you leaving us? If you leave please remember the three of us. If you go we will miss you. Thank you. Take care of yourself. Goodbye."

Thank you Maya, Warna and Shikin for showing me the responsibility we have towards the younger generation and our country in general. I sincerely pray you will grow up to become leaders who will make a positive difference wherever you go.
Email Post
Labels: all things cultural holiday and travels malaysia

R S said…
This is a sad and beautiful post all at the same time. Yes, unfortunately with fast development there'll always be groups of people that'll be sidelined. I'm not a fan of all these resorts mushrooming out of nowhere to be honest. I know tourism is a great boost for the economy but the environment and welfare of people are compromised. That's 'capitalism' I suppose.

I pray that those girls will grow up wanting a bright future and also to give back to their local community. Meanwhile, you should totally go back to see them again. :)
12:15 PM

Shahirah Elaiza said…
@Sarina, yup, it's complicated. This is where I get overwhelmed about my responsibility as a Malaysian citizen and a Muslim. Would be great to go back to the island! :)
6:32 AM

framichele said…
Thank you for that nice impressions! I lived last year three days with a family of that Bajau Ubian population in the fishermen village. There exist a very good homestay program to share the life with the local people.
4:43 AM