Faith Friday: Hate the Sin Not the Sinner


*This post was meant to be published yesterday but I was only able to record the video today.  I totally have a new level of respect for vloggers now!  InshaAllah you guys had a blessed Friday*

I see it happen all too often. Sometimes in a passing remark, blog post or tweet, someone says such-and-such is a bad Muslim because they saw them doing this or that. As a weak human being I've done it too even  though I know negative comments like that, as opposed to constructive criticism, actually reveal more about the person who is projecting negativity than the subject of negativity. Happy people naturally spread happiness and want to help others when they see someone struggling. When we pass a judgement without knowing the person or understanding the context of their situation, what does it say about us?


Abu Hurairah (may God be pleased with him) narrated: I heard the Messenger of God (Prophet Muhammad, peace and blessings be upon him) saying: There were two friends in Bani Israel; one of them was sinful and the other was devout. Whenever the devout saw his friend committing a sin, he would tell him: Refrain from it. One day when he saw him committing another sin, he asked him to desist from it.

The sinful said: Leave me to my Lord and Sustainer. Have you been sent as my supervisor?

The devout one said: I swear by God! God will not forgive you or you will not be sent to Paradise.

When both of them died they were raised before the Lord and Sustainer of the Universe.

God asked the devout: Did you know about Me or did you acquire My authority and stop Me from forgiving  the sinful? So, God said to the sinful: Go and enter into Paradise by grace of my Mercy, and commanded (the angels) about the devout: Take him to the Fire. {Abu Dawud} 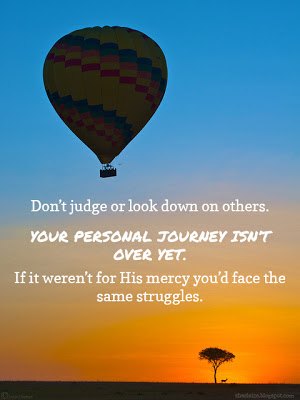 When I stumbled upon this hadith it made me stop and think. There are two key issues here: akhlaq (personal character or conduct) and self-righteousness. This applies to all of us because we are all prone to having bad character and being harsh in our opinion of others because we think we are better for some reason.

Having a lot of knowledge and experience can do that to us when we fail to recognise the blessings we have been given are due to Allah's mercy upon us. We should be thankful to God for every blessing (ni'ma or nikmat) - our possessions, knowledge, skills and abilities - because if He didn't will for you to have them none of it would be possible.

When we feel like we're on the right path (by wearing hijab, reading Qur'an everyday etc.) it's easy to slip into the holier-than-thou trap. Shaytan failed to deceive us in other ways so he plants the seeds of pride and arrogance into our hearts to make us seek knowledge and carry out good deeds not for the sake of Allah (swt) but for self-gratification and self-glorification. This is why we need to constantly renew our intentions and remind ourselves that the purpose of 'ilm (knowledge) and amil us-solihat (good deeds) is to be close to our Creator, gain His mercy and hopefully, enter Paradise. 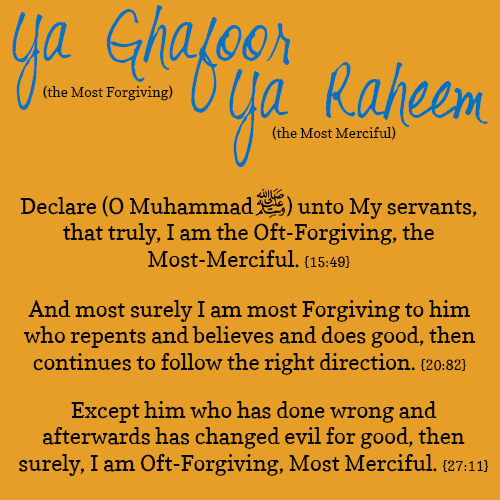 "Everyone has the potential of being good and of being bad. Therefore it is wrong to judge someone or something as totally good or totally bad."  Shaykh Abdul Qadir Jilani (may God be pleased with him), The Secret of Secrets, pg. 63


I love this quote by the late great Shaykh al-Jilani. It made me realise that when you love or hate for the sake of God you can never love or hate too much. This is because the attachment is to God, not to a feeling, idea or person.

And the hadith is telling us that we don't have the right to hate someone so much to tell them they're going to Hell. Yes, it's written in the Qur'an and hadiths that certain types of people will be punished in Hellfire but we don't have the authority to specify individuals. Everyone has the potential to turn their lives around and become better than you and I combined.


Before giving someone advice or naseeha we need to hold our tongues first and think about this: No matter how many times we tell a person what they're doing is wrong or sinful it's not going to make them stop if we make them feel inferior. Prophet Muhammad (pbuh) and the Qur'an were sent as part of a divine message of hope and empowerment. What makes us think we have the right to break people's spirits and remove hope from their hearts?

Note: The hadith does not imply that one should dare to commit sins. The sinful was forgiven by the Mercy of God but it is not necessary that every sinful person be treated in the same way. As a principle, there is a punishment for every sin. Nor does it mean that people should not be stopped from doing evil and wrong. However, the message to be conveyed is that a pious person should neither rely on his own good deeds nor pass judgments on the sinful nor consider himself to be superior to them.
(Source: Muntakhab Ahadith: A selection of ahadith relating to the six qualities of da'wah and tabligh)
Email Post
Labels: faith friday

Sarah said…
Salaam. What an awesome video, I see that you have the potential to become Malaysia's own Yasmin Mogahed or Oprah Winfrey, insya-Allah. :)

Right now in Malaysia, there is not just that discrimination given by the hijabis to the non-hijabis, but also from the 'Tudung Labuh-er' to the 'normal-sized tudung-ers'(this sounds weird, haha).

A friend of mine (a normal hijabi) once went to a talk given by one of those Tudung labuh people. The speaker kept on harping about how a daie should be particular on their appearances (in other words, by wearing the tudung labuh and all)so that it will reflect on their piousness or something and thus, people will be more attracted to Islam. And yes, I, myself had witnessed this situation which is also happening in my university. >_<

That got me thinking "Really, will people be more attracted to Islam when you hold that kind of prejudice towards them? How are you going to approach them in the first place?". This perception that only the 'Ustaz and Ustazahs-like people should be given the authority to preach or talk about Islam' should be changed.

On a last note, keep on vlogging! Inshaa Allah with this effort of yours, more people would be attracted to Islam. Islam is about moderation, after all. :)
9:23 AM

Sarah said…
Also, may I know the reference for the hadith? Thanks!
9:29 AM

Feda said…
Beautiful video and words Shahirah! You are such a beautiful woman inside and out. May God bless you for spreading such an important message. I've grown to feel that the minute you think you're better than anyone else you loose touch with yourself and humanity. Let us all be guided to love and light.
5:54 PM

Shahirah Elaiza said…
@WizardNox159, wasalaam, I truly believe that my brother's or sister's test is also my test in a way - a test of whether I'll be merciful, patient and helpful or presumptuous and intolerant. Easier said than done but inshaAllah, it can be done :)

It's an Abu Dawud hadith I read in "Muntakhab Ahadith: a selection of ahadith relating to the six qualities of da'wah and tabligh". The online version of this book is available: http://www.siratalmustaqim.com/muntakhab-ahadith-1.html
7:24 PM

Shahirah Elaiza said…
@Feda, Ameen! May Allah bless you for your kind dua :) And it's so easy to slip into the holier-than-thou trap. It's something I have to keep reminding myself all the time too.
7:28 PM

aishah amin said…
Thank you for this beautiful post Sha! I always love reading your blog!! May Allah reward you for your dakwah efforts<3

I think some of us were (inc. myself) conditioned to believe that we should e.g. hate kufr and not the kaafir.

My question is - how Islamic is this concept?

E.g. In Aqeedah Tahawiyyah, it is stated:

So the respected Imam RA did not say "we hate injustice and treachery". This is corroborated by Shaykh Naruji's (a contemporary Ash'ari scholar) short commentary: "We love the people of justice which is to obey Allah and trustworthiness, and we hate the people of injustice and treachery, not just their deeds and beliefs, as some absurdly claim, but the people themselves. After all, Allah punishes perpetrators, not perpetrations"

Also, to play devil's advocate further - if we are saying we hate kufr but not the kaafir, why don't we apply this on the flip side e.g. we love righteousness but the not the righteous people per se. (Logic may be a bit invalid here but nonetheless....)

Julie said…
Assalaamu alaikum. Masha'Allah this was beautifully said and a great reminder. It is so easy to judge others before ourselves and slip into a holier-than-thou mindset. Thank you for taking the time to post this. I can't wait to go through your older posts :) (Found you through littlelifeofmine)
8:36 AM

@erdeena, Wa alaykummusalam. That's like asking "How Islamic is the concept of Rahmah(mercy) and leaving things to the Qadr (destiny and will) of Allah?" Context is crucial too. What is the commentary addressing? A particular figure like Firaun or event involving the oppression of Muslims?

Hate is a heavy thing to carry in our hearts and a heart that is filled with love and gratitude towards Allah has no room for hate except hate that is for His sake - which is a hate that is not extreme (as I described in my video and post). Thanks for playing devil's advocate :)
9:29 PM

Naqya Kamsan said…
MasyAllah. This is really good, such a reflection! May Allah bless and reward you abundantly!
9:43 PM

Rosa said…
Another beautiful post from you, Kak Sha! I'm sure you would make a wonderful lecturer just like your sister :)
6:52 AM

Anonymous said…
Masha Allah! This was a beautiful video. I've had the similar experience that you've spoken about so this resonated very clearly with me.