The Gift of Gaza


When Operation Pillar of Cloud commenced in Gaza we turned to Twitter for coverage and commentary because the majority of mainstream media failed to deliver sufficient information. Harry Fear's live reportage of the 8-day war was one of the few that garnered worldwide attention on social media. From digital activism to real life activism, Fear is currently on a tour to speak about his personal experiences in the occupied land. It never crossed my mind that I'd listen to him speak in person someday but I did when he was in Kuala Lumpur a few weeks ago.

The never-ending clash between Israel and Palestine leaves many of us feeling helpless and hopeless. We talk about it. We sympathise. We empathise. We fundraise. But what can we, as ordinary citizens, really achieve to help the situation in Palestine? What do we do with all this knowledge we have regarding the injustice that is occurring over there?

The screening of "Naming Gaza's Dead" at UNISEL

What we can do: Apart from educating ourselves and others, it is also our responsibility to join the Boycotts, Divestment and Sanctions (BDS) movement. I have to admit that I was quite skeptical of the effectiveness of boycotting companies that actively fund the Israeli government to continue acts of state terrorism. However, Fear made a good point when he said:

"Boycotting is not only a good idea but a duty. But the danger is that it is done for self-comfort and without a political strategy. The point is to help Palestinians not our self-conscience."


It reminded me of what Shaykh Abdal Hakim Murad (Timothy Winters) brilliantly discussed in this video. Even though he was referring specifically to Muslim political groups it can be applied more generally as well. Boycotting is a pro-active and peaceful way placing international pressure on the Israeli government so support Palestinian products and stay away from these companies!

Support the right movements: Fear also mentioned that it's important for citizens to support political movements or groups that are supporting Palestine. Even though Malaysia is doing relatively more than some countries it simply isn't doing enough. I think the same can be said about other countries too. As Tariq Ramadan said during his visit to Kuala Lumpur last year, "The Palestinians' biggest enemy is the Arab nations."

"The current massacres are but a confirmation of the well-known: the "international community" does not really care about the Palestinians, and it is as if the state of Israel, with the support of the US and some European countries, has imposed a state of intellectual terror. Among the presidents and kings, nobody dares to speak out; nobody is ready to say the truth." Tariq Ramadan, 'An Alliance of Values', The Guardian

So what's Harry Fear like in person? Friendly, approachable and not surprisingly, very charming. It's no wonder people say there's always a swarm of girls waiting to say 'hi' and take a picture with him. I thought I'd just take a quick snap and leave him in peace but he spoke to me and even saved me from major embarrassment at one point (long story, don't ask #storyofmylife).

I'm grateful that I often meet inspirational people and Fear is one of them. He's doing what I want to do - journalism, documentaries, travelling, connecting with people from around the world and most of all, making a difference -  and he's doing a pretty good job of it too. He is someone who is completely in his element and I envy him for that but what I admire most about him is his sincerity. I think I speak for many when I say I wish I personally knew more people like him.

Having said that, I have two friends who have inspired me to do more, not in only in terms of helping Palestine but also in committing to a cause regardless of how busy I may be because of work.

Kautsar works in the legal department at Securities Commission and Husna is a full-time doctor who works in the emergency department. Husna's dad, Dr. Musa, is the chairman of Viva Palestina Malaysia and Young Muslims Project and naturally she often volunteers at their events. Kautsar visited Gaza in December 2012 and Husna went in January 2013.  Recently, Husna held a gathering at her house so she and Kautsar could share their experiences with others.

Kautsar shared this video which she and her friends over at Sesi Seni Collective created.

"The video clips and photos compiled in this video are from the period of 3 weeks after Operation Pillar of Cloud in November 2012. The Gaza Strip had just suffered an 8-day war but it gained some rights and land after the ceasefire agreement was made (brokered by Egypt). They were anticipating and celebrating the 25th anniversary of  the ruling party's (Hamas) establishment.

It was a pleasant surprise and definitely an eye opener to be embraced by warm and friendly faces and to be a part of a huge gathering that is very spirited and moving. The reality for most of them is to move forward towards victory, and that means not giving up and not getting broken by the war, suffering, loss and poverty. This hope for a brighter future is why we need to keep holding a torch for their cause."


She even came up with a photography campaign for photographers, journalists and activists who plan on going to Palestine in the future.
(click on the images to enlarge) 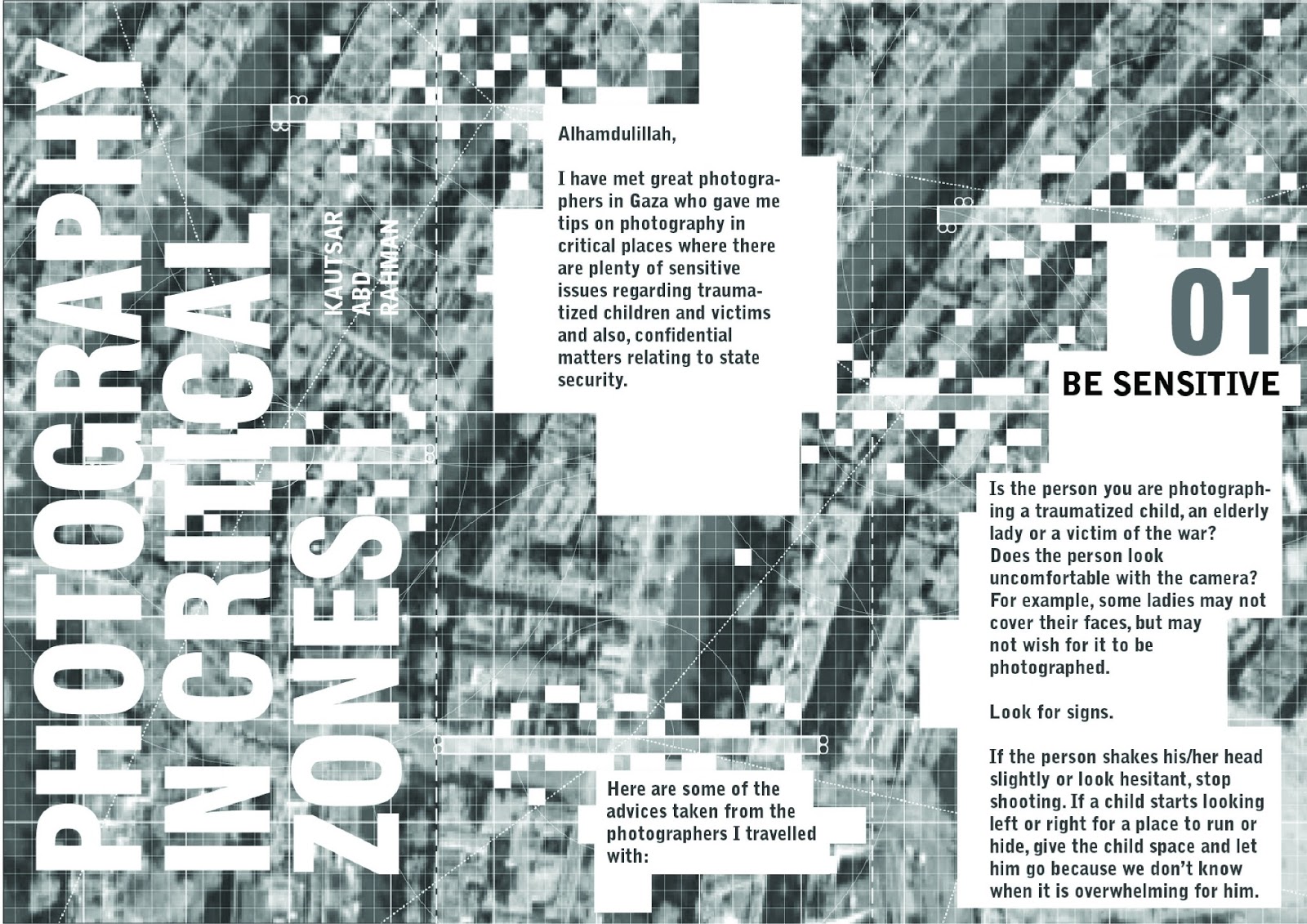 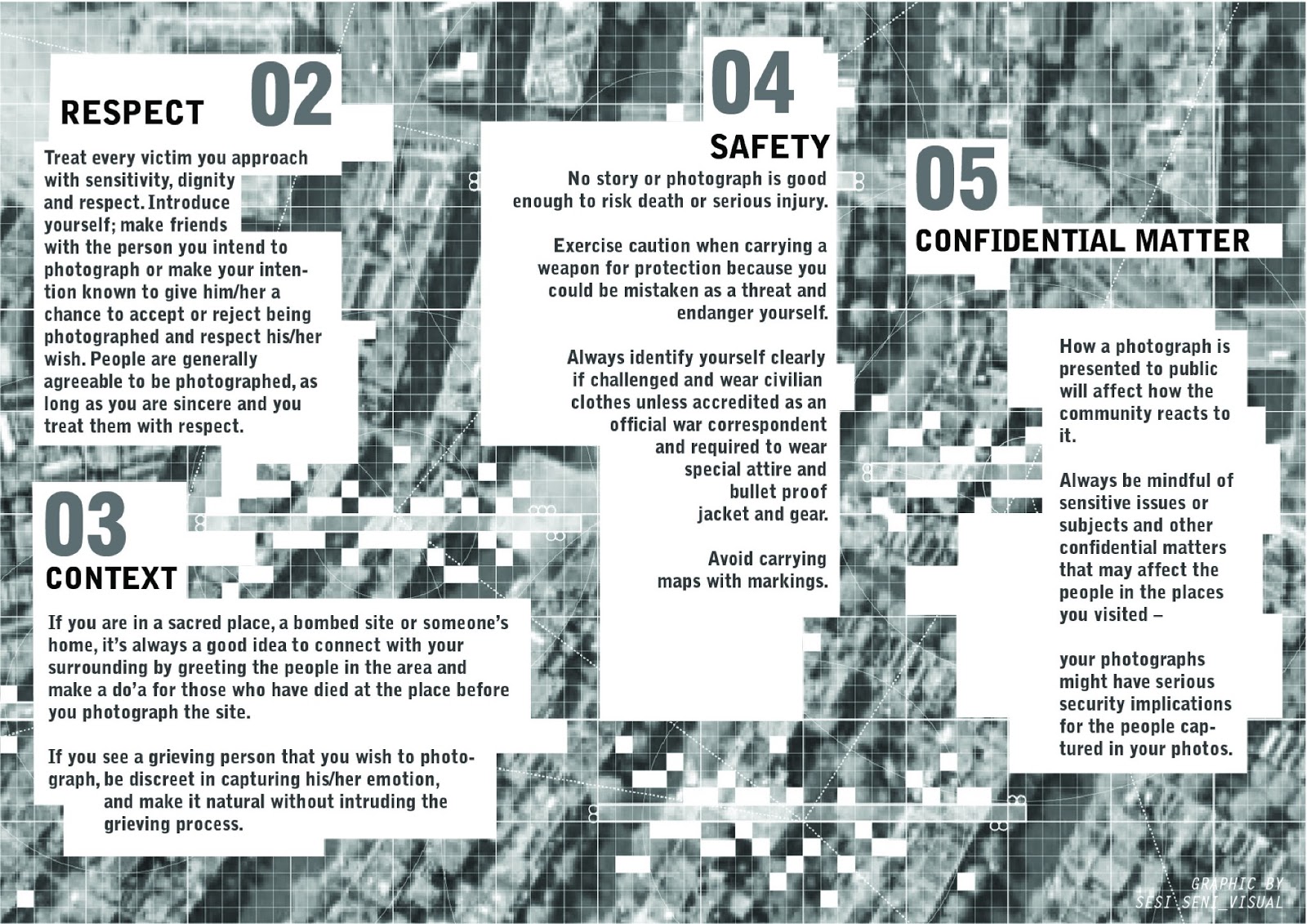 Husna shared eye-opening photos and anecdotes about Gazans. One particular story was unforgettable to me.

"I met an 8 year old boy who had memorised the most of Qur'an and I asked him what were his plans for the future. Without any hesitancy he replied, “I want to be like my grandfather [who died as a martyr]. I want to be a mujahidin to set Palestine free." I also met the boy's 3 year old sister. We were told that she memorised Juz Amma (the last 10 chapters of the Qur'an) and when we tested her to see if they were telling us the truth she could really recite what we asked her to!"


Firstly, an 8 year old has memorised the Qur'an and he wants to free his people from oppression. Secondly, his 3 year old sister has memorised Juz Amma.  Amazing, subhanaAllah. I'm 25 and I haven't memorised Juz Amma. We really have to think about what these children have gone through to have such a mindset about their purpose in life. Aspiring to become a mujahidin may sound extreme but it reflects the environment he lives in. Kautsar and Husna both described the Palestinians as the most Akhirah-centric people they've met, mashaAllah.

"Each of these anecdotes, and there are loads more of them, brings to life the perennial struggle, resilience and tenacity of the Palestinian people to bring to fore the universal values of justice, freedom, peace and self-determination. The inhumane siege and occupation, the apartheid and neo-holocaust policies of the Zionist colonisers has not the least broken their spirits."


At this point I recalled a question I had asked Harry Fear during his talk in UNISEL.

"Why do many Palestinians choose to remain in Palestine?"

"Religion (and faith), a belief that their land is special and that the Palestinian identity and culture is worth something, and cohesive social resilience," he answered.


Gaza, and Palestine as a whole, may be a war-torn land to us and a blind spot to others, but to its people it is a gift worth struggling for, worth fighting for and worth dying for. How many of us can say we feel as strongly about anything in our lives? Perhaps this realisation is Gaza's gift to us.
Email Post
Labels: events in the news Palestine the struggling Muslim

DV said…
Great writings from the ladies. Have the guys lost the plot and/or the art? Everyone of u r champions for Palestine. We need more "Fear-less" writers to mainstream the cause, make more noise, be more visible and debunk the Zionist lobby which r all so pervasive. Good job ladies. Dr Musa VPM
1:38 AM

washi said…
Wow! What a powerful post...evokes very strong emotions in me.

Visiting Palestine was such an eye-opener, and I've often wondered what more I can do to help their plight. I know I've been very blasé about the call to boycott Israeli-funded products and companies; of which there are plentiful in Cape Town. SubhanAllah! And I lived through Apartheid in South Africa, and know the power of boycotts and political isolation *smh*

This post has truly inspired me to be more...jazakillah khayran
1:50 AM

Wan Melissa said…
The title of this post caught my eye. Prior to this I never really thought of Gaza as a 'gift' but as you have illustrated in your article, indeed the spirit of the Palestinians is a gift that should awaken the Muslims from their deep slumber. Question is, when will the Muslim nations wake up?
4:16 AM