Are Women in Media Getting Dumber?

Harsh words, I know, but I have your attention now, don't I?

Yesterday I thought about why journalism means a lot to me. It's not necessarily a field many women flourish in, particularly when it comes to investigative journalism. Where have all the women political journalists gone? Though it is subjective, why were only 22 women listed as outstanding journalists in the last century?

A myriad of questions flooded my mind. Is the nature of the job incompatible with the role of women in society? Are women generally disinterested in current and political affairs? Are women simply being "dumbed down" by the media? Are men and women always telling women what they can and cannot do?

I had the opportunity to ask Mustafa Davis, a filmmaker and photographer whom I admire as someone who seems to be balancing his faith and career very well, what he thought about the role of Muslim women in media (2:15 - 3:33). Part of his answer was: "If you have an influence on people then keep doing what you're doing." It seems a bit silly that I felt I needed to be assured by someone (a man) but I wanted his take on the issue.


Can we blame society and media for the stereotypical representation of women? Yes but only to a certain extent. As important as it is to consider the impact of media framing and conditioning of women and also society's perception it is more important for women to think and reconsider their perception of themselves. This begs a crucial question: What are we doing about it?

My friend Rosie from New York is currently pregnant with a baby girl and we often have Whatsapp conversations about what it would be like to raise a daughter in today's world. Rosie was raised Catholic and she has very strong values which explains why we get along very well despite never having met each other in real life. She sent me a link to an article entitled How to Talk to Girls and another link to a book by  American attorney and author, Lisa Bloom.


Bloom is very passionate about improving the lives of both girls and boys (who will grow up to be adult members of society one day) by countering the "dumbing down" of society through better parenting and education. She has written two books, Think: Straight Talk for Women to Stay Smart in a Dumbed Down World and Swagger, to address alarming issues about children and young men and women of today. (This is an extreme example but does Honey Boo Boo ring a bell?)


After watching this interview of her I thought, "We need a Muslim version of Lisa Bloom." Someone who can bring  substantial issues to the forefront. I think some people might find Bloom's views offensive but there's truth in what she says especially about girls and women being obsessed with fashion and celebrity culture and how that negatively impacts their self-esteem and self-image. It's one thing to have an interest in these things but it's another to be distracted from more important issues because of an obsession with superficiality and materialism.

We need more women like the late Amina Assilmi (may God have mercy on her soul) who held degrees in education, communications and broadcasting. Women like Ingrid Mattson, Dalia Mogahed, Wardina Safiyyah, Muna Abu Sulayman, Kübra Gümüşay, Myriam Francois-Cerrah and Lena Khan (support her movie!). And young women like Malala Yousefzai. The more I learn about Muslims around the world the more I realise that there are many outstanding Muslim women whose voices should be heard but there seems to be a lack in representation, particularly in mainstream media, and you really have to wonder why. 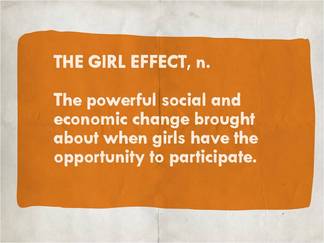 The "girl effect" movement mentioned by Bloom, though not without criticism, is worth considering. Thinking about it was a wake up call for me and I realised that a similar notion behind this movement exists within Islam; a notion which highlights the value and raises the status of a girl or woman not only within a family but also the society she lives in. Why aren't we representing that? Instead defending Islam by constantly telling people how it raises the status of women why don't we just practice what we preach?

When I observe a trend in media today I couldn't help but ask myself: Though a somewhat important and fun aspect of a woman's life to discuss, do we really need another blog, magazine, talk show or reality television show focusing on fashion and beauty and based on tabloid journalism? I'm sure there are other things women are interested in or that they should be interested in. That's why websites like MuslimahMediaWatch and AltMuslimah are great and mainstream media should emulate them! As Bloom has discovered through research, many young women tend to live in a bubble and it's no longer enough to create awareness of social, political and spiritual issues. We must also create interest and to do that we need to think outside the box. Creativity is no longer an option but a must and responsibility in media agenda-setting. Furthermore, we are living in the age of digital revolution and we have more autonomy in the content we consume and produce (e.g. YouTube). Why aren't more women setting the agenda? Why are we still allowing a corporate-funded medium to dictate what and who we should be interested in?

Anyway, I've sort of digressed from my original topic. Do women, Muslim and non-Muslim, have a place in media and journalism? If they have good intentions I say most definitely and even more so today. It has nothing to do with women being in competition with men because the desire to educate and nurture is an innate part of female character. The journalism industry, especially investigative journalism, will always need a woman's inquisitive, persuasive, compassionate and creative touch.

But are we ready to take women - including Muslim women - seriously?
Email Post
Labels: masha'Allah muslimah Muslims in the West superwoman women in Islam

Hadramawt Kingdom said…
I found your thoughts really intrigue and makes me realize how we women being dumbed-down by media. Its really2 rare to see a woman speak or give speech on media nowadays especially on the national agenda, economics, political and all serious matters. How sad..for myself especially.
4:27 AM

Anonymous said…
Thank you Sha..very nice observation.Somehow this reminds me of the saying..
"No one can make you feel Inferior without your consent "
~quote by Eleanor Roosevelt
1:27 PM

Amirah Zainal said…
"The more I learn about Muslims around the world the more I realise that there are many outstanding Muslim women whose voices should be heard but there seems to be a lack in representation, particularly in mainstream media, and you really have to wonder why."

I couldnt agree with you more.

Anonymous said…
Mashaallah this post is so intriguing,so thought provoking.Makes me feel like just getting up and doing sth about the situation :).In shaa Allah many more sisters will start to think like this and realise that muslim women have an obligation to set the record straight about what true femininty is about.Because society seems to have brainwashed most of us.Naudhubillah.Jazakaallah khayran sis n may Allah sw guide us to the straight path Ameen :)
12:30 AM