Just the other day I was chilling out at my friend's house when one of our friends walked in and saw me without hijab for the first time in a very long time. "It's like the old Sha again!" she exclaimed.

Lately people have been asking me why and how I decided to change and become a "religious Muslim". (By the way, I don't consider myself more pious or religious now. More dedicated and spiritual, perhaps.) Some people assume that this change was motivated by a bad life experience. I understand why they would think so. Many people who go through this change usually went through something horrible to make them turn to God. That's not my story. Well not entirely. I did lose my Dad and it was life-changing but it wasn't enough to make me take that huge leap of faith.

My story began as I started learning about Islam purely for the sake of personal interest when I moved to New Zealand 8 years ago. Prior to that, Islam was something I learned to accept because I was born into a Malay Muslim family and studying about Islam was mainly done because I wanted to pass the Pendidikan Agama (Islamic Studies) subject in school. When I was a high school student in New Zealand I took advantage of my sister's access to her varsity's library and its vast collection of scholarly books about Islam. One of the first books I picked up was Islam: A Mosaic, Not a Monolith authored by Vartan Gregorian.  I was very intrigued by the title of the book.  After reading several books, attending Islamic talks by prominent scholars such as Sheikh Yusuf Estes and Abdurraheem Green, and befriending Muslims from around the world, slowly and gradually I gained an understanding of my faith that I knew wouldn't have if I had never moved to New Zealand.

Although my knowledge and comprehension of Islam increased, it took me six years to whole-heartedly embrace Islam and commit to becoming a practicing Muslim. It wasn't easy but somehow it became easier with time, alhamdulillah. And I'm sure people wonder why I wanted to change in the first place. I did it for various reasons but they are connected to one very simple reason - I felt very thankful to God, Allah subhana wa taala (the Sacred and Almighty). It's true what Imam Suhaib Webb said: "The head of servitude to Allah is to be thankful."

Have you seen this video of Beyoncé?

I asked myself the same questions too.

Yes, I do miss the old Sha sometimes as I know some of my friends do. But whenever I feel that way I  just remind myself that the old Sha is still there. She's saving herself for someone special. She is learning. She is struggling. She is growing. She is shifting her priorities in life. More than anything else, she is eternally grateful for the way God has orchestrated her life.

"When you feel the need to turn back to God, this is the clearest sign that God has already turned to you."
- Imam Suhaib Webb in 'Giving Thanks' (courtesy of the ISBCC) 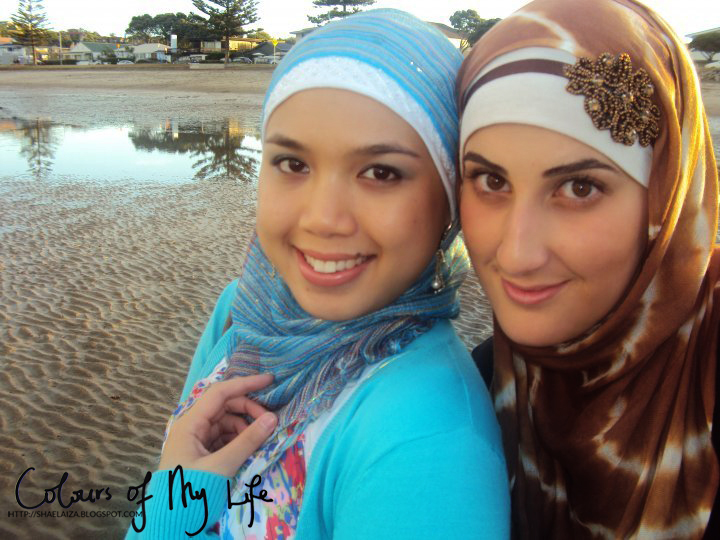 Taken with Shaymaa on my first day of officially wearing hijab.
10th March 2010 - 10th March 2012
2 year hijab anniversary, alhamdulillah!
Please pray for me to be steadfast in my deen. Your duas are greatly appreciated =)

"O our Lord, do not suffer our hearts to go astray after You have (rightly) guided us,
grant us mercy from You, for verily You and You (alone) are the ever Bestower."
{Surah Ali Imran, 3:8}

purplelurve said…
Happy 2 year anniversary!! for both of us!!! love this post. Hope we can be better Muslims!
11:23 PM

Diana Abdul Molok said…
thanks for this post Sha... I don't know how you do it...but I salute you for your decision to wear hijab.
1:38 AM

@Diana, you're welcome. Most obstacles exist only in the mind. Once you realise that everything else becomes easier inshaAllah. The most important thing is to be sincere with Allah swt and take baby steps towards Him.
4:38 AM

I too have a loooong way to go.

Pray that Allah keeps us all in the right track, now and forever.

nad said…
all the best and have faith in Allah swt :) ur story kinda the same with mine and Alhamdullilah im in the right track now.it's never too late to change.keep it up sis.may Allah bless u :)
8:12 AM

Shahirah Elaiza said…
You girls are so sweet. Thank you so much! May Allah swt give us hidayah and lead us to the Straight Path whenever we go astray.
11:09 AM

Big mubaruk on your 2 year hijabiversary :D May Allah always keep you under His guidance and strong in imaan, lotsa love always xx
5:19 PM

MissM said…
I think this is my favourite Faith Friday post yet.

Congratulations on the two years.
5:19 PM

Noor Of My Life said…
I had that same feeling about 15 months ago a urge and feeling that would not go away, Alhamdulilah Allah swt had guided me towards Hijab, and during that time i stumbled upon your blog and it was so inspiring so thank you sha, may Allah swt guide us all and keep us strong in our faith.
5:40 PM

the folowing blog of an american new convert sister may help born and new converts.

Sister Rebecca a revert to Islam in 2008 has inspired her parents to accept Islam by her right attitude of islamic teachings on them.
Read her awesome story and Watch it out :

Tahirah said…
Masha'Allah congratulations on being strong sister! My 1 year hijab anniversary is coming up soon too! Insha'Allah we are all rewarded for our efforts and may we be accepted into paradise!!
6:45 AM

Fairuz Izman said…
Ameen to all the duas.

I pray that you are blessed with a righteous and loving spouse who will appreciate your inner and outer beauty, ameen. Good things come to those who are patient ;)
9:13 AM

[i.l.y.a] said…
You've inspired me in so many ways and i can relate to each and every sentences you wrote. This post give me teary eyes.

Shahirah Elaiza said…
@Ashi, I knowww. It's crazy how much things can change within a few years. Ameen to your duas love and the same for you inshaAllah xo

@Noor, mashaAllah, and may He continue to guide us both, inshaAllah. Nothing is possible without him. Ameen to your duas xo

@Tahirah, mashaAllah, mabrouk to you. Ameen ya rabb alameen. Paradise is our ultimate goal inshaAllah!

@Fairuz, ameeeen ;) and may He bless you with children who will be the coolness of your eyes inshaAllah!

@ilya, alhamdulillah, it's good that we can inspire each other. What is good is from Allah swt and what is bad is from my own mistakes. Thank you for the wish! xo
10:13 PM

Nai @ TPJ said…
Last week someone I know told me she's gonna wear hijab for good. I said, well dear you are a pretty lady. When u wear hijab, u're still a pretty lady, but now u're also exclusive. Coz all exclusive things are covered. The more exclusive a thing is, the more covering it gets, be it in boxes, curtains, dividers, partitions, etc etc. :) that's a way to see it, dear...
1:05 PM