Turn your magic on,
Umi she'd say
Everything you want's a dream away
Under this pressure under this weight
We are diamonds taking shape. — 'Adventure of a Lifetime', Coldplay


I like intense and philosophical conversations, which is why I find myself drawn to two types of people: those who have the ability to move me with their intelligence, sincerity and honesty (to complement my intensity) and those with a wonderful sense of humour (to relieve me from my intensity). I am fortunate enough to say my friends consist of people with such traits. Anisah is one of them. I don't remember what we were talking about specifically but at one point she turned to me as she was driving and said, "You should listen to Chris Martin's interviews. Did you know he reads Rumi and fasts once a week?". (In Islam, it's a sunnah or Prophetic tradition to fast every Monday. By the way, noticed that he referenced Mos Def's song 'Umi Says'/'Mother Says' in 'Adventure of a Lifetime'?)

I don't think we should celebrate a non-Muslim's, white person's or Westerner's appreciation of Islam any more than we should of anyone else's but out of curiosity I watched a few interviews featuring Chris Martin and read a number of recent articles about him to find out what his deal was. I realised not only is he very creative but he is spiritual too. It's evident how Islamic or Sufi elements have influenced his song writing for Coldplay's latest albums, 'A Head Full of Dreams' and 'Ghost Stories'. In an LA Times  article, he admits to seeking 'teachers', including a Sufi teacher, to help him deal with his troubles and says 'he found solace in Rumi's words about accepting everything as a blessing'. He claims Rumi's poem, 'The Guest House', completely changed his life. In another interview he references 'The Conference of the Birds', a 12th century Persian and Sufi poem written by Fariuddin Attar. 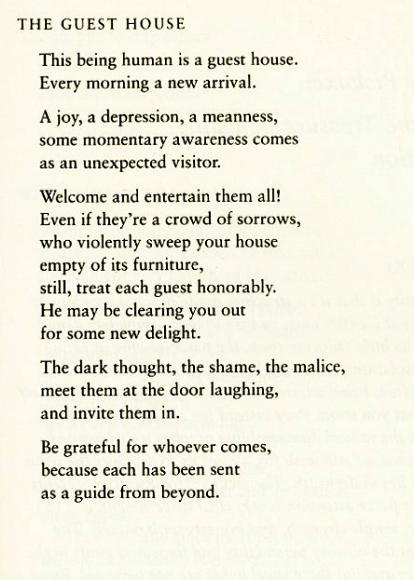 An inclination to spirituality is something I appreciate about others even though they may not be Muslim. In fact, I believe it's a sign of God's mercy that anyone can be spiritual. Often times I feel a greater connection with spiritual people than I do with so-called religious people due to the latter group's unrelenting dogmatic and harsh ways. I understand the importance of discipline, which is an integral part of being Muslim, but I don't respond well to harshness or hypocrisy.

The incorporation of Islamic spirituality and Sufism in my life has made tasawwuf (purification of the heart) and tazkiyah an-nafs (purification of the self) the main goals of my relationship with God and the underlying motivation behind my religious observations and ibadah (acts of worship). As I study Islam the more I see it encourages self-awareness. The one who knows himself, knows God. As Imam al-Ghazzali wrote in his book 'The Alchemy of Happiness',

Know, O beloved, that man was not created in jest or at random, but marvellously made and for some great end. Although he is not from everlasting, yet he lives for ever; and though his body is mean and earthly, yet his spirit is lofty and divine.

Knowledge of self is the key to the knowledge of God, according to the saying: "He who knows himself knows God," and, as it is written in the Qur'an, "We will show them Our signs in the world and in themselves, that the truth may be manifest to them." (41:53)


My struggles as a Muslim reveal to me what my strengths and weaknesses are, which is important to me because I believe it's important to work on improving ourselves. For example, the hijab is something I still struggle with and Islam's negative representation in Western media hasn't made it easy. However, one of the reasons I love Islam is the perspective of life provided by Sufism which is not as self-indulgent as some may think it is. Sufism places a lot of emphasis on disciplining the ego. Perhaps that is what intrigued Martin to Sufism. And by the way, Anisah was right, he does fast one day a week.

In an interview with Zane Lowe, a Kiwi DJ, Martin seemed at peace even when alluding to his divorce from Gwyneth Paltrow (the songs 'Magic and 'Always in My Head' are about how feelings are not always simple and that he will always love Paltrow despite their separation). And I know it isn't easy to master peace, in general. It's something that comes with age and a lot of practice. In most of his interviews, I perceived his spontaneity as a reflection of his genuineness, humility and honesty.

CM: One thing I'm learning is that I don't mind what anyone thinks. Some people think we are making a record. Some think we are the best band, the worst band, we're this, we're that. It's okay.

ZL: That used to be a problem. You were concerned about how people reacted to answers or interviews. We've had conversations after interviews where you would ask, "Did that come across okay?". What was the turning point for you whereby you started to let that go?

CM: The wonderful people around you start to be affected by your insecurity... and sometimes it takes a trauma to get rid of it... What changed? At some point that insecurity stuff doesn't make any sense and it affects your loved ones... this is a realisation about trying to grow up. If you don't open yourself up then you can't appreciate the wonder outside. You can be with someone wonderful but because of your own issues, I don't want to get too personal, because of your own issues you can not let that be celebrated in the right way. What changed for me is I don't want to go through life being scared of it. Being scared of love. Being scared of rejection. Being scared of failure.

... There were lots of songs written. The way we and I wanted to put it together was [for it] to be the journey from looking at everything you're going through in your life, be it good or bad, and thinking am I gonna run away from it? Am I gonna blame for it? Am I gonna deny it? Am I gonna self-medicate? Or is there a way that by really digging, opening yourself right up to it that you might actually get to a more joyful place...  I was not completely vulnerable and it causes problems. If you don't let love really in then you can't really give it back.


Realistically, I will probably never know who Chris Martin is behind his persona but I think it's rare for someone in the entertainment industry to speak so fervently about spirituality, self-awareness and spreading positivity. During this funny yet philosophical interview, Martin's positive energy shines through and he mentions that he believes when 'bad' things happen they can be seen as a blessing (which reminds me of this prophetic saying or hadith).

I'm glad he found Islam as a source of peace even though he isn't Muslim. It shows Islam has a universal appeal and can benefit everyone. Unfortunately, Islam isn't always represented in the best light by both Muslims and non-Muslims. Islam upholds high moral standards but practicing it gets easier the more we work on our ego and surround ourselves with positive influences. I sense it has taken a lot of ups and downs for Martin to feel the way he does today and that's something I can relate to. In many ways, Islam is a 'sky full of stars' to me. It has helped me get through a lot but as they say, "Faith can move mountains but don't be surprised if God hands you a shovel".

My personal challenges have resulted in a sense of peace and calmness after I have overcome them. They have taught me resilience, patience and the beauty of embracing and submitting to what is. Submission is often seen as a demeaning process and state but when I think about it anything except submission is a state of denial. We may have control over certain things and we're encouraged to be accountable and responsible for them but we can't deny that the overarching nature of this world is defined by the mystery that surrounds us.  Hence, Rumi poses the hypothetical question, "Who are we in this complicated world?".

Bella Alias said…
Thank you so much Shahirah. Beautifully written. Thank you.
10:23 PM

Yantie said…
I loved this post and it's awesome to see people embracing another culture's and religious teachings! It's so cool that some of my favourites songs were influenced by islam and sufism.
It would be super awesome if you do a blog post on the purification of the heart and self! :)
-Yantie xx
5:31 AM

Shahirah Elaiza said…
Ahhh you're the sweetest, Yantie! <3 Thanks. I will consider writing those posts!
10:27 PM

Shahira said…
Hello Shahirah from yet another Shahira.

I used to read your post a long while ago (2011 i think) when you were on blogspot. I came across your blog again today and happy to see your updates :-)

Shahirah Elaiza said…
Hi Shahira, it's always nice to 'meet' another Shahira(h) :)
4:21 AM

Unknown said…
I stumbled across your blog searching for answers. I am so glad I did! I have been feeling a little disconnected from Islam, and Alhamdulillah I'm happy I'm not the only one who sometimes feels this way. I have tried reaching out to other muslimahs but I haven't been able to get what I needed. Thank you! I think I might even be a part of your tribe! I will continue to read your blog posts. In Shaa Allah
7:14 PM

Zur Hanis said…
Hi Shahirah. I used to read your blog years ago and after quite awhile I came across yours again. Your writing has always inspired me to rethink and remapping my soul from different perspectives, from different part of the world. You're being blessed by Allah with the liberty of speech and faculty to write, so keep on writing. Looking foward to more of your wonderful works. Lots of love, Hanis
2:30 AM

Shahirah Elaiza said…
I'm glad you feel that way, Alraqia! Thanks for your support. I hope you'll meet Muslimahs who'll make you feel part of their tribe wherever you are :) And if you don't, I can perhaps connect you to a few if I know anyone living in the same city as you. I believe it's important to be part of a community.

Thank you for reading my blog, Zur Hanis! Alhamdulillah, I do what I can and sometimes I do lose my ability to write well (writer's block, argh) but that just means I need time to read and reflect. Hope to see more of your comments :)
11:02 PM