On Paris, Jihad and Western Privilege

The crime that was committed against you yesterday was another senseless and heinous act caused by ignorance, greed and the love of power. My heart goes out to the victims and their families who are mourning the loss of innocent loved ones. I have seen what terror has done to Palestine, Iraq, Syria, Yemen, Myanmar, Nigeria and Lebanon, and I wouldn't wish the same for anyone else in this world regardless of their nationality or faith. Anyone could have been in that crowd - French, Muslims, Americans, Malaysians, atheists, Catholics, Buddhists, agnostics. It doesn't matter. A life is still a life.

At the same time, I fear for my brown-skinned, Arab and/or Muslim brothers and sisters in the West who will bear the brunt of bigotry, discrimination and Islamophobia. However, with campaigns like #IWillRideWithYou in the aftermath of the Sydney attack this year (which was unrelated to ISIS but made by the perpetrator to seem that way due to mental illness) and tweets like the one below, I believe there are informed and rational people out there who will take a stand against bigots, racists and Islamophobes. 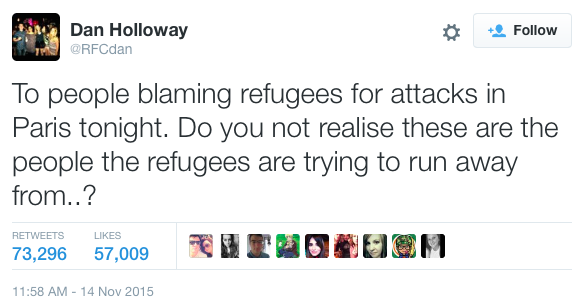 I have no doubt that ignorance and faithlessness were the root causes of these violent acts for without them I don't think any Muslim in their right mind would agree and believe that the mass murder of innocents would guarantee an entry to Paradise. It goes against the basis of what Muhammad (pbuh) taught us about the sanctity of human life and the conditions of war, such as:

What ISIS has done to you cannot be justified in any way. It hurts to see Islam being reduced into a faith that is associated with violence and vengeance, as have I expressed in a previous post entitled Understanding 'Islam' and 'Terrorism' through the Lens of Post-Orientalism. ISIS owes you the truth about the reality of who they are: a militant group with a political agenda appropriating Islam to justify their evil actions and distract you from the fact that they make USD $50 million a month from selling crude oil and earn millions more from drug trafficking while consuming meth themselves to "increase endurance and feelings on invincibility". I fail to see the credibility of their claims of 'jihad' (religious struggle or so-called holy war) when they have an agenda and ideology sustained by things that are forbidden in Islam such as terrorism, drugs and the mistreatment of men and women.

However, while my my heart breaks to see innocent people die for a terrible cause I cannot ignore the fact that this recent act of extremism and the Charlie Hebdo attack have shown me that nothing gets you international solidarity or international attention and concern (e.g. the Facebook Safety Check feature) like Western and white privilege. You don't need to hate coloured people in order to be racist: you just have to be oblivious and privileged. If you don't know what Western or white privilege is all about, here are 25 examples for you to reflect on. If you haven't seen this week's episode of Grey's Anatomy, here's a little spoiler on the conversation between Dr. Maggie Pierce and Dr. Amelia Shepherd about racism and white privilege.

"Well, it's not an issue for you. And it's not all of a sudden. I mean, it's not Mississippi Burning or anything, but it is all over. It's when people assume I'm a nurse. Or when I go to get on an airplane with my first class ticket and they tell me that they're not boarding coach yet. It's like a low buzz in the background, and sometimes you don't even notice it, and sometimes it's loud and annoying, and sometimes it can get dangerous, and sometimes it is ridiculous — like right now. This is not a small thing. I'm glad that you feel like you can talk to me about it, but I don't speak for all black people. I am not the spokeswoman. No one is. And it is kind of annoying to be asked questions like I am. But one piece of advice that I can give you, that I think we can all agree with, is that if you feel uncomfortable having done it, check your white privilege and don't do it again." (source: Grey's Anatomy proves racism still exists — even if everybody doesn't see it)

Looking at the collage above, I wonder, when will we see similar displays of international solidarity for the Lebanese victims of the twin bombings in Beirut just a day before the Paris attacks? What about the Rohingya facing displacement and persecution by their government simply because of their ethnicity and religion? The Syrians who are trying to escape ISIS themselves? Or the Palestinians who are being labelled as terrorists because many of them are desperate and tired of living under Israeli occupation and oppression? I know there is hope for humanity because of the way some nations like Germany have accepted Syrian refugees but the recent Paris attack will have repercussions. For example, Poland has already decided to stop accepting refugees.

I mourn and pray for you. But I also mourn for the loss of compassion, mercy and decency that is much needed around the world. On moving forward, we must continue breaking down barriers to knowledge and meaningful relationships between people who have more in common than they think. We need determined, educated, concerned and trained individuals who will build and drive institutions that will create pragmatic solutions to restore trust, hope and compassion and counter the systemic spread and continuance of ignorance, racism, discrimination and extremism in our families and communities.

"Yesterday I was clever, so I wanted to change the world. Today I am wise, so I am changing myself." — Rumi


We owe it to ourselves and the future generation who will inherit the world we live in. That change will begin with you and I. The last thing we should do is to allow ourselves to become paralysed by sadness, anger and fear. It's time to get some serious work done, make better choices and overcome our naivety. I think we are ready for real solutions.
Email Post
Labels: in the news Muslims in the West

Sant Kirpal Singh said…
It is good post. Everyone should read this post.I dont support Jihad and militancy in the name of Islam.