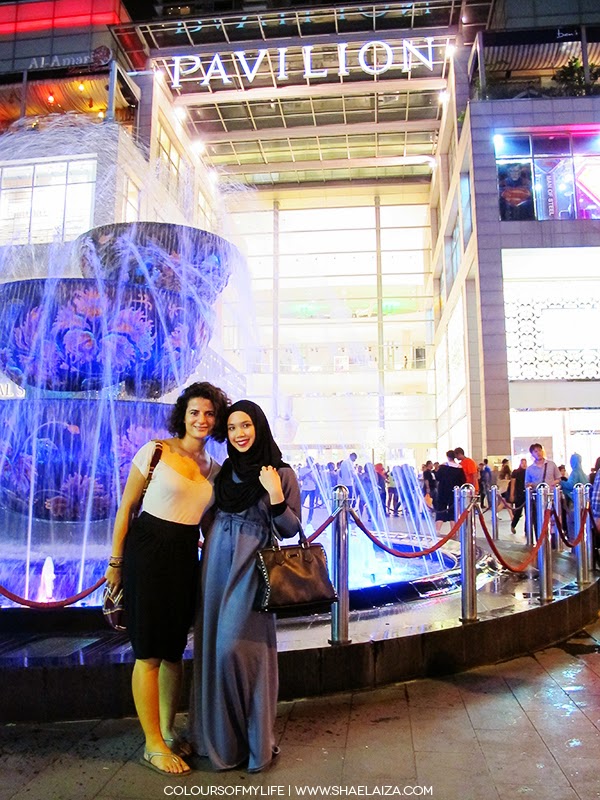 One of the things I am most grateful for is the fact that God has sent people from all walks of life to be my friends and acquaintances. The lovely young woman standing next to me in the picture above is on a fascinating journey. I first met Jihane in Dunedin when she was an exchange student from Paris. She had long curly locks and walked around campus with an air of confidence and independence.


I don't recall how we met but it must've been through some mutual Arab friends. Jihane is Moroccan but she has lived in Paris for many years. I'll always remember that she taught me the one-word Moroccan saying, "B'saha". It's kind of like "Salut". You can say it to others before they eat or drink but she once said it to me after I went shopping. I guess it's sort of like "Congratulations or best wishes" or the Islamic expression "MashaAllah".


Oh yes, I mentioned that Jihane is on a fascinating journey. Let me tell you why. In France, after five years of working (I'm not sure if this is exclusive to her company or field), one is allowed to ask for a 9 month no-pay leave. She was lucky. She was granted the leave after four years and decided to go on a travelling journey. She began in South America where she didn't fancy the food but the people were very friendly. She loved Brazil and had a taste of poverty in Bolivia. Then she went to North America for a few weeks and attended the Burning Man Festival. Her exact words were, "It was crazy. Crazy."

Jihane also made it to Kenya where she claims is safer than South America but only when you're in smaller cities and towns, not in Nairobi. I'm not sure where she travelled to after that but she spent the last few weeks in Myanmar where she attended meditation classes and ate mainly vegetarian dishes like rice with eggplants.


Does this remind anyone of Eat Pray Love?


And after Myanmar, she dropped by Malaysia for a couple of days before heading to Nepal and India to complete the last leg of her nine month journey. You must be wondering how she sustains herself while travelling. She did tell me that it is cheaper for her to travel than live in the metropolitan city of Paris. After our sushi session a lot of questions ran through my curious mind but I asked myself, "What would Brandon Stanton of Humans of New York (HONY) ask Jihane?" and these words slipped out of my lips. Bear in mind, I have paraphrased some of her answers.


"What do you look for when you travel? Do you always have something in mind before going to a country or city?"


"I use a travel guide to see what attractions are there. But I like exotic places and the feeling of getting lost in a place," she said casually with a smile.

The truth is, what I really wanted to ask was, "What are you looking for by travelling to so many places?" Because whenever I feel tired of everything all I want to do is just pack my bags and go somewhere unfamiliar to find myself or discover something new about the world. Or to just be alone so I can listen to what my heart is trying to tell my mind or vice versa.


The next day we visited Kuala Lumpur's Islamic Arts Museum with Lamia, a Tunisian woman currently residing in Thailand with her photographer husband. Jihane had met her the day before. Lamia is also another very interesting person to talk to. Perhaps when I get to know her better I will write about her too someday.  During our late lunch I randomly asked Jihane another HONY-like question,

"What have you learned after all these months and travelling to all these places?"

Jihane paused for a few seconds and then replied, "I've learned that we are all the same. That we have so much in common with each other."

"We have similar fears and desires..." I chimed in.

"Yes, yes," Jihane affirmed and nodded, "I find similar values or ideas. Like they were borrowed from each other. You know when we were at the Islamic Arts Museum just now, there was section that explained stories like A Thousand and One Nights that are today known to as Arabian tales, were actually from China."

Before we parted ways Jihane told me, "I don't know if I can go back to my old life. I think I may want to be a social entrepreneur."

I think it's an excellent idea.
Email Post
Labels: holiday and travels Islamic art Muslims in the West

Fida Islaih said…
Thanks so much for sharing her story. I take inspiration from it (:
8:25 AM

Anonymous said…
Salams.
masha Allah, nice to read...if she is visiting india,she can Google to check out to know about COORG-MADIKERI and,can learn different culture apart from all other cultures and a beautiful place of India.
12:25 PM

Phy said…
It's not easy to travel alone, especially for a lady. Like it or not, we are exposed to more dangers. I have utter respect for her courage.
10:56 AM