Why Is Everyone So Angry At Abu Eesa Niamatullah? 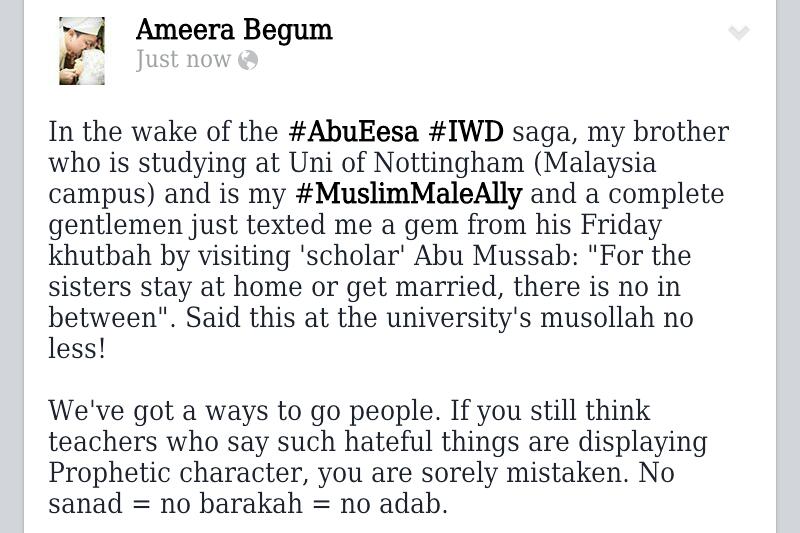 As I was typing this blog post as part of my commentary on the #FireAbuEesa issue, my friend Ameera Begum posted the above message. For the record, I didn't jump into conclusions.  I did check if he said it as a joke and yes, it was recorded by students of the University of Nottingham (Malaysian campus). Please read Ameera's Facebook post if you want to know more about what happened.

This is exactly why people like Ameera and I reacted badly towards Shaykh Abu Eesa's recent statements on his social media accounts. While the likes of Abu Eesa would find these sort of comments funny, there are actual Muslim preachers out there who are indoctrinating the minds of Muslims with false teachings under the guise of Islam.

And there is nothing funny about that.


I've followed Shaykh Abu Eesa Niamatullah on Facebook since 2010. I remember 'liking' his Facebook page after watching his video lecture on Lailatul Qadr. I then discovered that I enjoyed his sense of humour, one that some would label as "British humour". Whatever you want to call it, I know he can be witty.

It was only a few days ago when I came across his tweets about International Women's Day. I found them to be rather strange, especially coming from a Shaykh (scholar) who lives and teaches in the West. Surely, he can't think it's okay to perpetuate such stereotypes of men and women through his jokes?, I thought to myself. He teaches a televised class called "Protect This House" based on the book al-Adab al-Mufrad (Book of Manners) written by Imam Bukhari, one of the greatest scholars of Islam.

Nah, it can't be, I said self-assuredly.

And then another tweet emerged. He used an expletive on his very public account with almost 20,000 followers.

He deleted it, and after battling criticism, Shaykh Abu Eesa Niamatullah has publicly apologised on Facebook and even said he has personally responded to each and everyone who has contacted him personally via Facebook to express their concern for his distasteful sense of humour on International Women's Day, female genital mutilation, rape and the role of women.

In reaction to the criticism, innumerable tweets and Facebook comments were posted by his supporters to encourage us to accept those who err and forgive / learn / move on. Okay, we asked him to apologise and he did. Several times too. I have forgiven him because he is human, like myself, and because I know the ego (nafs) and popularity can be a test on one's character, iman and sincerity.

The next morning I woke up feeling somewhat betrayed. I tweeted:

I find it very troubling that many Muslim men and women are comfortable with calling their sisters "femi-Nazis" or "brainwashed by Muslim liberals and moderates in the West" simply for expressing how they feel about the Shaykh's patronising, condescending and misogynistic statements which he claimed to be his style of humour. 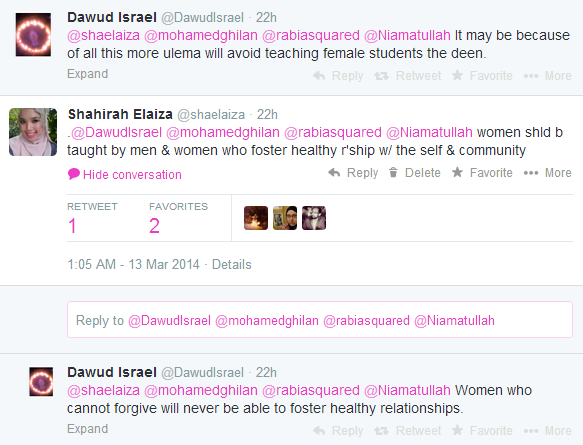 "Women who cannot forgive will never be able to foster healthy relationships."

True. But what exactly do you mean by forgiveness? Forgiving the Shaykh does not mean I have to accept his previous behaviour as Islamic. It simply means I acknowledge he is not infallible and everyone has a right to tawbah (repentance). It does not mean I should accept sexist or misogynistic comments or jokes by him or other Muslim scholars, speakers or preachers in the future.

This is the kind of attitude that asserts and perpetuates the unhealthy perception of women as emotional and irrational individuals whose voices, opinions and feelings need to be validated by men.

The astonishing thing is the Shaykh has apologised but his supporters continue to offend others, be it on purpose or not. You would think more people would understand the importance of following principles instead of personalities (an advice from Sayyidina Ali, may Allah be pleased with him). Thankfully, in one of Shaykh Abu Eesa's latest Facebook posts he condemns the poor adab of his supporters who have tried to guilt-shame others into forgiving him. I respect him for that. However, I don't know why he had to write the last paragraph here: 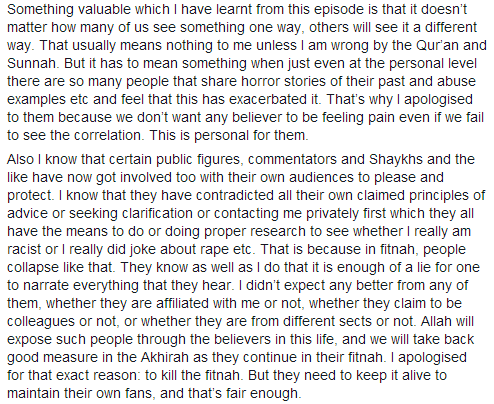 "Too involved in their own audiences to please and protect" and "they need to keep it [fitnah] alive to maintain their own fans"?

Perhaps it is true for some because let's face it, some people really love publicity, but it may not be true for most of the "public figures, commentators and Shaykhs". Once again, he is drawing the attention towards the dissenters and claiming they have a different agenda apart from simply disagreeing with the way he publicly expressed himself through his patriarchal and distasteful jokes that are detrimental towards the progress, treatment and portrayal of women.

What could possibly be his reasoning for writing such a crude statement? Allahu'alam (God knows best), but my first guess is that he's feeling the heat of the backlash and criticism. He may deny it but he's hurting and therefore labelling some women as "femi-Nazis" and accusing public figures of keeping the fitnah alive to please their followers was his defense mechanism.

But what excuse do Abu Eesa's supporters have for mocking, ridiculing and belittling those who criticise the Shaykh's "unProphetic"  jokes as a teacher and Muslim public figure? You keep reminding us that the Shaykh is only human but do you realise how ironic that is, given your lack of empathy and respect towards women who are tired of dealing with racism, sexism and misogyny, especially in the Muslim community?

Aren't women worthy of your compassion or is it only reserved for Shaykhs?

I am shocked at the level of misogyny displayed by "religious" Muslim men and women through their willingness to dismiss the core issues raised by both men and women who are genuinely concerned about the treatment of women in the Muslim community. How did this happen? How did we become insensitive  and callous towards the struggles of others? Maybe it really is as Rabia Chaudhry stated in her article, Wa'Mutasima, which has gone viral: "If a “scholar” can do it, why not?"

As my friends Chloe and Ali Idris commented, "His statements also brings out all the misogynistic men out of the woods too."

This sentence reflects that the uproar wasn't entirely about Abu Eesa but the Muslim community's compliance in ignoring / accepting / perpetuating racism, misogyny and lack of accountability for one's actions, and the dismissal of the opinions of women who are the very pillars of humanity. God willing, Abu Eesa has learned his lesson and he did apologise to the best of his ability. (I'm trying to think good thoughts here). What he did doesn't change the fact that he is our brother in Islam and we should facilitate the conditions for him to do some introspection (muhasabah).


As raised in Nida Chowdhury's brilliant piece Oh, Abu Eesa: An Apology on Your Behalf, the concern right now should be our attitude towards each other and the role of Islamic organisations and institutions today. This incident is symptomatic of the deep-rooted problems within male-dominated Muslim organisations and communities. Even though Justine Sacco was fired after one racist tweet, some believe terminating Abu Eesa's employment seems too harsh. I suggest Abu Eesa's employers arrange counselling or therapy sessions for him because he is not just a teacher but also a husband and father who is responsible for the well-being of his family.

Is this another issue that will be swept under the rug? It is Al Maghrib's call and only time will tell.

I truly believe we can rise from this conflict as stronger and better Muslims who will benefit our communities, inshaAllah. To add more irony to the story, the Shaykh just announced the birth of his daughter. May we be humbled by His Greatness and create a better world for our children and those who will inherit the world we continue to shape through our decisions and actions. Ameen.

[He] who created death and life to test you [as to] which of you is best in deed -
and He is the Exalted in Might, the Forgiving. (Surah al-Mulk, 67:2)

Email Post
Labels: faith friday in the news Muslims in the West

Al-Manar said…
I do not see why I should bother about popular preachers if I truly want to learn religion. F/B and all these are for those who have a lot of time to do nothing worth the while. That is my idea. I enjoy blogging to record my thoughts. Visitors are welcome to read. If they want to be nasty I just ignore and deny publishing their comments - full sto. I find good 'friends' from that.
11:13 AM

Shahirah Elaiza said…
@ Al-Manar: I think you made a good point about learning from popular preachers / speakers / scholars. I believe many of the best teachers do not have an online presence and perhaps they don't have to deal with the fitna (trial) of being "celebrity Imams". Allahu'alam.
5:13 AM