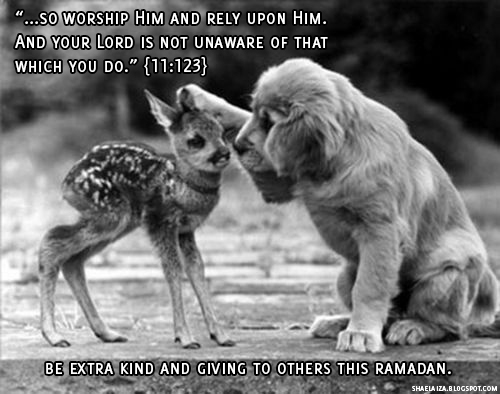 Salman Al-Farisi, may Allah be pleased with him, reported that the Prophet (sallallaahu 'alaihi wa salam) gave a speech on the last day of Shaa’ban, and said:

"O people! You are being approached by a great and blessed month. A month which contains a night that is better than one thousand months. Allah made fasting within it an obligation and made praying in that night an optional act of worship. He who performs any righteous voluntary act within it, will be rewarded like one who does an obligatory act at any time other than during Ramadan.


"He who performs an obligatory act of worship within it will be rewarded like he who performs seventy acts of worship at any time outside this month. It is the month of perseverance - and perseverance is rewarded with Jannah (Paradise). It is the month of compassion, in which the sustenance of a believer increases. He who feeds a fasting person within this month has his sins forgiven and he will be protected and released from the hellfire. He also gets the reward of that person's fasting without decreasing the reward of the fasting person."

(source: Virtues of the Month of Ramadan)


Some inspiration on the third day of Ramadan.

How is it going for you so far? I find that the biggest challenges in Ramadan does not include abstaining from food and water. Sometimes I think Ramadan comes with its own set of challenges that were tailor-made to test each and every Muslim in a different way. After all, Allah knows best what we need in order to become better people. InshaAllah khair.

"The fasting person will experience great pleasure twice: once when he breaks his fast and the other when he meets his Lord." ~ Prophet Muhammad (pbuh) {Ahmad}