Faith Friday: When in Japan... 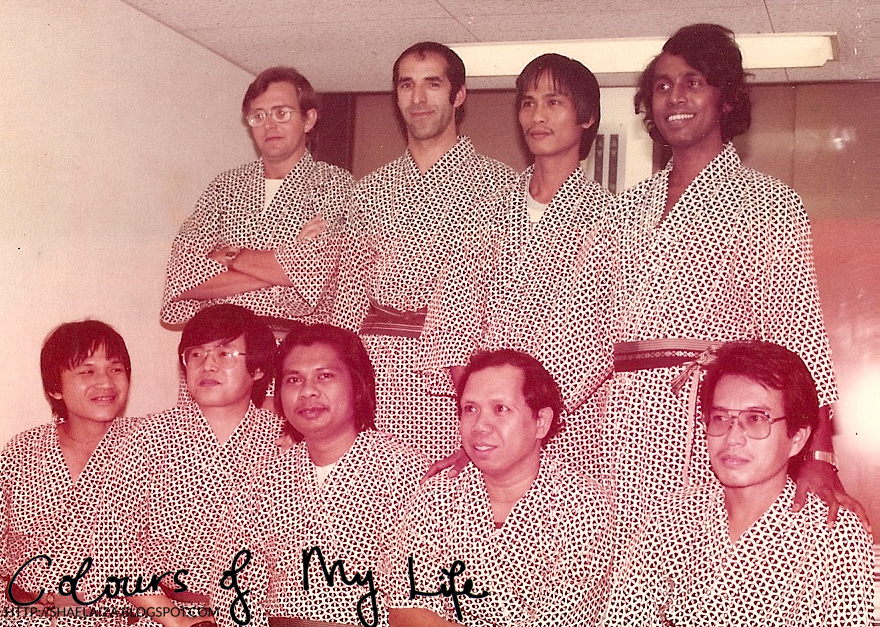 Keepin' it real in his kimono: My late Abah is the second last man from the right in the bottom row

My late Abah loved travelling and he was very much a people person too. He made friends very easily anywhere he went. He once went on a work trip to Japan where it is customary for people to greet one another by bowing. It is an act of humbling oneself and respecting the other person; the lower the bow, the more respect you have for the person. After exchanging bows with a new Japanese colleague my father made a remark.

"You know, where I come from we bow lower than this. Our foreheads touch the ground."

His Japanese friend was amazed.

"Yes, I'm a Muslim and when Muslims pray our foreheads touch the ground."

After a few months of returning to Malaysia my late father received a phone call from Japan. It was his Japanese colleague.

"Do you remember me?" he asked.

"Of course," my Dad replied.

"I called to let you know that after you told me about Islam I decided to research it and now I'm Muslim!"

SubhanAllah. All my Dad said was a few simple lines as a passing remark and I bet he didn't even know the impact of his words until he received that phone call. Every time I remember this story I am reminded of how important it is for us as Muslims to talk about Islam with our non-Muslim friends. Don't preach, just be open about it. There's no need to be apologetic about being Muslim. After all Prophet Muhammad (peace and blessings be upon him) did say:

"Convey from me, even if it is one verse." {Sahih Bukhari}

And every time I remember this story I start to miss my Dad. I wish I had the chance to ask him more about his life experiences - the places he had been to and the people he had met. I miss his anecdotes. I miss his silly sense of humour. I miss the little things I took for granted. I guess the only way to honour him today is by being a good Muslim, a good human being. Yeah, I think that's what he would've really wanted if he was still alive today. May Allah subhana wa taala bless his soul, forgive him of his sins and grant him Paradise. Ameen.
Email Post
Labels: faith friday inspirational verses and hadiths

Hanafedora said…
Oh wow sha! I pray that your dad is in peace in the hereafter. Besarnya pahala :) Clearly Allah loves him too much that he had to go. And look what Allah gave him. 2 solehah daughter. And u know what Islam say with 2 solehah daughter.... Your parents will be neighbours with the prophet in the heaven. Insya'Allah :) I miss u sha!
12:58 AM

amirahms said…
almost teared up when i read the last paragraph because that's exactly how i feel too..i miss my old man and there are times when wish i could have done more as a good daughter back then...but i know Allah's plan is the best and I should take care of my mom, pray for him and like you said..honour him by being a good muslim...insyaAllah... :)
1:39 AM

Aiman said…
Mashallah that's very inspirational story. Really! spreading the word of islam is our PRIMARY duty i guess, and we tend to forget that.
May ur aba's soul rest in eternal peace with winds of jannah in his resting place (ameen)
3:00 AM

washi said…
Thanks for sharing. All it took was a few words subhanAllah!

Btw I know what you mean about missing your Dad...miss mine soooo much too..
3:05 AM

Elisa said…
Masha'Allah, this is an amazing story. It made me tear up a bit. . .and to think your father is continuing to get rewarded in the after life because of the one person he led to Islam unknowingly!! Subhan'Allah!!!
6:49 AM

R S said…
I'm sure your father was a good and gracious man. Thanks for sharing this story, it's amazing! I always talk about Islam when I've to with my friends here in the UK. I'm not ashamed of it. The only thing I'm ashamed of is when my Muslim brother & sisters do not act gracefully in front of others.

Anyway, God bless your father and you too!
8:37 AM

Yunne Osman said…
i'm still in tears while writing this comment. i feel you sha, i really do. i miss my late dad every single day. and the only thing we can do now is to send a lot of duaas. miss you sha!
2:41 PM

Feda said…
I soo agree wit you Sha. I think people sometimes take spreading Islam to others too literally. It's the small things that sometimes make a big impact on others. Thanks for sharing such a beautiful story about your dad. He seems like such an amazing being and I can see that he's passed on his amazing gift of kindness for others to you. May Allah bless him and your family always.
3:13 PM

neri said…
what a wonderful story. thanks for sharing, sha! you always have the best posts.
10:00 PM

Diana Abdul Molok said…
I just love reading your lifestory sha, I can feel that you miss your dad much! Take care.
10:26 PM