Critiquing Freedom and Islam in Malaysia 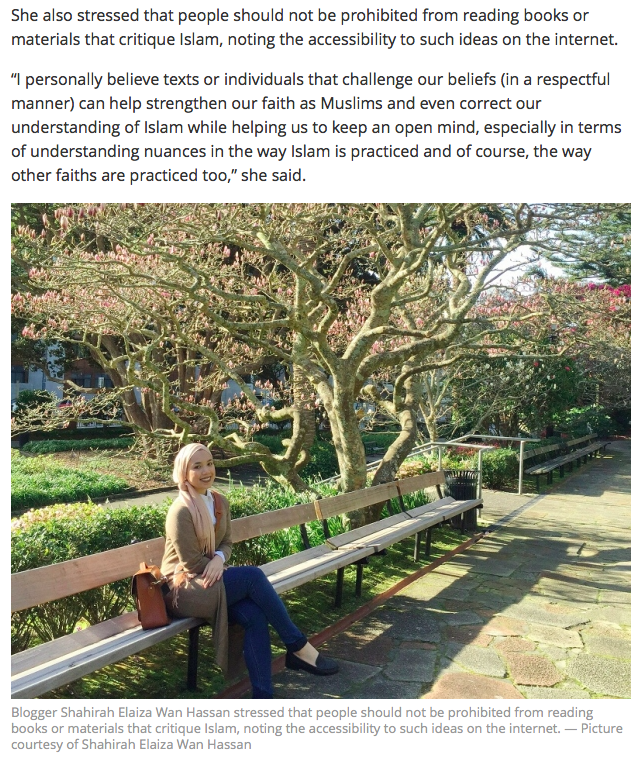 Today The Malay Mail Online published an article called 'For some Muslims, life in Malaysia is like living under a microscope'. As one of the people interviewed for the article I could tell from the journalist's questions that she was going to frame this issue in a manner that could make Malaysia sound like a difficult and intolerant country for some Muslims to live in. In fact, one of the reasons why I was selected as an interviewee is due to my status as a Malaysian Muslim who is living abroad. There is truth in the perception that Malaysia can be a restrictive country. I admit I often disagree with the way a number of Malaysian politicians or leaders tackle certain religious issues based on what I understand of Islam.

I also don't always agree with the news framing of some articles by The Malay Mail but I'm usually up for a challenge and I was happy to answer the questions. I saw it as a chance to share my perspective with others, including the journalist herself, who may have strong beliefs about Islam based on the very extreme and/or controversial cases involving Shariah law in Malaysia.

Generally, I do believe Malaysia is a relatively moderate Islamic country when it comes to Muslims who have practices against the teachings of Islam. For example, I don't hear of gay or transgender people being arrested and jailed in Malaysia simply for their sexual orientation (if I'm wrong about this, feel free to correct me). In fact, many transgender women in Malaysia work at beauty counters and beauty parlours. Moreover, if we have clubs and a gay bar that are operating legally then we are more tolerant than a nation like Saudi Arabia, for instance.

However, it is unfortunate that many Malay gay men in Malaysia are afraid to get tested for HIV out of fear of the shame or repercussion that might ensue when other people find out that they are gay, as stated in the Malay Mail article. We need to get our priorities straight. It is obviously more important to save lives and to prevent the spread of HIV than to ostracise someone who has HIV, regardless of their sexual orientation. But it is true, a Malaysian Muslim may not officially leave Islam (i.e. by changing the name of their religion on their identity cards) or to openly encourage others to leave Islam. In terms of the law, it is a crime to do these things but spiritually and physically, no one can stop a Muslim from apostasy.

Anyway, brevity is key in journalism which is why my full-length responses were not published in the article. Hence, I've decided to share the questions and my complete responses here in my blog (I have not altered or omitted anything). Please bear in my mind that I was given only three hours to respond to these questions and I do wish I had expressed myself in more eloquently. If you haven't read the article, please do so. I may not support all of the views presented in the article but I'm not quick to dismiss views that are not aligned with mine. We can learn a lot from criticisms and different points of view. I think Malaysians needs to be better (i.e. less emotional) when it comes to political or religious debates, in general.


Q: Do you think Muslims in Malaysia have less freedom than non-Muslims? Why or why not?

A: My question is, “Do Muslims in Malaysia have more freedom than non-Muslims to do what exactly?” because I do think Muslims in Malaysia have as much freedom as non-Muslims to pursue an education, to work and to live in peace. These are the things that make Malaysia one of the most popular holiday and migration destinations for Muslims around the world, particularly among Muslims in the West who wish to be able to practice Islam without being discriminated for their religious beliefs by the larger non-Muslim community. Many Muslims who live in the West desire to live in an environment that fosters wholesome Islamic values which they believe are in accordance to the Qur’an and Sunnah (Prophetic tradition).

Having said that, the Muslim ummah (global community) is a mosaic and not a monolith. Every Islamic country has its own way of implementing Islam and incorporating Islam into the governance of a country. Furthermore, every Muslim individual is going to have their own personal journey. It’s important to accept nuances in the way Islam is practiced by everyday, flawed human beings. Diversity is inevitable but the wonderful thing is it also seen as a form of mercy in Islam, especially if it does not go against the basic and principles of Islam as stated in the Qur’an and exemplified in the Sunnah and Hadith (Prophetic sayings).

It’s important to acknowledge that the definition of ‘freedom’ is a discursive formation that is context-specific and determined by the society and various factors that play a role in that society. Especially, if one is referring to a secular definition of freedom.


Q: What are the sort of areas which you think should not be regulated for Muslims? Shariah laws regulate a whole host of things like praying, drinking, dressing, having sex etc.

A: Islam is a way of life and a form of guidance for those who seek it. I believe the main role of Shariah law is to uphold wisdom and mercy in society, not to burden people with rules and rituals they deem irrelevant in their lives. Having said that, it requires a certain level of knowledge and understanding of Islam to believe in this. Malaysia is very tolerant society compared to other countries where women cannot drive or work alongside men. Muslims are also free to practice Islam publicly and privately. Today we are trying to control humanity through laws when there should be more emphasis to govern and guide humanity through virtues. This is why the implementation of Shariah law can be problematic in the Muslim society. For example, while I think it’s fair to be concerned about the way Muslims practice Islam in Malaysia today, it’s also unfair to overreact or brutally condemn people who are clearly well-intentioned. e.g. Syed Azmi who organised the ‘I Want to Touch a Dog’ event. It's also wrong for Muslims to stop people of other faiths from practicing their religion. e.g. Asking members of a church to remove the cross sign.


Q: Article 11(4) of the Federal Constitution says laws can be enacted to “control or restrict the propagation of any religious doctrine or belief” among Muslims. Do you think Muslims in Malaysia should have the freedom to read whatever books on religion/ religious materials they want to - be it on Islam or other faiths? Why or why not?

A: I understand the Malaysian government does not want to promote ideas that go against the Qur'an and Sunnah because Malaysia is an Islamic (Sunni and of Shafie madhab) country. However, my personal belief is that we have to be realistic: a person has the right to read what they want and I don’t think we should or can stop anyone from reading books or materials that critique Islam or Muslims. People can have access to these ideas and beliefs simply at the click of a mouse. I personally believe texts or individuals that challenge our beliefs (in a respectful manner) can help strengthen our faith as Muslims and even correct our understanding of Islam) while helping us to keep an open mind, especially in terms of understanding nuances in the way Islam is practiced and of course, the way other faiths are practiced too. Moreover, I have seen Richard Dawkins’ books on atheism available in MPH and Kinokuniya in Malaysia and there haven’t been any issues about that to my knowledge.


Q: When did you move to New Zealand? Which city are you living in now?

A: Initially, I moved to Dunedin when I was 15 because I wanted to experience a different education system. I am currently living in Wellington where I am pursuing my Master's degree in Media Studies.
Email Post
Labels: in the news Muslims in the West

Anonymous said…
Many Muslims do not understand what is Islam particularly. You put it in very simple words that Muslims should clearly understand - 'Islam is a way of life and a form of guidance for those who seek it."

It's all about Do's and Don'ts. Unfortunately many Muslims,globally, have gave the wrong impression to people of other faiths that Islam is the religion of punishing, narrow-minded (jumut) and sadly most Muslim Malays in Malaysia 'practising' that.

It's good to understand the different between religion & divine. Life will be more meaningful.

Aminah Luiza said…
Salam Aleikum sister, I hope you are fine!
I really loved your text and the way you answered the interview!
Kisses
www.farhanadiary.com
1:49 AM