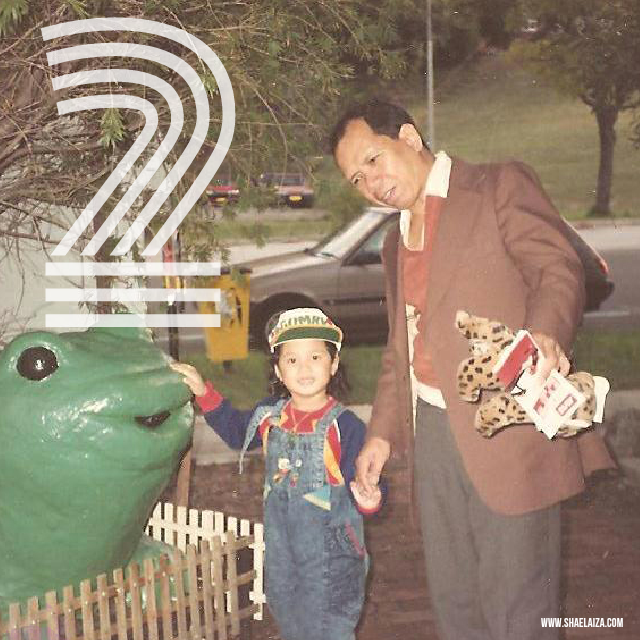 I was told my late father was a temperamental man in his younger days. But this all changed when I was born. He became very subdued and patient. So much so, in my 19 years of living with him I can count on one hand the number of times I've seen him being very angry. I guess it's true, love conquers all. Thanks for teaching me that, Abah.

They say it's important to look for the silver lining when a tragedy happens. Losing my Dad to a sudden death was probably the second best thing that happened to me. (The first being given the most loving and protective parents any child could ask for, of course.)

How could losing one of two most important people in my life be a good thing?

To begin with, the tragedy brought us closer as a family and I focused on being a better daughter for my mother.  I realised how capable I was at being strong for myself and my family. It was also only then I decided to commit to establishing the five daily prayers to the best of my ability and immersed myself in books about Islam because all of a sudden I had to confront the meaning of life. In other words, I got my life together because I had no choice. Come to think of it, every hardship I've been through has made me closer to God simply because I was put in situations where I had no one else to turn to but Him.

We tend to complain and question His love for us when tribulations fall upon us but in reality they often lead to greater things and achievements. When we respond to hardships the right way we stand to gain more from it than during times of ease because of the life-changing lessons they teach us. Who would say no to becoming a better, stronger and wiser person?

Abah, you've taught your family a lot of things but thanks for also teaching us that sometimes "bad" things happen so "good" things can happen.

P.S. I know I missed a few posts but I promise I'll make up for them after my birthday, God willing :)

This blog post series was inspired by Mark Gonzales (@ideasbygonzales) of wagebeauty.com who started his 40th birthday countdown by sharing a photo blog of reflections on his Instagram account last week. I view Gonzales as a kindred spirit and my brother in faith whose work not only compels me to be myself but to be the best version of myself.
Email Post
Labels: days to 28 loved ones

Nurul Wahdini said…
I relate to your post a lot since I lost my father in sudden death early this year. I love your writing.