The Good Word: a lesson by Prof. Al-Attas

I attended Professor Syed Naquib Al-Attas' lecture for the first time last night. I was surprised by the large number of people that were there. At least 500 people attended last night's session. In the [nearly] two years I've been back in Malaysia I've heard his name in passing but I was not aware of his magnanimity as a scholar. I am utterly embarrassed by this but I do believe the right opportunities will manifest or become apparent to us when we are ready to seize them.

During his lecture, Professor Al-Attas casually brought up verse 24 from Surah Ibrahim. I recall coming across this verse while reading this chapter of the Qur'an on the day of Eid ul-Adha. I thought, "Wow, that's really beautiful but I wonder what it really means."

My question was answered last night.

It's an analogy to describe knowledge and address the predicament we are in today due to the proliferation of information that is available to us. What we read makes an impact on our interpretations and perceptions of social (and natural) phenomena and how we react to them. The democratisation of information has its pros and cons. One of the cons: confusion. 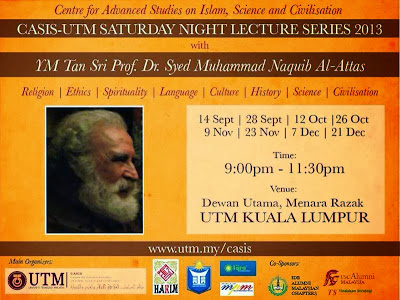 Professor Al-Attas used this verse to explain that knowledge is rooted in authoritative text — information that is regarded as reliable and trustworthy — but it is also inspired by the Heavens. I believe he was underlining the idea that divine revelation is imperative to Islamic knowledge and the basis of our understanding of our purpose in this world as Muslims should be in harmony with what has been revealed to us through the prophets (may Allah be pleased with them) and their mu'jiza (miracles) and learned scholars who have been given wisdom due to their sincere dedication in the path of servitude, such as through seeking and spreading knowledge.

Knowledge is not as easy thing to gain. Mentally, physically and emotionally. This reminds me of a hadith about one of the many ways Prophet Muhammad (pbuh) received revelation.

Zaid ibn Thābit said, Allāh sent down revelation on His Messenger, peace and blessings of Allāh be on him, and his thigh was upon my thigh and it began to make its weight felt to me so much so that I feared that my thigh might be crushed. {Sahih Bukhari}

And let's not forget this verse:


Had We sent down this Quran on a mountain, you would surely have seen it humbling itself and rending asunder by the fear of Allah. Such are the parables which We put forward to mankind that they may reflect. {59:21}

If I may add something to this, it would be that knowledge, like a tree, was created to benefit its environment and surroundings. Look at any plant or tree. It will produce flowers or fruits. Both are purposeful and beneficial in one way or another. Knowledge without benefit or action would just be information. A piece of data that is stored but not really put to good use. It's a reminder that in our quest for knowledge we have to ask ourselves: Has this knowledge strengthened my relationship with God or developed me into me a better person - improved my character and adab (manners), and not just with people I like but with those I don't always get along with, for instance? Has this knowledge translated into actions that will help me to perform my individual and collective responsibilities (fardhu ain and fardhu kifayah)?

May God guide us towards sound knowledge and keep us humble and steadfast in our efforts towards attaining success in this life and the hereafter. Ameen.

"Knowledge becomes the greatest veil of all if the knowledge is not based on humility." ~ Shaykh Umar Faruq Abd-Allah, Commentary on Ibn Ata'illah's Hikam

Wan Melissa said…
Professor Al Attas' reference to ayat 14:24 is perhaps the biggest pearl of wisdom that I took from his lecture last night. He reminded us to be selective of what we read (It's not the amount you read but WHAT you read that matters) and that it is important to go back to the authoritative texts. Otherwise we can be misled and only end up becoming confused.
10:03 AM

Al-Manar said…
I miss this great professor's lectures. Some 25 years ago, when I was living in KL, I used to attend his sessions. One of my children is a regular to his lectures today.

I was surprised you quoted {59:21}. Some twenty yers go I mde a specil request to a very well known calligrapher in Terengganu (yarhamullah) to write that very ayat on a board which still hangs high on a wallm in my sitting room. All else are not allowed to hang higher in respect of an ayat which has a deep imression in me.

Hope you will continue to benefitvfrom that great personality.
6:32 PM

Kai Darul said…
Salam sis. This is such a wonderful post. Truly, with the complicated world today, it is so hard to know which is which. We should really go back to the authentic books. In shaa Allaah, I will get my hands on authentic books soon.

I always love reading your posts. I learn a lot.

Dentistry in Doha said…
Assalamualaikum. I randomly came across your blog and just read your name, and voila, we share the same name ! ;)

Regarding the verse above from Surah Ibrahim, while in Makkah a few months back, one of the scholars who had given us a short class remarked it also refers to the Shahadah and told us to read from the tafseer of the verse, to truly understand the importance of the two lines which form the basis of our Deen -Tauhid. Reading through your post made me remember of that small class !

May Allah increase us in Iman and Ilm.